If the internet helps overthrow oppressive government regimes, why can’t it achieve something truly worthwhile, like getting Weird Al to perform at the Super Bowl Half Time Show?

Weird Al is a true music icon who is truly capable of putting on an entertaining spectacle. Not only does he deserve to perform at the Super Bowl XLVII halftime show, but he really should be included in the Rock & Roll Hall of Fame as well.

There have been a few online sources that have pitched the idea of Weird Al Yankovic performing at the 2013 Super Bowl Halftime show. There is even an online petition that you can sign. The goal is to collect 1 million signatures. At the time of this writing, there have been just fewer than 20,000 signatures. But we the people can mass together to bring about lasting social change. But to make this happen you need to sign it and spread the word.

What I’m going to do now is provide 10 compelling reasons why Weird Al should perform at the Super Bowl Half Time Show. Basically this is a list my ten favorite Weird Al videos. But after watching the videos you should be able to realize the sheer entertainment value that Weird Al is capable of providing.

This Polka Medley of popular hits is from his latest album Alpocalypse. The polka medley is a regular staple (and highlight) of his albums. This isn’t necessary my absolute favorite polka medley of his, but it is the only one where he has released an official video for. Also being it is of current hits, it would be a good indicator of the type of material he would include if a medley was to be included as part of his Super Bowl Half Time Set.

This is from 1999’s Running with Scissors. It tells the entire story of Star Wars Episode I: The Phantom Menace, from the perspective of Obi Wan Kenobi. Nearly 6 minute of epic comedic gold.

#8: Trapped in the Drive Thru (Parody of R. Kelly’s Trapped in The Closet)

This is from 2006’s Straight Outta Lynwood. I included this more for the song than the video (the animated video is funny though). It is an 11 minute detailed narrative of ordering hamburgers at a drive-thru. Al’s take on R. Kelly’s bloated epic hits a comedic bull’s eye.

#7: Perform This Way (parody of Lady GaGa’s Born This Way)

This is also from Weird Al’s latest and 13th album Alpocalypse. This video was nominated for a Grammy for best video. Incidentally, the original GaGa video was not.  The video is kind of freaky, but highly humorous and entertaining.

#6: Eat It (parody of Michael Jackson’s Beat It)

This was from Al’s 1984 album "Weird Al" Yankovic in 3-D”. This was the first of two memorable Jackson’s parodies.

#5: You Don’t Love Me Anymore (Original)

This is from 1992’s Off the Deep End. The song is an original, but because there where those that mistook it as a parody of Extreme’s “More Than Words” the video was a parody of that.  Also unfortunately the official video posted on YouTube is an edited version of the original. The unedited version continued where the “Smells Like Nirvana” video left off, and is even more hilarious. This is one of my favorite Weird Al originals. I love the tongue and cheek earnestness of the delivery.

This is from 1996’s Bad Hair Day. This song also caused a mini controversy. Weird Al is respected in the music community because he makes sure that he receives the artist permission before he records the song (for parodies under the fair use laws, he is not required). Through Weird Al’s record label he was under the impression that Coolio gave him permission. But Coolio claims that he never did. Nevertheless the song is hilarious, and it shows off Al’s versatility. He can flawlessly nail any genre of music. This is part of the reason why he remains relevant after over three decades of music.

This is from 1988’s Even Worse. This is the second time that Al hit pay dirt with a Jackson parody. Michael Jackson was a fan of Yankovic and allowed him to use the same video set that he used for Bad. The video won the Grammy for Best Concept Music Video.

This from 1992’s Off the Deep End. This is another song which displays Al’s amazing versatility and his ability to adjust to whatever the current musical trends are at the time. The video parody was just as hysterical (if not more so) than the song.

Weird Al is great! Actually he is weird! :)
His father has Yugoslavian origins, like do I. So, reason more to love him! :)
His parody on Lady Gaga's song Born This Way is the best! 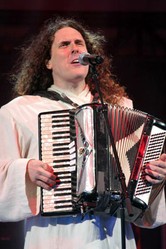 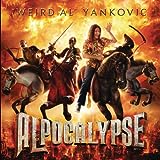