Waking up on Sunday 13 August 1961, Berliners discovered that Berlin had ceased to exist. Berlin Wall went up 50 years ago, now a top tourist attraction.

The Berlin Wall divided Berliners into East and West citizens. Today it is the city's top tourist attraction

When in the early hours of Sunday 13 August 1961, the last moviegoers had returned from Western theatres and restaurants, the East Germans rolled out kilometers of barbed wire. The Berlin Wall was a fact. Little did they know that fifty years on, the Wall would be Berlin's top tourist attraction.

On that August morning, Berlin had ceased to exist. Instead Berliners now lived in either West or East Berlin. The forty-three-kilometer long wall sliced right through the heart of the city. Divided families no longer could visit or communicate with each other. Floodlit by night, guarded by attack dogs and watched over by trigger-happy guards, the wall separated West from East. Yet many East Berliners tried to escape but only few succeeded. Australian-born writer Anna Funder retells their story in Stasiland: True Stories from behind the Berlin Wall.

Australian born Anna Funder worked in public relations for a German television service in Berlin. Stasiland won the Samual Johnson Prize for nonfiction in the UK.

The Ministry for State Security better known as the Stasi or the Secret Police knew everything – where you went, what you bought, whom you telephoned and with whom your wife flirted. The stories from behind the Wall are all true stories.

Miriam is still searching to find out what happened to her husband. She had been on the Stasi blacklist ever since she tried to make it over the Wall as a teenager. A few months after she married, her husband was arrested. When the Stasi tell her that her husband committed suicide, she knows this is not true.

Not all stories are tragic. The Stasi recruited a woman to spy on her colleagues. She agrees and tells everyone that she is now a supergrass. After she blew her own trumpet, the Stasi never bothered her again

Stasiland; Stories from behind the Berlin Wall

Why the Berlin Wall Was Built

After the Second World War, Berlin was split up into four sections administered by Britain, the US, France and USSR. A few years later in 1949, The Soviet zone became the German Democratic Republic (GDR). In the early days, east and west Berliners moved about the city with relative ease. People living in the east held jobs in the west. They visited relatives and friends and spent evenings at western movie theatres, went shopping during the daytime and dined in western – capitalist – establishments.

Every day, hundreds of thousands of East Berliners commuted to well-paid jobs in the West. Far more serious, the GDR economy showed no growth. The open border meant that thousands of skilled workers and scientists could flee East Germany simply by walking across the border or taking the U-Bahn, the Subway, into West Berlin.

For the next twenty-eight years, East Germany denied the existence of West Berlin. City maps published in the east showed the western side as a blank.

The Lives of Others starring Ulrich Mühe

The Lives of Others

During the cold war, The State Secret Police, the Stasi, closely watched its citizens comings and goings. Only very few people were allowed to lead private lives, pro-socialist playwright Georg Dreyman is one of them.

When a government official falls for Dreyman's actress girlfriend, Christa, he offers her leading roles in the state-sponsored world of art. He also guarantees her access to western prescription drugs to satisfy her addiction. Jealous of Dreyman, the party bigwig orders a Stasi functionary to bug Dreyman's apartment so that he can be accused and sent to prison.

Berlin Wall, a Top Tourist Attraction that No Longer Exists

Right from its erection in 1961, the Berlin Wall has been a popular tourist attraction. Viewing platforms allowed Westerns a peek across into East Berlin. Western graffiti artists could not resist its smooth surface and turned it into master pieces. When the wall came down in 1989, the most prized souvenirs were fragment with colourful graffiti.

A walk along East Side Gallery is closest you can get of what the wall must have been like. This 1300-m stretch is the best preserved section of the Berlin Wall. Artists from around the world daubed it with post-1989 graffiti. It is strange but true, Berlin's most popular tourist attraction is the Berlin wall, even though only a few fragments still stand.

The Berlin Wall by Frederick Taylor

When the barbed wire went up on Sunday morning 13 August 1961, Berlin had become a divided city. Guarded by dogs and patrolled by trigger happy guards, the Berlin Wall affected the lives of Germans and non-Germans. Frederick Taylor tells how the Wall went up initially and how it was perfected so that no one could cross this barrier. How the wall had a direct impact on the lives of Berliners and how it affected both Germans and non-Germans. The Berlin Wall is the story of how the Wall divided Berlin and its people.

How the Berlin Wall Came About and What It Looked Like

Weekend Berlin - From The Wall to Checkpoint Charlie

Berlin Alexanderplatz - Shopping and History
Berlin's Alexanderplatz, a huge square, rests in the shadow of Berlin's 365-meter TV tower, and is easy to spot. Repeatedly bombed during World War II, the square had to be re-designed German. GDR city planners cluttered it with prefab offices and concrete blocks.

Berlin Wall 50 Years On: Families Divided, Loved Ones Lost
Half a century after the infamous German wall was built, two ex-East Berliners look back at how it changed their lives forever

Interesting and informative article and the video was also very good.

I've been to Germany but never made it to Berlin. Very interesting article.

I was born in a communist country in Europe, so the Berlin wall was the shame of that regime which we all hate.
Thanks for a great post reminding us of a piece of history we don't want to forget.

@MugTreasuresByBrenda
The Wall is one of the most moving sights in Berlin, although very little is left of it.
Tomorrow it will be 50 years ago that it went up. Berliners could not wait to demolish it in 1989 and hardly anything of the original wall is left. Today some Berliners regret this is a little because a poignant monument has (almost) disappeared

We did visit the wall two summers ago, I am glad we did because it is such an important part of history.

I had been in Germany the year before the Wall came down. For years I had read stories and during my tour of Germany and Eastern Europe I visited many places that I had read about, except the Wall. I always regretted that we weren't able to go while I was there. This reminded me of all the stories.

The article was quite interesting and the video excellent. Thank you for sharing this with us. Very informative!

I also watched the coming down of the wall on TV. It is a bit like the assassination of John F Kennedy, almost everybody remembers where they were that day.

Very interesting article. I enjoyed the video too. The day it came down has always stuck in my memory. I remember watching it on tv.

Thanks a lot. I added this video. It is very impressive. I have never seen the real wall myself, only what is left of it, but I am very familiar with it and its history. Probably because we learnt about it in history lessons, after all we, the Dutch, are close neighbours with Germany. 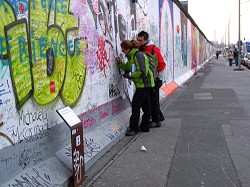 Stasiland: Stories from Behind the Berlin Wall
100%  43   18 frankbeswick
Other History