7 Ideas For A Jake And The Neverland Pirates Party

Are your kids a fan of Disney's hit animated musical show, Jake and the Neverland Pirates? If so, have a look at these 7 ideas for an awesome birthday party! 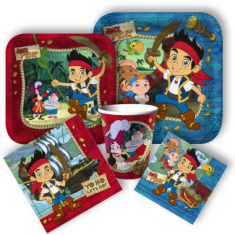 In June, the Jake and the Neverland Pirates Party Supplies will be available. But, that shouldn't stop you from having a party centered around Disney's hit animated musical.

Jake and the Never Land Pirates is a spin-off of Disney's popular Peter Pan franchise.  The show stars Jake, Izzy, and Cubby, as they face troubles from Captain Hook, Smee, and the tick-tock crocodile.  Additionally, the live-action songs are performed by the Never Land Pirate Band.

For more on Jake and the Never Land Pirates show, head over to the official website.

Remember, keep a lookout for the Jake And The Neverland Pirates Party Supplies.  Until then, if you're interested in seven great Jake and the Never Land Pirates party ideas, continue reading below.

Head over to Jake and the Neverland Pirates Coloring & Create page on the official website.  The Coloring & Create page includes everything from printable coloring pages to printable pages that can be used to create things like the Forever Sword to a treasure chest.  Make sure you have the right materials and printer for the job, and that you print plenty out for all kids.

Smack it, and watch the gold candy coins fly out!

One-by-one, have each kid wear the two pirate eye patches, one over each eye, and have them whack the Treasure Chest Pińata a couple times with a stick.  Repeat until the candy treasure flies out everywhere!

You will want to mark off your yard to represent the two pirate ships, with water in the middle between them.  Next, split up the kids into two teams, place the two teams on either side of the yard representing the pirate ships, and make sure they know they cannot go into the 'water'.  Finally, give both teams a bucket of black water balloons, and then yell, "GO!"

Additional ideas for this game is to include toy/plastic sharks in the area of the yard that is water.  You could also include various items to hide behind for kids so that they can dodge/avoid water balloons.  And, you could even add in additional rules like in dodgeball. If a kid gets hit by a balloon, they are eliminated.

A fun way for the kids to get some exercise

For this party idea, you will need two flags.  Divide the kids up into two teams.  It's important that the teams are fair, so that one team doesn't end up with all the faster kids.  Next, designate two areas across from each in your yard that are the pirate hideouts.  Then, place a flag in each of the pirate hideouts.

The goal of the game is one pirate team to capture the flag of the other pirate team.  But, there are a few rules that the kids will need to follow:

Who knew that a bunch of plastic gold coins and a sandbox could be so much fun?

Do you have a sandbox? If so, then this idea is perfect for your Jake And The Never Land Pirates or pirates party! First, you'll need some plastic gold coins or treasure coin favors; these  that will be the doubloons.  Next, bury the treasure coins in the sandbox.  Now, hand out plastic shovels and buckets to the kids, and instruct them to dig up the gold doubloons from the sandbox.  For additional fun, other prizes could be buried for the kids to find!

The ultimate party idea for any pirate party!

Of course, a Jake and the Neverland Pirates party isn't complete without a treasure hunt.  To begin, plan out your treasure hunt based around your house and yard.  Start by determining points-of-interest, and then draw a treasure map based upon those points of interest.

I Would Love To Hear About Your Own Party Ideas! Share them below.