Walt Disney Animated Classics is about to get its 53rd animated feature called Frozen. Frozen themed party supplies are expected to launch before the release of the movie.

There isn't much known about Disney’s upcoming animated feature named Frozen other than it’s based upon Hans Christian Andersen’s The Snow Queen. However, the movie is expected to release on November 27, 2013. Set to launch earlier in the same month as the movie are the official Frozen party supplies. Currently, only the tableware is confirmed, which should include plates, napkins and cups. But, it’s still very early so there could be additional Frozen themed party supplies such as favors, balloons and other decorations to go along with the Frozen themed tableware.

A New Take On Hans Christian Andersen's The Snow Queen

Frozen follows the adventures of Anna as she seeks to undo a curse put on her by her sister the Snow Queen Elsa.  To undo the curse Anna must travel through an icy world filled with danger from the landscape, frozen cold-hearted warriors, and even the occasional mystical troll.  But, Anna will find help in the form of a mountain man named Kristoff, his single antlered reindeer named Sven, and a snowman named Olaf.

“Wonderfully flawed, but fearless,” as described by co-director Jennifer is the reason why the co-director feels that Anna will be a highly relatable character.  Kristoff, on the other hand, is “trying to understand women – basically.”  For more about the characters check out Entertainment Weekly’s interview.

Kristen Bell (as Anna), Idina Meznel (as Snow Queen Elsa), and Jonathan Groff (as Kristoff) are confirmed to be voicing the main characters.  In addition, it appears that Josh Gad (as Olaf) and James Pasierbowicz could also be lending their voices to the movie.

Since the Frozen party supplies are a ways off planning a Frozen birthday party can be a bit tricky at the moment.  There are plenty of things to draw from when planning a Frozen birthday party, though.  For example, the story is set in a cold, frozen world which means that the use of blues and whites ifor the color of the tableware, balloons and other decorations will help set the mood.

Anna and Elsa (the Snow Queen) are both part of the royal family, which means that favors such as princess crowns or other princess related items could work.  Games and activities could center on mystical creatures or magic.  An activity that I think the kids would love is the creation of their very own Olaf snowman or Sven one-antlered reindeer.

As we get closer to the Frozen party supplies launch and know more about the movie we’ll take a closer look at what we can do for a Frozen birthday party.

Are you looking forward Disney's Frozen? 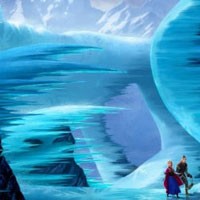