A Brief History of the Metropolitan Police, London

The Metropolitan Police was formed in 1829, under the guidance of Home Secretary Sir Robert Peel. It started as a force of 1013 and has grown to over 31,000 officers today.

The London Metropolitan Police Force was formed in 1829 after the system that had previously been in place, run by parish councils, had become less effective due to large scale population growth. The police wore blue uniforms to distinguish them from the army, and were mostly unarmed, a situation which persists until today. Women were not allowed to join until 1919, almost a hundred years after the formation of the force. The headquarters is known as New Scotland Yard, although when it moves back to Victoria Embankment, it will just be known as Scotland Yard.

The Metropolitan Police was formed on 29 September 1829.  The police have been given many nicknames over the years: Bobbies, Peelers, Cops, Rozzers, Fuzz, Filth, The Bill, The Old Bill, The Boys in Blue, to name but a few.

The famous Bow Street Runners were not, as is often believed, part of the Metropolitan Police, they were founded in 1742 by the author and magistrate Henry Fielding, and were attached to Bow Street Magistrates’ Office.  They were known as “thief takers” but there weren’t many of them - only eight - and they investigated crimes that the parish constables handed over to them; they were the first detective force.

Prior to the formation of an established police force, most policing in the UK was the responsibility of the local government of the day, which was usually the parish council.  Each parish had a number of constables and parish watchmen.  The constables were local people, unpaid, and the job was rotated among the people of the parish, which was not popular.  The watchmen were paid to do the job.  Those of us who live in London now will tell you that different councils have different ways of doing things, and it was no different back in the 19th century which led to differing standards and differing success rates relating to crime management.

Largely because of high value thefts on the River Thames and the influence of companies such as the East India Company, the Marine Police Force was established in 1798.  It originally comprised 220 constables who were assisted by a thousand dock workers and is now generally regarded as being the world’s first modern police force.  The Marine Police Force merged with the Metropolitan Police in 1839.

As London grew in size, with the Industrial Revolution, the system of constables and watchmen was becoming less effective.  After much debate and the establishment of a parliamentary committee, Sir Robert Peel, who had been Home Secretary since 1822, proposed the Metropolitan Police Act.  The Act gave control of policing in London to Peel, although the City of London remained entirely separate and established its own police force later.

To allay any fears of the public about a military force being used to deal with civil matters, Peel intentionally did not follow a military system for the force.  The uniform was blue, to distinguish it from the red jackets of the army and they were not routinely armed with anything other than a wooden truncheon and a rattle that could be used to summon assistance.  Side arms, in the form of flintlock pistols were issued for use in firearms incidents, which were fairly common in those days as Protestants were allowed both to own and use firearms.  Additionally, burglaries usually involved firearms.  The rattles were replaced by whistles in the 1880s.  The majority of Metropolitan Police officers (and, indeed, those in other UK forces) remain unarmed.

The original police force was made up of two Commissioners (Lieutenant-Colonel Sir Charles Rowan and Sir Richard Mayne), eight superintendents, 20 inspectors, 88 sergeants and 895 constables (compare that with the 31,000 plus officers today!) 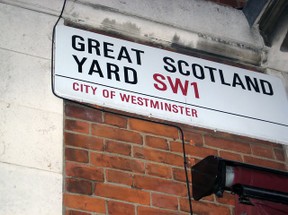 The volunteer Women’s Police Service was founded in 1914.  Women were first allowed to join the force proper in 1919, but they dealt mainly with prostitutes and juveniles.  It wasn’t until 1937 that they were allowed to take fingerprints, and they didn’t carry handcuffs nor make arrests, unless specifically told to do so, until 1923.

It wasn’t until 1973 that the first Woman Detective Constable was appointed, in the same year that the Women’s department became fully integrated into the force, meaning that women carried out many of the same roles as men although they didn’t get equal pay until 1974.  That didn’t mean that they were necessarily allowed to do the same jobs though, it wasn’t until 1977 that a woman became a traffic officer and 1979 when a woman became a dog handler.

The first two Commissioners occupied a private house at 4 Whitehall Place.  The back of this opened into a courtyard, and the back of the house was used as a police station.  The back entrance opened onto a road called Great Scotland Yard, hence the headquarters becoming known as Scotland Yard.  Where the name Great Scotland Yard originated is not entirely clear.  Over the next 60 years, other adjacent premises were occupied, as well as buildings elsewhere.  By 1890, having outgrown these, the headquarters moved to Victoria Embankment.

In 1967, a bigger site was needed and the headquarters moved to its current location, New Scotland Yard, in Broadway, however, when the police move out of there (anticipated in 2016) they will move back close to their old home on the Embankment. 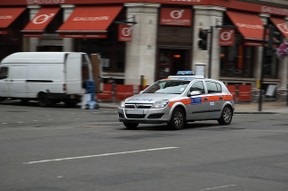 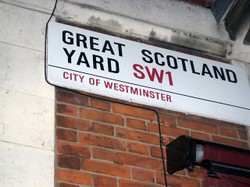