A House is Not a Home Without a Cocker Spaniel

This page is devoted to owning a Cocker Spaniel. We will cover history, feeding and care, breeds, health, gifts for the Cocker or it's owner and more.

The cocker spaniel is now a show dog and pet though originally it was a sporting dog who was excellent at flushing out a bird known as a woodcock. The Spaniel family of dogs originated in Spain but by the 1930s the Spanish dogs had vanished. There are currently two breeds of the spaniel - the American Cocker Spaniel and the English Cocker Spaniel.

Their coats come in a variety of colors and some are one solid color while others are mottled. To qualify as a show dog they should be 28-32 pounds. This is a perfect size for an apartment or condo, but, of course, a single family home works also if you are that fortunate.

Health of Your Cocker 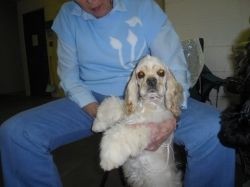 The most common ailments of cocker spaniels include cancer, eye and ear problems. They usually live 10 or 11 years.

Do NOT play games which might encourage aggressive or disobedient behavior with your dog. Avoid these: chasing, tug of war, biting, wrestling. Also do not allow your dog to stick his head out the window of a moving car - that a good way to blind your dog if a bug hits it in the eye!

Photo by Marsha Camblin is Copyrighted  If you like this photo, I have both a trinket box and a phone cover with it on zazzle (see below).

Be Forewarned of Some Potential Health Problems 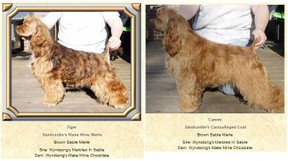 When purchasing a new Cocker Spaniel you would AVOID the Merle colored coat if you want a healthy long lived dog. This coat pattern is also NOT accepted by the American Spaniel Club. Studies have found that Merle Spaniels often die shortly after birth, or are more likely to be deaf or blind or have other serious defects. Unscrupulous breeders will often price the Merle Spaniel at a higher price stating that the coat is rare. Buyer beware, if you want a healthy spaniel go for any coat color other than Merle.

Which is Your Favorite Cocker Breed?

Demo of Grooming Your Cocker Spaniel

This is a Photo of a King Charles Spaniel Breed

Cocker in the Furry Scurry Parade

Care and Grooming of Your Cocker

As any of you with wood floors will discover you must regularly clip your dogs nails.  This is easy but these days often owners take the dog to the spa.  If this is not in your budget, you should purchase a special kind of dog nail clipper.

More of My Animal Articles to Enjoy

My Unique Brown Tabby
This is the story of finding a feral cat and deciding to bring him home.

Got a Side Gig?

Do you want a cocker? Or have you owned one?

I really enjoyed reading this article! I have just launched a book on The Cocker Spaniel care , here is the link http://www.amazon.co.uk/dp/B00JKIE3RY

We had cocker spaniel puppies when I was very little. I've seen photos but don't honestly remember them. I think they are beautiful dogs.

Oh, Thank you so much!

One of my favorite dogs. I'm pinning this to my Dog's and Puppies board.

Read this page if you want to learn to be as happy as the Dalai Lama. A child...

Starting with John James Audubon there have been many artists who have focuse... 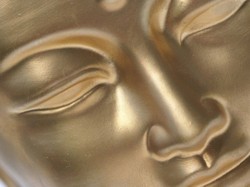 Read this page if you want to learn to be as happy as the Dalai Lama. A childlike playful attitude is the place to begin. This article quotes many Buddhist leaders.
62%  7   6 MBC
Contemporary Art 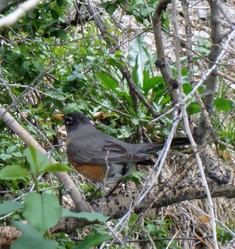 Starting with John James Audubon there have been many artists who have focused on birds. Painting, sketching, photography and sculpting of birds are some of the modalities used.
Loading ...
Error!