A Parish with Two Churches

I lived in a very unusual parish where we had multiple Roman Catholic churches. Two of these churches were practically across the street from each other.

When I grew up I lived in a city that was, at that time, over fifty percent Roman Catholic. That city is New Orleans, and had been settled by the Catholic French, came under the rule of Catholic Spain, then went back to French control. So, there were many Catholic churches in the city. And, while it was often possible to walk to a neighboring parish, people in my parish had two churches to choose from. And each was rather large.

This article is being written as I recall things from the early and mid-fifties.

A Shared Name with the Parish

Saint Mary Assumption Church stands on a street corner of Josephine Street and Constance Street.  It faces Josephine Street, and one wall extends back Constance Street to its bell tower.  The church has, as was often the case with older churches, beautiful stained glass windows.  The ceiling was painted, and the central figure was God the Father.  I remember asking as a child who is the face of.

As with most older churches, many statues could be found within.  And, the pulpit was an elevated platform with a rail, and a set of stairs ascending to a gate by which the priest could enter and leave.  Above the pulpit was a shell designed to direct the priest’s voice through the congregation.  This was all attached to one of the massive columns that stood in two rows throughout the church.  The only problem was it was literally past a few rows of the congregation, a situation made necessary by the column placement,

I recall the church was often rather dark, for the windows were on the north and south sides.  With the low latitude of New Orleans, sunlight is easier to capture with east and west windows.

One curiosity thing was the small clasps mounted on the backs of the pews.  I was told that in earlier times men wore hats, and they would hang their hats from the clasps.

Behind Saint Mary Assumption Church was a rectory.  Across Constance Street from the rectory was Saint Alphonsus Ligori Catholic Church.  This was also an impressive building, and also a rather large church.

Saint Alphonsus Church has a gray façade in front, which made it stand out.  Inside, it was brighter than Saint Mary Assumption Church, possibly due to better lighting, and possibly because the equally impressive stained glass windows faced east and west.

The clasps that held the hats were in better repair, and much easier to use.  This caused problems, since it was in Saint Alphonsus that we in the parochial school had a daily morning Mass, and some of the boys would press the button to open a clasp, then allow it to close with a loud noise.  This in turn caused one or more nuns to search for the source of the noise.

Yet a Third Church

A short distance away was a small chapel, which also belonged to the parish.  I have never entered the chapel, but have long been aware of its existence.  It is a wooden structure, diminutive compared to the two churches.  Yet it has long stood.  Now it has been relocated a short distance and made into an historic building.

Why More than One Church?

Was There a Need?

Well, the parish was staffed by priests of the Redemptorist Order, and there were many priests.  Even in the fifties there were rules of the Catholic Church that were still in effect, many since have been changed by necessity.  Of those rules was one that required priests to celebrate Mass once, and only once, each day when the rule against Mass being celebrated was not in effect, such as on Good Friday.  So, we needed a different priest for each Mass.  Another rule that has been changed was the rule that required total fasting before receiving Holy Communion, starting at midnight.  So, congregations at earlier Masses were large, and would reduce in number during the day.  So, a large Catholic population could easily fill more than one church, as often happened.

If the above were the only reason it would be great, but there were biased people.  The area of the parish was in the heart of the Irish Channel, and there were many working class Irish.  When the German immigrants also settled in the same area they too had many Catholics among them.  So, Saint Alphonsus became the Irish church, and Saint Mary Assumption became the German church.  As for the small chapel, that was for the French who lived in the area.

Both Churches Had Side Alters

What Was Their Purpose?

Church rules require a priest to celebrate Mass daily, with the exception mentioned elsewhere in the article.  But, another rule is there be a congregation of at least two.  So, since there were many priests, too many for weekday Masses, priests would come to a side alter once Mass was started for the school, and finish first.  They would not preach a sermon, and the Communion line would often not exist.  So, both churches had a multitude of side alters perhaps six each, and it was not uncommon for multiple priests to be celebrating Mass at the same time.  Of course, on Sunday there were enough places in the schedule for a parish with so many churches that the side alters were rarely used.

One for Each School

On the other side of Saint Alphonsus was a school building used by the high school, with the elementary school sharing its cafeteria and auditorium.  The only building on either side of the block on Constance Street not belonging to the parish was a religious store.

On Josephine Street, alongside Saint Mary Assumption Church, was another convent for the Notre Dame nuns.  These were the staffers of the high school, whose main buildings were across Josephine from the church and convent.

One day a nun took my class into Saint Mary Assumption Church.  This was unusual, since the school used Saint Alphonsus Church.  She showed us relics, then pointed across the communion rail at a large marble slab that had an inscription.  It was a tomb.  In fact, there were several tombs there.  But her interest was in just one of them.

I did not understand then, but one of the tombs is that of Blessed Seelos.  He was a Bavarian who came to America, served as a bishop in Pennsylvania, and finally arrived in this parish.  He worked with the Irish during the yellow fever epidemic, contracted the disease, and died.  Now, one of the convents is gone, and the other has been converted to the Blessed Seelos Visitor’s Center.

One Is Still Used as a Church

Saint Mary Assumption Church is still an active roman Catholic Church, but Saint Alphonus has been repurposed.  It is now a community center.

The day I too the pictures for this article, which required a special trip into the area, people were crossing the street.  They were exiting a side door of Saint Mary Assumption Church and going into Saint Alphonsus.  The walk was probably less than one hundred feet.

In the fifties we freely chose between the two churches.  We had to first pass Saint Mary Assumption.  One way a decision would be made was to count how many candles were lit.  Two meant a low Mass, six meant a high Mass with some singing, and twelve meant a solemn high Mass with much singing.  If six or twelve candles burned we went to Saint Alphonsus.

The introduction image is mine.

Rethinking who can be ordained a priest might help augment the numbers of priests, just focusing on single men is a mistake. But you are right, the more people who come to church, the more vocations there might be.

Currently, parishes are being merged. This is due to too few priests. Most of the closed churches are allowed to open for weddings. But, when parishes merge they are close to each other. The nearest parish to the one mentioned in this article is about six blocks away. The problem seems to be vocations. We are asked to pray for vocations, but I am not certain we are asking for what is really needed. I feel there will be vocations enough to take care of us, and maybe what we should pray for is to have more people start attending churches in our current secular age. If more people come to church, the vocations might just follow. So, perhaps our focus should be on prayer to fill pews. Then allow God to do the rest.

I am fascinated to see how the Church is faring in other locations. Here we don't have a resident priest . The priest from a neighbouring parish visits three times a week. That's it.

I know of churches that have been replaced, then repurposed, in other parishes, but this is the only case I know of where multiple churches were in use at the same time. We have some places where a priest travels,but not walk one way or the other depending on which church he is going to.

A good article focusing on local religious history, Such focused study is a vital part of history.

In my parish, which is extended by amalgamations, we currently have three churches, but two are redundant, and ne will probably be demolished. The other contains work by the sculptor/architect, Pugin, so is preserved for historical reasons. 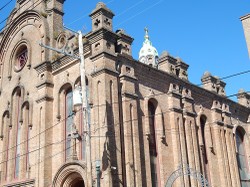