Everyone has seen pictures of the sleek dogs wearing a muzzle and a jacket in full extended gallop on a race track. There is more to the greyhound than just speed.

If you have never seen one close up, they can stand 26 to 31 inches tall and weigh from 60 to 88 pounds. They have a very short, easy to manage coat and a narrow head with ears that bend to the side.
For many years greyhounds were thought be related to the sight hounds of the middle east because of the similarity of appearance. However in 2004 DNA analysis showed that the greyhound was actually more closely related to herding dogs.
The name greyhound is thought to come from the old English word “grighund.” Hund certainly translates into “hound” but “grig” is less obvious. No one is really sure what it refers to. It does not relate the color grey since greyhounds come in almost every color.
The greyhound is the only dog mentioned by name in some versions of the Bible, including the King James version, as one of the four stately things mentioned in Proverbs. (Some versions translate this as a rooster.) 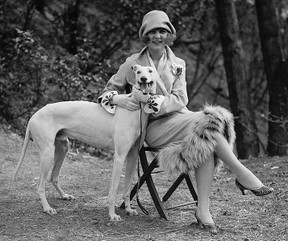 Greyhounds have a lovely temperament. I've never met one that didn't love people. They are by nature gentle and affectionate. Older greyhounds and retired racers tend to lounge about, enjoying a soft bed and a quick run in a fenced yard or a sedate walk on a leash.

Greyhound puppies, however, can be surprisingly active and destructive. Two of the greyhounds that I adopted were puppies. (My third one was an abused older dog.) My first  puppy was about 4 months old when I took him in. He would race around the yard like a mad man. Occasionally, he would tear past a branch or some other protuberance and catch his skin. The vet’s assistants nicknamed him “Patches” because he had so many little scars where he had been stitched up.  When he was about a year old, I decided to give him a chance to prove that he could be left alone for a short period of time without having to be crated. When I came home I discovered that he had gotten on my bed and slit my mattress right up the middle.

Sadly, he was kicked by a horse and killed at a young age. 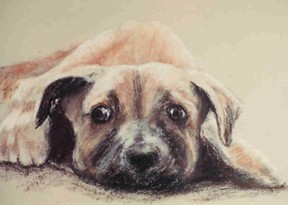 When I got the second pup at 8 weeks of age, it seemed like all I did was follow him around the house and take things out of his mouth. He was either asleep or in motion.

My older retired racer had been abused by people. It was amazing how much he loved everyone considering what people had done to him. He was one of the sweetest dogs I have ever known, in spite of his bad breath. His greatest pleasure in life was a nap on the couch. Greyhounds are very angular dogs and do need a good thick soft bed even if you don’t allow them on the couch. 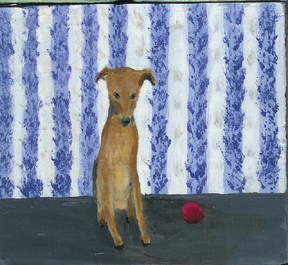 Trainers who use the force method of training say that greyhounds are difficult to train and not very intelligent. The fact is, they do not respond well to force. Their eyes will glaze over and they will stiffen themselves to resist any physical pressure. They do, however, respond very well to positive training, especially if started young.

The second pup I had I trained for obedience competition as well as lure-coursing. He missed earning the Dog World Award for high scores in obedience by only a few points. I had trained him with a clicker and food rewards. He loved the training sessions as long as I kept them short and fun.

I’ve lived with both greyhounds and Border collies, reputed to be the most intelligent dog. I have to say, my greyhounds were every bit as intelligent, but responded to things in their own way. Both of my younger greyhounds learned, on their own, how to open the refrigerator door. They would wait until I was gone, flip the door open with a paw and help themselves unless I remembered to shut the kitchen door.

None of my Border collies ever thought of that.

When I tried to teach my dogs to play flyball, they had to learn to step on a lever to shoot the ball in the air. My Border collies got so excited that, at first, they never connected their accidental hits on the lever with the ball flying out.

My greyhound realized by the third try that there was a connection. He studied the box. You could almost see the wheels in his head turning. Then he very deliberately lifted a foot and planted it on the lever.

Border collies are certainly one of the most trainable dogs. Greyhounds don’t have that trait built in. If a Border collie in the hill country disobeyed his handler and moved the sheep in the wrong direction, he could be sending them over a cliff. Not all that useful. Greyhounds, on the other hand, were bred to hunt by sight, not command. And the fastest dogs in the race were the ones to be bred. Obedience had nothing to do with it. But if there is enough motivation, a greyhound can surprise you with their intelligence.

I became involved in the sport of lure coursing when I adopted my first young greyhound. I wanted to give him an outlet for his hunting drive without actually hunting. A lure coursing club was nearby so I joined up. We had practices and trials and I attended as many as I could.

Lure coursing consists of pulleys set in the ground where a line is strung so that it makes a roughly circular path. A white trash bag is attached to the line and a machine drives the line around controlled by an operator. During a trial, dogs of the same breed run in elimination heats in groups of two or three. Then the winners go on to run the best of breed and best in trial races.

Tests are often run to introduce a new dog to the lure and fun races often will allow any breed to give it a go. It’s fun to see a dog like a Sheltie or Golden retriever run. They have a good time too.

Note the black dog is "cutting the course." He will lose major points for this even if he gets to the finish line first.

Some might think greyhounds are aggressive since they traditionally wear a muzzle when racing. The muzzle is just to prevent nipping during or after a race since the adrenalin is pumping and the prey may disappear leaving them only another dog to bite at. In all the years of lure coursing my greyhounds without muzzles, I never saw one bite at another dog. The white trash bag was another story.

Although I trained my young dogs so that I could let them run off leash, I never let them loose anywhere near a road. Greyhounds can run over 40 mph and are second only to the cheetah for acceleration. Even though they were obedient in the show ring and at home, their incredibly strong prey drive would override their training and they could get into trouble if they saw something that they perceived as prey, whether a small dog, cat, rabbit or squirrel.

I don't have a greyhound now, and I do miss their gentle presence. I hope someday I'll have the room and a fenced yard so I can have another one. Someday.

Absolutely. Even my puppies came from a greyhound rescue.

No dog in the U.S. has seen such a radical and drastic change of fortune. Ear... 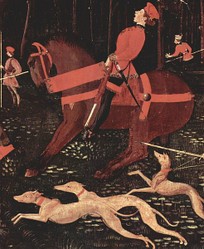 In 1970 Dr Lehr J. Brisbin discovered wild dogs living in the uninhabited forests of South Carolina. He had discovered what is called the American Dingo or the Carolina Dog.
56%  7   5 LiamBean
Large Dog Breeds 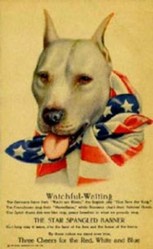 No dog in the U.S. has seen such a radical and drastic change of fortune. Early in the last century the Pit Bull was a nanny dog. Specifically acquired as a canine baby-sitter.
Loading ...
Error!