The Norwegian word for waterfall is Fors and this word is found frequently in Northern England for a waterfall. It is a remnant of Viking settlers and influence on the local area.

Comments about my photos encouraged me to post some more of my recent pre-winter trip.

Many parts of North West England are similar to Scandinavia so it is little wonder that there are many old Norse settlements and words appearing in place names .

On my trip to Cumbria for my Autumn break this week, I visited a small Force, Aira Force. Force being the anglicised spelling of Fors. Force and Spout are local words for waterfalls with a spout being a cascade waterfall where the water runs down stone like steps to the river below.

Aira Force is in the English Lake District near Ullswater and the village of Watermillock. Both names have Norse origins too. The stream which gushes over the fall is called Aira Beck. Beck is another Norse word meaning stream that is also used a lot in the North of England. The waterfall and beck flow into Ullswater, the nearby lake. This name is certainly of Norse origin but the exact etymology is uncertain. Some say it is named after a local chief Ulf or wolf's wasser , which became Ullswater.

I can see why the word Fors is used because the water, although calm along the beck, comes out at the narrow top with a huge speed and force.

On the way up to the Force, the air is heavy with the scent of conifer trees. Some trees had some very red berries. ( below )

The Autumn colours were beautiful, empowered by the light and recent rain.

These stone bridges occur all over the Lake District. They are a regular feature of the area.

This stone bridge is over Aira Beck on the way up.

We walked up the beckside to the top along by Aira Beck. The air was beautiful but it was a little slippy under foot.

Can you see the bridge over the top of the force?

One very brave and gutsy little two year old grandson. If he can climb up the beck and the force then most people can!

The Lake District was inhabited first by Britons, to whom Norwegian settlers were added. There was no significant Anglo-Saxon settlement, so other than the Romans, who left forts but no bridges, bridges have to be either Briton[but there is no evidence of these] or later. Local bridge building would have been influenced by inherited cultural styles, so that's where the Norwegian influence came in, whatever age the bridges are. I suppose that bridges were periodically rebuilt using techniques handed down in the area, so that is where the Norwegian style came in.

Aire Force is in the English District which is a National Park and subject to VERY strict building regulations! Even a new bridge would have to blend in to the locality so this makes it difficult to put a date on things. In this particular part of the Lake District, most place names and old buildings date back hundreds of years to old Norse settlements.

I think it's easy to see why The Norse settlers decided to settle here. As you ay it is beautiful. I love the word Fors for a waterfall. It signifies the water very well.

Ah thank you and yes. It is very beautiful but also easily accessible to most walkers. Our grandson walked up to the top.

The air is so clean and crisp. I love going especially in Autumn.

Beautiful country and beautiful pictures also. It looks like a wonderful trip.

It is a marvellous place for them to be . The air is magnificent.

TY for the photo comments.

Wonderful photos! Our two year old grandson loves visiting us in the Lakes and throwing stones into water, jumping in the becks .....etc!

Ty. Each country has its beauty but you are right in that The British Isles is well blessed with beautiful locations. Maybe our bad weather makes it beautiful; the lakes are always full, the landscape is verdant and lush because of the rain.

Cumbria and Cheshire are my favourite places. They are beautiful but also full of History.

This is quite a beautiful place. Your country has much beauty if one knows where to look.

If you're of Irish descent and want to try the food of your ancestors,or are ... 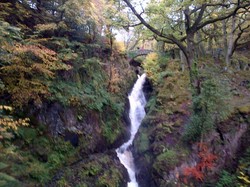 This morning I have been up Tegg's Nose! That sounds fairly disgusting but it was a delightful experience.
100%  76   13 Veronica
Food & Recipes

If you're of Irish descent and want to try the food of your ancestors,or are interested in World or Irish food, here's a " taste of Ireland". It's more than Irish stew or soda loaf
Loading ...
Error!