Neither the FBI nor the Untouchables could make a murder conviction stick to the notorious Alphonse Capone, eventually jailed for avoiding taxes. Chicago would like to forget him.

Despite what many people think, Al Capone was not Italian, he was born and bred in the USA although of Italian parents. His murderous passage through Chicago has been documented in films and books and his name remains synonomous with crime and violence. Visit Chicago today and you will be hard pressed to find evidence of the gangster past: the authorities in that city would like to forget all about Capone, Moran, Dillinger et al, but their legend seems to grow stronger by the day, proving what Capone himself proved, that prohibition merely encourages that which it tries to probibit.

Looking for the Places connected to Capone 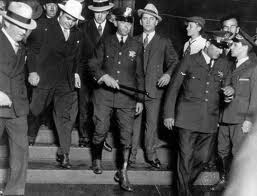 Nearly sixty-five years after the Chicago mobster’s death, tourists from all over the globe flock to Chicago looking to visit the scenes of Al Capone’s most violent acts.  However, city officials shun association with the man whose Prohibition-era exploits made his name synonymous with the city and most of his old haunts have vanished.  The leaders have managed to bulldoze away most of the evidence connecting the city to the man known as Scarface.  He was the world’s most notorious gangster but Chicago wants to wash its hand off him.

But if you know where to look, or if you sign up for one of the many #gangster’ tours you may catch a glimpse of Big Al and the members of his outfit. You will also be directed to a restaurant where you can sample his spaghetti marinara and some bars where you can knock back a few drinks and pretend that prohibition still rules.

Born in Brooklyn, New York to Italian parents, in January 1899, Alphonsus Capone was involved with juvenile criminal gangs from a very early age.  In his twenties he moved to Chicago where he rose to the top of the crime tree by engaging in smuggling, bootlegging, and running numbers and prostitution rackets – all of which included bribing government officials.  And as we all know, this was all accompanied by a lot of violence. 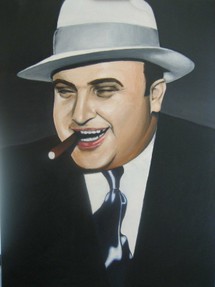 He fought the powers-that-be for years, was charged with murder on more than one occasion but never convicted, and was only eventually brought down by FBI agent Eliot Ness, head of The Untouchables, on tax evasion charges.  Ness got his man eventually, but not for the crimes he committed.  Still, tax evasion got him in the end, and he died in 1947.

The Life of Crime of Al Capone

Countless films, TV shows and books have helped cement the image of the free-wheeling bootlegger and made him a subject of many books and films.  The St. Valentine’s Day Massacre is a particularly chilling account of the murder of members of a rival gang penned up in a garage and gunned down by his henchmen. On February 14, 1929, seven gangsters were shot and killed in what became known as the "Saint Valentine's Day Massacre." While it was never proven, it is believed that the men were murdered by members of Capone's gang, or hit men hired by Capone. The target was “Bugs” Moran but he escaped injury when the go-ahead signal was given too early, before Moran had even arrived. 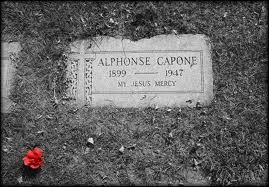 Faint black and white images from films like Scarface starring Paul Muni, or the more recent Untouchables with Robert de Niro have to make do to fill the imagination, because the Chicago officials make no effort to promote the memory of the man or his legacy.  Yet, ask anyone who visits Chicago what they most associate with the city and most will say, Al Capone, Prohibition, bootlegging, and violent crime.

Capone as a Tourist Asset

Sure, Chicago has fine galleries, a thriving theatre area, philharmonic and symphony orchestras of world status, an aquarium second to none alongside a brilliant planetarium, beautiful lakeside walks and parks, but it is the bit of grit in the oyster that makes the pearl, and Capone could be Chicago’s pearl.  Or, if not its pearl, then an oyster worth opening. 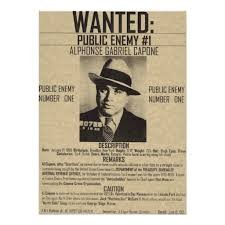 How many hits per month, I wonder, does the name Al Capone throw up on the web?  How long before Chicago will acknowledge that sometimes “crime pays” when it comes to tourism?

There is only one company in Chicago, to my knowledge, that runs tours taking in scenes associated with the gangsters who once ruled the city, and if you ask the right people you can get a brochure.

But don’t ask at the Tourist Office.

Landmarks for a Self-Guided Tour

Unfortunately a visit to the site is just to remind yourself that you were there.  The original building is long gone but tourists still flock to the site and, cameras raised, photograph the place where the garage once stood, just as they stand and photograph his supposed home, or where some of the hotels associated with him once stood.

The Biograph Theater on Lincoln Avenue on Chicago's North Side

This is where FBI agents gunned down gangster John Dillinger as he was leaving the cinema. The Biograph is now home to the Victory Gardens Theater group.

This has the honor of being the final resting place of Al Capone and is just outside off the I-290 expressway. Besides Capone there are other gangsters from the era buried there like "Deany" O'Banion and the "Terrible" Genna brothers.

Famous for the shootout scene in the movie The Untouchables. Although the incident was entirely made up by Hollywood (and the "baby carriage" episode is a sort of homage to The Battleship Potemkin) it is worth stopping by just to see this fictional point of mobster history.

This is a unique interactive dinner theater, set in the era of Chicago gangsters offering dinner as well as a musical show with “gangsters” and their “molls” who sing songs from the era’s composers like Gershwin and Porter.  The Venue is decorated as a 1920s "speakeasy" and although it is kitschy it makes for a fun time. Tickets: $60 - $70 per person

Billed as "Chicago's Original Gangster Tour" this is a 2-hour driving tour in a jet black school bus which will guide you round many of the remaining landmarks and more of the “supposed” hangouts.  Period costumes worn and commentary in the vernacular – great fun.    Reservations: 773-881-1195:  Price: $30 per adult.

I agree. Tourists just love 'associations' whether they are with saints or sinners: in fact the balance probably swings more to the sinners side of the scales!

Like it or not, Al Capone and Chicago are inseparable. I am sure tourist enjoy visiting the places connected with important moments of his life. He is also great reminder of saying about taxes and death...
Thanks for all the interesting facts!

Gosh, that was quick! I'd just put it up. Yes, I agree with you that Chicago could do with embracing its gangster past. It's a land of myth and legend now anyway, so far in the past and connected to old movies that no one really takes it very seriously. That said, I love the city, its theatres, jazz clubs and lakeside walks - and The Second City Stand Up.

I enjoyed this article - I think, Chicago should embrace it's 'dark side' - it's all part of its social history. The best movie scene for me of the St Valentine's Day Massacre was in 'Some Like It Hot'!

We've all heard about fingerprints and their use in criminal investigations but how have they come to be used so widely?
72%  0   11 RupertTaylor
True Crime

Russian economist Alexandra Kalinina, says that corruption in her country is “not a problem, but a business”
Loading ...
Error!