Russian economist Alexandra Kalinina, says that corruption in her country is “not a problem, but a business”

Transparency International measures corruption in 177 countries. In 2013, it placed Russia in 127th spot, a very poor placing for a country whose economy is the eighth largest in the world.
Worldwide Governance Indicators says Russia ranks among the top fifth of most corrupt countries.
Official government statistics say the “shadow economy” represents 15 percent of all the country’s output.
According to Boris Nemtsov, an outspoken and sometimes-jailed critic of Vladimir Putin, corruption in Russia amounts to 25 percent of the country’s entire economy. The World Bank says it’s way worse, with bribery, swindles, and kickbacks swallowing up 48 percent of Russia’s Gross Domestic Product.

Few Western businesspeople are tempted to swim in the cesspool of Russian enterprise; those that do often live to regret it. 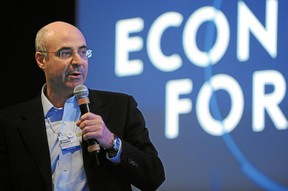 In 1996, American businessman Bill Browder (left) began putting money into the new Russia; at its peak, his hedge fund company Hermitage Capital had more than $4.5 billion invested there. But in 2005, he was kicked out of Russia and declared a “threat to national security.”

Nineteen months later his investment fund was re-incorporated under new owners. Mr. Browder told the CBS News program 60 Minutes (February 2014) that his company was “stolen using documents seized by the police.” The new “owners” (Mr. Browder says they included, police, tax officials, and lawyers) then applied for and got an illegal $230 million tax refund. 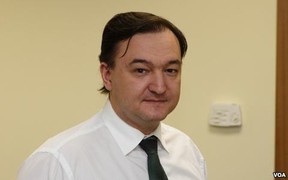 Mr. Browder hired anti-corruption crusading lawyer Sergei Magnitsky (right). He uncovered the swindle and demanded an investigation. Instead, Mr. Magnitsky was arrested and held under harsh conditions in prison. His health declined and he was denied medical attention. In November 2009, Sergei Magnitsky died in prison; Mr. Browder and several others say he was murdered.

Bill Browder doesn’t pull his punches. He says “The Russian regime is a criminal regime. We’re dealing with a nuclear country run by a bunch of mafia crooks.”

A report from USA Today (February 2014) notes that “… investors have been voting with their feet… multinational corporations have abandoned the country’s frigid economic climate.” Since the worldwide financial troubles of 2008 an estimated $350 billion has been withdrawn from the Russian economy.

Russian citizens suffer because of this capital flight. Raymond Baker, Director of Global Financial Integrity points out that “Hundreds of billions of dollars have been lost that could have been used to invest in Russian health care, education and infrastructure.”

The Charbonneau Corruption Inquiry in Quebec has uncovered some sleazy construction deals among politicians, officials, and businesses. However, Quebec’s grubby kickbacks are nothing compared with what happens in Russia. 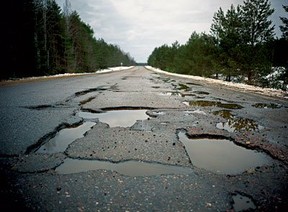 Roads in Russia are in very poor condition. Contractors charge governments inflated fees and produce shoddy work. RT News (Russia Today) reports (December 2012) that “On several occasions officials came to inspect existing roads only to find out that they have not been built at all, despite being present on local maps.”

Also according to RT News “A World Bank report estimated that between $25 and $55 thousand dollars are spent on each kilometre of road in Russia yearly, compared to $9 thousand in neighbouring Finland, a country that experiences similar temperatures;” the difference being money that is siphoned off into the wallets of government officials and contractors.

Russian economist Alexandra Kalinina points out that “In the end, the Russian population pays for this corruption. For example, some experts believe that the rapid increases in tariffs for housing, water, gas, and electricity, which significantly outpace the rate of inflation, are a direct result of high volumes of corruption at the highest levels.”

Until 2010 Yury Luzhkov was Mayor of Moscow, a position he’d held since 1992. He was also vice chairman and a founder of Vladimir Putin’s political party United Russia 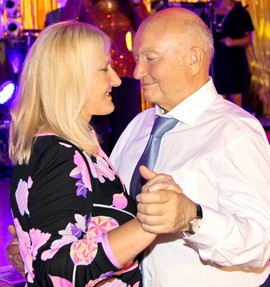 In a leaked diplomatic cable the U.S. Ambassador to Russia John Beyrle described Mr. Luzhkov (shown at left with his wife) as being at the head of a “pyramid of corruption.” He said the edifice included police, security forces, criminal gangs, law courts, political parties, and the Kremlin.

Ambassador Beyrle’s cable said “Luzhkov oversees a system in which it appears that almost everyone at every level is involved in some form of corruption or criminal behaviour.”

The core of the sleaze is called “krysha.” The word means “roof” and describes a structure of protection from prosecution for business. It also provides protection from criminals. A restaurant owner, for example, is forced to pay bribes so his business won’t be closed down by health inspectors or set on fire by street thugs.

Mr. Luzhkov’s wife, Yelena Baturina, heads a construction company and is said to be the richest woman in Russia. Not surprisingly, when Moscow called for tenders on construction projects Ms. Baturina’s business was frequently the winning bidder.

In 2010, Mr. Luzhkov was fired by then-President Dmitri Medvedev. It’s said his dismissal had nothing to with his corruption but it was because he was getting a bit uppity and challenged Mr. Medvedev’s power. 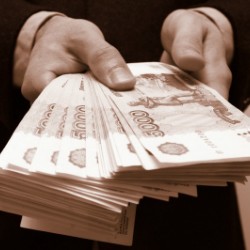 Writing for The Huffington Post (February 2012) Nataliya Vasilyeva comments that “Bosses tend not to punish their employees for taking bribes, but rather demand a share. Observers say the Kremlin has tolerated the wrongdoing because it’s the main source of income for millions of bureaucrats whose support is crucial to Putin.”

Ms. Vasilyeva adds that “One study estimates that Russia’s 143 million people paid about 164 billion rubles ($5 billion) in ‘everyday’ bribes in 2010. Half of Moscow residents and nearly 40 percent of all Russians have been in a situation where they felt a bribe was necessary to solve their problems, according to the joint research conducted last year by the Public Opinion Foundation and the Indem Foundation, which studies corruption.”

The cost of the 2014 Winter Olympics in Sochi, Russia was budgeted at $12 billion. The Vancouver winter games of 2010 cost $7 billion 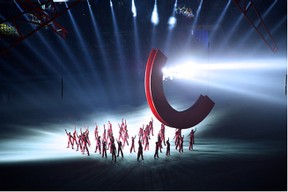 With most of the invoices paid, experts agree the actual cost has topped $51 billion.

This makes the Sochi Games by far the most expensive Olympic event ever staged; its cost tops the total of all previous Winter Games added together.

Anti-corruption activist Alexei Navalny said “Athletes are not the only people who compete in Sochi. Officials and businessmen also took part in the Games and turned them into a source of income.”

And that source of income appears to have been generous, very generous indeed. Boris Nemtsov claimed that between $20 billion and $30 billion was skimmed off the Sochi Games contracts.

Russia’s Anti-Corruption Foundation explained how many of the swindles were worked. Bids were rigged so that companies with friends in high places won contracts. Loans were then made to the contractors by the state-owned Russian Development Bank. The contractors never paid the loans back and the bank was reimbursed from the national government budget - that is taxpayers were on the hook.

The Foundation alleges “The companies which were awarded contracts worth at least $14.2 billion are closely linked to the state officials including Vladimir Putin.” 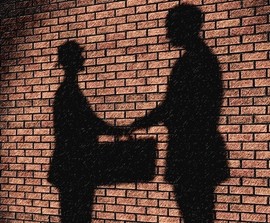 Critics say Russia’s efforts to stamp out graft are puny. They have listed all of Vladimir Putin’s promises to clean up corruption going back to 2000 and note that the practice is now more common than 14 years ago when he first came to power.

As if to point up the futile nature of the fight against dishonesty there have been some nasty goings-on in Russia’s anti-corruption agency. Lieutenant-General Denis Sugrobov was the director of the Interior Ministry’s Main Directorate for Economic Security and Anti-Corruption. In May 2014, he and 12 other officers in his department were arrested and charged with corruption.

Sugrobov’s deputy, Major General Boris Kolesnikov, jumped to his death from a sixth-floor window while being interrogated. (There is a long history of this sort of thing happening in Soviet days, when suspects under questioning “jumped” from high windows).

But, the charges against Sugrobov and Kolesnikov may have been trumped up anyway. Here’s Mark Galeotti (Moscow Times, June 2014): “… extortion is so wide spread within the security services, that this type of major investigation is unusual. I’ve heard cases, for example, of police internal affairs officers who gleefully investigate cases of corruption in the ranks not to arrest the perpetrators but to sell them their silence.”

So, it may well be that the people tasked with shutting down corruption are among the most corrupt themselves.

“Corruption in Russia as a Business.” Alexandra Kalinina, Institute of Modern Russia, January 29, 2013.

We've all heard about fingerprints and their use in criminal investigations but how have they come to be used so widely?
40%  4   4 janisleofwight
True Crime

How John Waller, highwayman and perjurer spent the last hour of his life.
Loading ...
Error!