Cliven Bundy is a Nevada rancher and the 67-year-old patriarch of a Mormon family of 14. He is also a passionate believer in states’ rights who claims the federal government has no legitimacy. In common with other members of the “sovereign citizen” movement he claims that the local county sheriff is the ultimate authority in America whose power trumps that of the federal government. Bundy is the poster-geezer for right-wing extremists and a man who makes mainstream conservatives shudder with embarrassment. 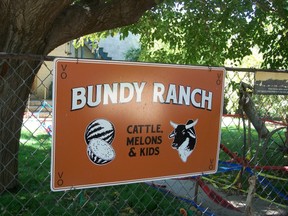 For 20 years, Bundy grazed his cattle on federal land near Bunkerville, Nevada but refused to pay grazing fees. He claims his Mormon ancestors grazed the land long before it became federal property so it belongs to him.

Nah-hah courts have said on numerous occasions, adding that his cattle are in an area that is closed to protect an endangered species of tortoise.

By the spring of 2014, the overdue account had reached $1 million and the federal Bureau of Land Management decided it was time to collect the arrears.

In April, and armed with more court decisions than you can shake a gavel at, federal officials began to round up cattle deemed to be trespassing. Within a week they had penned up several hundred cattle most of which carried the Bundy brand.

Cliven Bundy put out the word to fellow government-haters to rally to his support, and they did 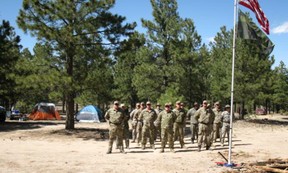 A showdown with government is meat and drink to groups such as Oath Keepers, the White Mountain Militia (right), and the Praetorian Guard.

Their views involve a stew in varying measures of a belief in the supremacy of the individual, fundamentalist Christianity, gun ownership, that immigrants are destroying American culture, and that government is the enemy of the people.

The FBI lists some of these organizations as America’s top domestic terror threats.

Several hundred of these people showed up at the Bundy ranch, among them so-called militiamen in battle fatigues and bristling with guns.

The rhetoric was strong including such things as we are willing to use "lethal force to defend our rights against government thugs.” With Bundy himself braying “We’re about ready to take the country over with force!”

Role of the Media 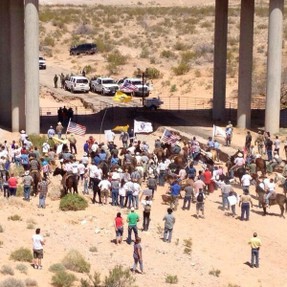 Fortunately, cool heads prevailed. Federal agents facing rifles aimed at them from a highway overpass were ordered to retreat and hand Bundy’s cattle back.

The U.S. government said its officials retreated in the interests of public safety but that it “continues to pursue the matter aggressively through the legal system.”

The Bundy story attracted massive media attention and the Democratic congressman in whose district Bunkerville sits is none too happy about it.

Congressman Steven Horsford wrote “conservative media and politicians pounced, quickly lionizing Cliven Bundy as a patriot. They handed Bundy a megaphone … and, with apocalyptic fanfare, Bunkerville was transformed into some fevered final bastion of freedom.” 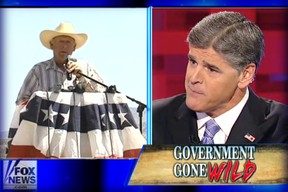 Fox News, and particularly Sean Hannity (right), one of the network’s top shouters, rushed to Bundy’s defence, saying the situation served “as proof that we have a government gone wild today in America!”

Nevada Senator Dean Heller (Republican) said of Bundy and his supporters are "patriots.”

Texas Senator Ted Cruz (Republican) said the Bundy standoff was “the unfortunate and tragic culmination of the path that President Obama has set the federal government on.”

Standoff from Bundy Point of View 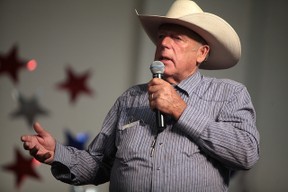 Enjoying his time in the media spotlight, Cliven Bundy felt empowered to offer his opinion on many subjects and eventually got around to his views on African Americans and slavery:

He did not address his own personal seizure of a government subsidy by grazing cattle on government land and not paying for the privilege. 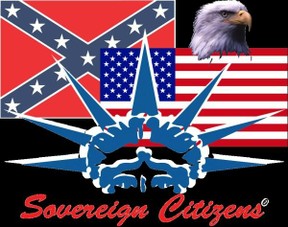 Cliven Bundy quit the Republican Party, which no doubt was happy to see the back of him and probably cautioned him to make sure the door didn’t hit him in the butt on the way out.

He joined the Independent American Party and told a gathering of that far-right group that God had told him to engage in a civil war with Washington. This was, he said, part of a very old struggle between good and evil.

About 100 people attended the meeting and Bundy sounded a bit peeved at the low turnout and used his own version of grammar to say “Where is all of your college students? Where’s our young and where’s our old? Where’s our black and where’s our brown? Where are you people? Aren’t you interested in freedom and liberty?”

The Anger Boils Over

Bundy supporters take the next step

There are plenty of angry people with paranoia about what they call government tyranny. Two of them showed up in Las Vegas a couple of months after helping out at the Bundy standoff.

Jerad and Amanda Miller engaged in what they called a revolution against government oppression. Jerad, in one of his many online rants said “To stop this oppression, I fear, can only be accomplished with bloodshed.”

On June 8, 2014, the heavily armed couple shot and killed two Las Vegas police officers and a customer in a Wal-Mart. They barricaded themselves in the store and engaged in a 15-minute gun battle with police until they both died.

The Millers espoused white-supremacist and sovereign-citizen ideologies that exist on a continuum that draws some of its oxygen from disaffected far-rightists whose lives may not have gone so well and who feel the need for someone to blame.

“A List of Cliven Bundy’s Supporters, Now That We Know He’s a Pro-Slavery Racist.” Arit John and Abby Ohlheiser, The Wire, April 24, 2014.

Sadly, no amount of factual evidence will penetrate the bubble of ignorance that surrounds all extremists.

As someone wisely remarked "The difference between genius and stupidity is that genius has limits."

I have just had an encounter with an extreme right person. I was at the shopping centre when he walked to my side and said that we ought to start intimidating immigrants in the streets. I told him that I didn't want to intimidate anyone. This went on for a minute or so, before he strode off.

Besides the fact that as a portly sixty four year old, I am hardly the best candidate for his race war commandos, I did not tell him that I have a son in law who is half Sri Lankan while my future daughter in law is a black woman from Portugal; and I am of immigrant descent myself.

My daughter is a case of multiracialism. From me and her mother she is 3/4 Irish and a quarter English; her husband has an English paternal grandfather and a French paternal grandmother. His mother is Sri Lankan with some Dutch ancestors; and they live in Anglesey. The extreme right had better give up on us

Wow, Jo, I clicked on the link, and that was some rant.

That wasn't the only incorrectly spelled word during our discussions. That in itself doesn't suggest lack of intelligence (one of my cleverest friends can't spell to save her life), but several other factors did. He lost his temper when I suggested that he research the facts of the Holocaust for himself.

"Where's our black and brown?" Bundy asks. Their absence is hardly surprising when he wonders whether blacks were better off as slaves!

Jo - Your interlocutor can't even spell Gypsy (never mind that they prefer to be called Roma) correctly, but this does rather point up the fact that many of these folk seem to have missed out on education and intellectual development. Don't want to be snotty superior about this, but it does seem to me that the last sentence of my piece, over which I struggled a lot, sums it up - if your life is a complete cluster thingy then it must be someone else's fault because me and my .38 Smith and Wesson are awesome.

I've been watching right-wing extremists for twenty years, and it really does feel like it's getting worse. The last couple of years, I've seen more and more of them appearing in ever more random forums. It used to be that the clash of ideologies happened only where people were talking politics. Now, it's not so much.

This evening, I had one systematically go through my posts on Reddit and answer them with variations on a theme of this: http://gyazo.com/6c944769846e0044a20e... (Bad language warning). Mind you, there was some contributory negligence involved. I can't say that I wasn't trolling him shortly before he lost his temper and spent the next hour doing the above. We disagreed on whether or not the Holocaust had occurred, for context, and it went downhill from there.

The rest of the world is bewildered by how a small minority of right-wing ide...