Back to the Future Hoverboard and Fashions from 2015

For thirty years we have known what 2015 will look like. Marty McFly took us there in his time-traveling DeLorean. But how many items are actually available in 2015?

I was only twelve when the first 'Back to the Future' film was released. Accordingly, I grew up with certain expectations about what 2015 would be like.

My entire generation are looking forward to flying cars, and facial treatments, which instantly render us several years younger. We know that holograms will take our orders in cafes, and that children will scoot about on hoverboards. Our clothes will automatically compress to perfectly fit our forms.

So now that 2015 is rapidly approaching, how much of that promised merchandise is actually in our stores?

Where are my Flying Cars from Back to the Future?

Everyone has been waiting for this for thirty years!

For most of my life, it's been a point of fevered anticipation. I can remember being at a New Year party in 1999, cheering as the century launched anew into 2000. Someone called out, "Just fifteen years until the flying cars!" And a ripple of excitement passed through the crowd, like a Mexican wave of cheesy grins.

We knew it would happen. We'd all watched the Back to the Future series at very impressionable ages.

The countdown has continued in earnest since then.  Ten years, five years, science, what's keeping you?! Four years, three... Now 2015 is practically upon us and I don't see any flying cars in my sky.

So what else had we been led to expect would be upon us now?  Let's refresh our memories here with Marty McFly's arrival into his future.

This is what Hill Valley should look on October 21st 2015. Just your average US town in the 21st century...

No listing for this movie on IMDb...

According to Back to the Future, the headlining movie release of October 2015 was Jaws 19. Yet the reality has thwarted us.

No studio has picked up the rights to this classic. It's not been written, cast nor recorded on any film-set that I can see. More to the point, where were Jaws 6 thru to 18?

Even with the best will in the world, we can only force our way to five Jaws movies, before even the rip-offs gave up on the franchise.

That's being generous enough to throw in the Italian mockbuster Cruel Jaws, which was made and marketed in Europe as Jaws 5. It's not generally considered part of the official franchise.

On the bright side, none of us have had to sit through twelve terrible movies. Jaws was a classic. Jaws 2 less so. While Jaws 3 is universally derided as one of the worst films ever made; and I don't personally know anyone who saw past that.

Imagine how bad Jaws 19 could have been?! Frankly I think we dodged a bullet on this one. Though I am disappointed that we didn't equally get the holographic marketing outside of our theaters.

We Got the Hoverboard from Back to the Future II!!

In fact, we got it twice, not including all of the little statues and plastic figurines. Only the BotF hoverboard isn't quite as advertized in the movie.

There it is!  Every detail an exact replica of the hoverboard in Back to the Future II.

We knew this was coming. We'd glimpsed the real (and present) future in those multi-colored zig-zags patterns. By 2015, we knew that our children would be zooming along at speed, on something that looked like it was designed by someone with a migraine.

This electronic MunkyBoards device carries a 250 watt motor. Hitting speeds of 14mph, it runs for 10 miles without needing another charge. Then it's rechargeable via USB. Nor does it run over water.

Ok, so the hefty price-tag makes us wonder how rich the families of those Hill Valley spoiled brats really were, but nevertheless, it's practically the real McCoy.

Until you turn it over and realize that the devil is in the detail. This isn't a hoverboard. It's a cunning disguised electric skateboard.  It has wheels! This isn't the future as glimpsed by Marty McFly. It's merely merchandise inspired by the movies. *sigh*

So did nobody actually give us a proper hoverboard?  Yes! Yes, they did! Enter Mattel with a genuine, floating on the air kiddie craft for 2015!

A full-sized perfect replica of that which we saw Marty demonstrating, it also makes the appropriate whooshing noises. Absolutely perfectly detailed in every way, including the correct stickers as per the movie.

There's always a but, isn't there?  And in this case the issue is weight. The hoverboard does indeed hover. It can even glide over certain surfaces. But not with anything actually placed on top of it.

In short, there is no way that you can escape the local bullies by hovering around the central square. You couldn't even meander around on it with your homies, as any self-respecting child should be by 2015.

It's for putting in a display cabinet, or posing with for photographs only. Disappointing.

Marty McFly's Hat and Coat from Back to the Future II

In order to subtly blend into 2015, Marty had to dress just like the rest of us. As the height of modern fashion, no-one would blink seeing a youth in this outfit, would we?

To be fair, this wasn't too far out. I mean, I can see anyone passing muster today in those jeans and t-shirt. The jacket is unusual, but not too way out. I might look twice, though I'd not assume that I was eye-balling a time traveler. And I've definitely seen head-wear in those colors at the Glastonbury Festival.

Nevertheless, if we want to start a fashion revolution, in order to avoid some kind of paradox when Marty arrives, then we have the time and opportunity right now. The jacket and psychedelic baseball cap do exist.

Marty McFly's jacket from Back to the Future II did have some features that ours does not. It doesn't alter its own tailoring to fit our body for a start. Nor does it self dry, after being dunked into an ornamental pond.

I can't help feeling that 2015 is somewhat lacking from what we'd been led to believe. But the hat is exactly as advertised. Yay!

There's a huge silver lining in Back to the Future getting 2015 fashions so wrong. We're not all running around dressed like this:

Ok, it's still only 2014. There's time yet for everything to fall in place, but not much. Come on, science!

There's been a tendency amongst those of my generation to think of Back to the Future like a documentary. These things were really going to happen to us. We were actually going to have hoverboards and flying cars by next year.

As the countdown turns to months rather than years, it appears that we were lied to. All of the items on sale are replicas inspired by the movie franchise, not everyday objects that we'd all enjoy.

Or perhaps the greatest coincidence occurred to trick everyone involved, including the theater-going public. Marty McFly arrived in the middle of a Back to the Future fan convention in 2015. That square was a replica based on the movie. Those people milling around were all cosplayers.

Now that's a paradox worthy of the fourth in the series. Time to script and film it, Mr Zemeckis!

Back to the Future II Official Trailer

Lots of glimpses of 2015 in this. Perhaps we're just in an alternate dimension or something?

More Back to the Future II 2015 Merchandise

It surely says that you want to BUY ME A HOVERBOARD, as a token of our long-lasting friendship and your on-going esteem. Doesn't it? Surely? Say YES! :D And did you find the Scottish history and politics articles?

And finally - yes, despite all our conversations on Scottish History and politics, the post I come on here and read is one about flying skateboards. I'm sure this says something :)

Also - isn't Jaws 4 the one with Michael Caine in it? (goes to check) Yes, apparently he was noimated for a Razzie, along with most of the cast.

But there ARE hoverboards, sort of: http://chicos.laprensa.hn/wp-content/...
(not sure if that link will work).
Is it cheating if it uses water rather than whatever the original used? If hoverboards existed in real life, you'd probably need to have a licence and take a test to use one. And pay tax. And they'd be kind of rubbish, because people like me would fall off them.

I should imagine that such things would be out of the price range of your average house burglar. I was more worried about abuses by people wearing uniforms, or worse, those in suits.

I 'do' Christmas, and Winter Solstice as well. My family are all various hues of Christian, so that's where the party is. :D

I must say! It was presumptuous of me to presume you 'do' Christmas? Jo

The thing is it can be used by criminals too?
Just one more layer of complexity to live with? Jo

In so many ways, that's quite clever in a siege situation, or any other emergency one. Though my cynical mind has already worked out ways in which this could be abused by the authorities. It's an interesting ethical debate though, isn't it?

Happy Christmas to you too and a wonderful New Year. :)

They used a robot to cut through the wall and flying drones to take cameras in to see what was happening. The bathroom window was open. This is near the Uni where I teach sometimes.
I think there will be fling cars - they have robot operated cars that are safer than human driven.
So much of the world is like "Beam me up Scotty" now
Happy Christmas anyway Jo and prosperous New year, Jo 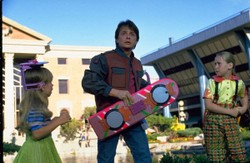