In what kind of environment do you work best? Do you need complete silence to be able to concentrate or does the hum of the hive push you to be a busy bee?

I think a lot about work space - distractions, intrusions, configurations, clutter. A lot of these kinds of things we can control. We can move furniture around, paint walls, create a cleaning schedule to declutter. But some things lie beyond our control - either we share our work space with people who don't see things in the same way that we do, or there are extraneous factors that affect our space with no room for compromise or argument.

I'm particularly inspired to write this piece because I live and work in China, and one of my top five words to describe any and every place I've ever been to or lived and worked in China is NOISY. You just can't escape it. It is extremely difficult to find or create a work space conducive to calm and productivity.

But you don't have to live in China to have to deal with various noisy intrusions while you work. And for those fortunate enough to have a manageable work situation, sometimes it's worth thinking about the background you deliberately set up for yourself and how it affects your productivity.

Music to My Ears?

There is even an academic journal called "The Psychology of Music". And other journals devoted to the study of work devote space to the effects of music and noise on employees. It is serious business.

Are results of these studies conclusive? Like with all research, very specific variables are studied under very specific conditions. You might find that studies contradict each other when they appear to be examining the same thing, but in reality, some small difference in the study conditions will change the outcome.

Although I have a research background myself, I am hesitant to let research findings completely drive workplace policy. If you are a manager wondering what to do, it's probably best to set up reasonable outcome measures, give your employees flexibility in how they carry out their work, and then let the successful reaching of goals determine the employees' status.

If you are making choices for yourself in your workspace, it is probably best to consider what feels best for you. If music works for you (and you should be able to tell whether you are meeting deadlines), wear ear buds or headphones. If you don't want to listen to others' music, consider getting yourself a pair of noise cancelling headphones (see below).

Unlike a slow-moving hybrid car, people are noisy. Some people breathe loudly. Some have audible habits like mumbling to themselves, or sniffing incessantly instead of blowing their noses when they have a cold, or constant throat-clearing. And these come to the work place with them. Unnoticeable to the person carrying out the habit, others around him or her are often well aware.

There are also those folks who just dominate a space with their big personalities and lack of consideration. Loud telephone conversations or carrying out heated or animated discussions near the desk of someone who is trying to work instead of going somewhere else, can be common problems in shared space.

For those working on their own, people noise can still intrude from nearby offices or from outside a window.

If you've mastered the art of diplomacy, sometimes you can do something about it. It is probably easiest to politely ask others to carry out conversations elsewhere. Annoying habits are much more difficult to change, so consider carefully whether talking to the infringing individual will do more harm than good.

One thing to avoid is being passive-aggressive. You know how this goes - someone is annoying you, so instead of dealing directly with it, you try to do something to annoy the person back. Often it backfires, but it is also immature and makes you look bad.

There is always a trusty set of noise-cancelling headphones or playing some light music using ear buds if changing the intrusive behaviour is not possible.

Do you work downtown where there is a lot of traffic or random street noise? How about renovations that just started in the office next to you?

Sometimes, there is absolutely nothing you can do about noise like this. Hopefully, the environmental noise is short term, and you can either try headphones, or, if your boss is flexible, ask to work from home temporarily or change your work hours slightly. In situations where your work location seems permanently noisy, it might be time to sit down with yourself and decide whether you can put up with the situation in the long run.

Dealing with Stress at Work

Most of us spend more time working than doing anything else, so it is important to make your environment as healthy and stress-free as possible. Stress affects every area of our lives, and even low-grade, long-term stress can affect us in ways we don't yet understand.

If you have a stressful work environment and can't see any way to change things or to change jobs, try to counterbalance with some healthy activities.

As I mentioned above, living in China is a noisy business. There are just cultural differences in the idea of privacy and noise pollution. Things that I consider to be unhealthy and stressful are considered business as usual. As a result, the choice to be in China for any length of time is a major decision and requires a lot of creativity in trying to get around noise problems.

Just to give you a taste of what living and working in China involves (and this is just the noise aspect of things):

I live in staff housing on a college campus. Most of my work is done in my apartment, so my living space is essentially also my work space. I contend with the following:

The staff housing sits on the edge of a truly massive construction zone, and it is in operation 24 hours a day. It might be hard to imagine, but throughout China, construction is a constant. Half the projects seem to end up abandoned part way through, but when the developer is serious, they go through the night seven days a week.

The college broadcasts student radio from loudspeakers posted around the campus. No one has a radio, so there is no option for tuning in. There is a loudspeaker just outside the staff housing, so when broadcasts are made (three times a day - noon, dinner, and around 9 pm), it is so loud  that I can't have a telephone conversation inside my apartment or hear the sound from anything playing on my computer.

Despite not being a military college, there is a loud trumpet call played at 6 am and 10 pm every day. Again, the loudspeaker is right outside my building, so I definitely hear it.

The school keeps a construction garbage dump just below my second floor window. There is frequent dumping and loading of bricks, metal, gravel, and various assorted materials.

We have low-flying helicopters pass by more frequently than I would guess necessary. I think there is a military school or base somewhere in the area. It could be training. I hope they don't crash on or around us.

It wouldn't be China without firecrackers. They can be set at any time of day or night for reasons I still don't truly understand. It was much worse in the small town I worked in a few years ago (I'm on the outskirts of a city now). In the former, firecrackers seemed to go off for several minutes at a time almost every day, at any time of day or night. Nobody was able to tell me why except that people were just 'happy'. I know when new stores opened, they'd be set off, but there couldn't have been that many new openings.

There isn't really anything I can do about changing these things. I've had to accept that I made the choice to come to China (again), and that being here means I have to put up with a lot of nonsense. I do try to work around certain things - like not scheduling phone calls when the student radio is on. And I have trusty headphones with music - although not all work goes well with music, I find. I will be relocating once my semester is finished :)

This is something I would LOVE to understand. Is it personality differences? Differences in how our brains process information? The effects of some event that occurred early in life to one person, but not another? Likely a combination.

For myself, thinking back to the endless homework I had in high school, I could handle music when I did math or language homework, but other types of work were just undoable with it. And now, spending a lot of time writing, whether I can handle music really depends on the type of writing I'm doing. Hmmmm.

This is very interesting. One of my daughters can't concentrate on her homework or a project for school if there is a lot of background noise, the other, my oldest enjoys listening to music while she studies or reads. I often wonder how she can read and listen to pop music... classical without lyrics maybe but POP, I don't get it This is a very interesting topic, you've got me thinking now..,

Alignment of thoughts with focus and goals gives greater chances than any app... 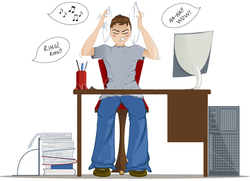 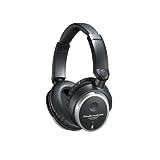 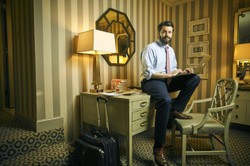 Alignment of thoughts with focus and goals gives greater chances than any app of boosting productivity for financial success and personal development.
Loading ...
Error!