Troubled soul and master escapist, Henri de Toulouse-Lautrec, found the honesty of humanity through his painting.

I've never been so happy to see a group of hookers and dancers as when I received a group of six classic Toulouse-Lautrec posters for my birthday as a young person. I fell in love with brash colour, with dancing redheads, and with capturing human honesty with a paint brush.

Those posters, all six, adorned my walls for years. While I enjoy many different styles of art, it was these posters that would catch my attention when I entered my room time and again. Instead of them fading into the background as things do when they remain unchanged for so long, these works held the power to captivate me many times over the years.

Does one need to suffer in order to empathize with or see through the layers of another person? Not necessarily, but it helps. Although aristocratic by birth, male, and no stranger to privilege, Henri suffered from a genetic bone disease that stunted his leg growth and left him a physical outcast. It was the source for both his brilliance and his ultimate demise.

Artistically inclined, Henri might not have seen people in quite the same way had he not been through much himself. He learned early on, perhaps, that outward appearances lead to misunderstanding, and if you bother to strip that all away, there is pure humanity. He supported Oscar Wilde during his tribulations. He painted what he painted despite ridicule from the artistic community. He often chose prostitutes as his 'models', painting them, not as the playthings of men, but as people, through tender, but unsentimental portrayals of average women doing average things.

He immersed himself, not just in paint, but also in alcohol and unprotected sex - the other side to his coping with lifelong disease. While his search for escape led to a highly productive and remembered career, it was also responsible for his death at the age of 36.

Toulouse-Lautrec, living as he did in Montmartre, was commissioned to do a series of posters for the 1889 opening of the Moulin Rouge, a famous cabaret still open today.

He painted the crowds and the dancers. He is thought to have painted objectively, painting people honestly and stripped of glamour.

The posters I initially became familiar with were from this series, and featured some of the more famous dancers, such as La Goulue, and Jane Avril.

The Six that Lived with Me

Although quite well known for his cabaret posters, Henri produced a great deal of work on the daily life of the subjects he liked best. Unposed, the women were generally free to carry on with their daily tasks as Henri observed and worked. He was unique in his lack of judgment at a time when there was widespread underground participation in pleasures of the flesh, but public disdain of female sexuality and provided services. Henri was drawn to inner sadness, hardship in life, and the realities of the other half (referring to both the poor and women). He painted the life he lived, and the people he loved. 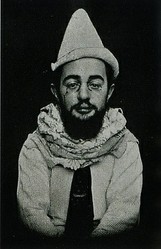