Looking for Battleships LEGO but drawing a blank? Here's my run down of the newly released construction sets for the Battleship movie.

It's only natural that the minute your kid gets home after watching the new Battleship movie, he will want to make his own ships. But if you are searching for 'Battleships LEGO' you will most likely draw a blank. And here's why - because the construction sets you've seen on TV are not made by LEGO, they're from Hasbro - the owners of the Battleship brand.

If you are based in the UK, may I gently nudge you towards this guide to Battleship toys in the UK.

How ridiculously cool does this toy look?

In 2011, Hasbro launched their own version of the little plastic construction block - Kre-O. They started off with a Transformers Kre-O line, and have now extended it to include characters and ships from their 2012 movie Battleship.

The bricks look just like LEGO and are supposed to be fully compatible.

The sets also come with mini-action figures called Kreons, that look like LEGO minifigures, but have a smoother, more curved styling to them.

There are currently 5 sets in the line up, outlined below.

This is the most complex set in the range with more than 500 pieces, and is suitable for older children, from ages 8 years and up.

The set includes 6 customizable missile launchers and opens up to reveal 3 levels.

It also comes with 5 Kreon figures.

You should expect to pay around $85 for this set.

With 277 pieces, this is an easier set to construct and is suitable for kids aged 7 years and over.

The set consists of an alien craft armed with alien-technology weapons, and a little Navy scout boat, plus 5 Kreon minifigures.

This set is priced around $40.

Also suitable for kids aged 7 years and up, and priced at around $25.

177 pieces go into constructing this battle helicopter with rotating blades and 2 missile launchers.

Set includes two Kreon figures - a pilot and an alien.

For ages 6 years and up.

Build your own firing weapons.

66 pieces go into building  a Navy scuba boat and some underwater greenery.

Also includes 2 Kreon figures (a hero and an alien).

Suitable for kids aged 6 years and up.

These are such a new toy that there aren't many reviews around.

The USS Missouri and Alien Strike sets have received an average of 4.5 stars out of a possible 5 from dozens of customer reviews left on Amazon.

I've also found this video review of the Combat Chopper set. This isn't just a regular parent's toy review. The guy who runs this YouTube channel is a real LEGO nut and knows everything there is to know about construction brick based toys. He even goes into detail about the quality of the stickers that come with the set.

Hands on review of Combat Chopper

When you want a challenge try building one of the most complicated Lego sets. 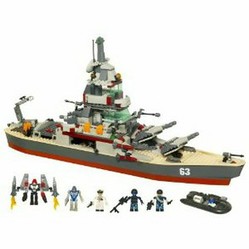 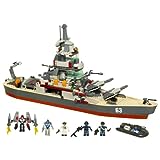 It's hard to believe, but in all their 80 year history, LEGO has never put out sets that were directed exclusively at girls. LEGO Friends finally rectify this injustice.
69%  6   7 spirituality
Lego 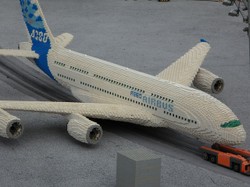 When you want a challenge try building one of the most complicated Lego sets.
Loading ...
Error!