Already in her lifetime, some of Beatrix Potters most popular story characters were made into figurines and other collectibles.

Beatrix Potter stories were my favorite childhood stories, I especially loved the drawings. even as a frown up I still find her artwork as appealing as ever.

Over 100 years after she published her first book "The Tale of Peter Rabbit ", Her characters still seem to have a timeless appeal that has never really waned in all that time. People both young and old find them cute, yet they are not overly cutesy, showing a lot of realistic detail.

When looking at Beatrix Potter Figurines, you will notice that there both more vintage figurines as well as more modern renditions.

Despite the anthropomorphism of her charterers, she somehow still manged to retain each animals basic personalty.

On the vintage side have the ceramic figurines made by Beswick and Royal Albert - These were and still are high quality ceramic characters, many personal overseen by Potter.

More recent companies such as Border Fine Arts and others seem to prefer making the figurines out of resin - These tend to have finer details then their ceramic equivalents, but lack the glossy look, they also tend to be a lot less expensive.

I personally like them both - but it is easier to get the resin figurines these days.

From The Tale of Peter Rabbit and The Tale of the Flopsy Bunnies -- Peter Rabbit is by far the most well known of Beatrix Potter's characters. This story was her first and was developed from a series of illustrated letters to her former governess's children.

This figurine is about 3 inch in height, is made from resin, with nice details and good color.

It is hard to believe that The Tale of Peter Rabbit, her best most popular story was first rejected by six publishers before she self published it herself in 1901. On the strength of her self published book, Frederick Warne & Co published it the next year (1902)) using her original prose and using the then new Hentschel three-color process to reproduce her original watercolors.

The Tale of Peter Rabbit

and other books with Peter Rabbit

The naughty rabbit can't seem to keep out of mischief, there are so many scenes with him as the main character, both from the stories and from pictures made by Beatrix Potter for Cards during her lifetime.

Ultimately there were a total of three books in which Peter rabbit was one of the main characters, these include:

Peter Rabbit also appears in other stories, including:

The books with Peter Rabbit

Figurines were not the only merchandise that was created. As early as 1903 there was a Peter Rabbit doll, after the second book she also included textiles with Benjamin Rabbit on them,

Also from the beginning there were many cards and postage stamps. Some other common merchandise are children's dinnerware, puzzles and other toys.

Because the characters were so popular with kids, using them for soft furnishing has also been very common, with prints on curtains and other textiles.

Apart from the Peter Rabbit, there were other characters that became popular. Some of the first were from his family - His mother - Mrs. Rabbit, cousin - Benjamin Bunny, sisters, etc.

We get to see Mrs Rabbit in The three main Peter Rabbit books.

Mrs Rabbit is the mother of  Peter Rabbit and his three sisters (Flopsy, Mopsy and Cotton-tail).

She is a busy and warm mother who gives good advice to her son, which is not always taken. She is also a widow, her husband met with an accident and ended up cooked in one of  Mrs. McGregor's pies.

This resin figurine is about 2.5 inches tall - It depicts a scene from the first book, it shows Mrs Rabbit looking after a sick Peter Rabbit.

These are great for decorating a kids room

Benjamin Bunny is a happy go lucky rabbit, who even while raiding Mr. McGregor's garden takes his time like nothing could happen. He makes Peter Rabbit really nervous in The Tale of Benjamin Bunny. He seems to be younger the Peter, and is called little Benjamin Rabbit in the first two stories.

This resin figurine is about 3 inches tall and comes from the original cover of The Tale of Benjamin Bunny. We see him here with the red pocket-handkerchief in one hand, an onion in the other and a very large Tam o' Shanter on his head.

There are a lot more popular characters from Beatrix Potters books. As one would expect most of these correlate to some of the other popular books Potter wrote. From rabbits, she went no to write stories with  mice, squirrels, hedgehogs, ducks, frogs, foxes and many more.

Some of the character include:

Do you like the Vintage figurines more then the more modern resin ones?

I actually like them both, but must admit that the detailing possible in resin figurines gives it a smidgen more favor in my eyes.

If you prefer to go for some of the vintage ceramic Beatrix Potter Series figurines from Beswick and Royal Albert, you can sometimes find them in an antiques shop, online your best bet is to get them from places like eBay.

There seems to be an active market for these collectibles, and they seem to have a good resale value too.

Peter Rabbit or Another

Which of Beatrix Potter's characters do you like best?

Would you buy Beatrix Potter Merchandise for someone or yourself?

I love these gorgeous Beatrix collectibles, they are awesome. It reminds me of bunny rabbits and their tales.

&ologsinquito - Do you still have all those books and the dish set - how do they compare with the newer editions they have now.

After fading a bit in popularity, they seem to have really picked up, especially after the 110th anniversary.

They are very cute. My grandmother used to buy little Beatrix Potter books for my children, when they were young. My great aunt, God rest her soul, also gave my daughter a Beatrix Potter dish set when she was born. 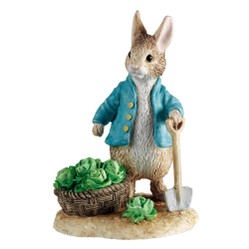 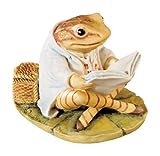