What is Marcasite Stone/Rock Jewelry?

Marcasite(pronounced: MARK-ah-seet) is most commonly used colloquially to refer to jewelry made from fool's gold, or iron pyrite.

It is a golden-colored mineral that looks similar to gold, hence its common name "fools gold". In fact it is often found in veins with trace gold deposits mixed along with quartz.. Sometimes one can retrieve gold from these deposits, but the thicker, and cruder golde lines are more often iron pyrite, then the more precious and valuable metal.

So What is Marcasite Jewelry?

How did it come about that we call the jewelry 'Marcasite'?

The name comes from the Arabic name for the general name for pyrite (Markaschatsa). Somehow we have got stuck with this corruption of the Arabic name which does cause some confusion, especially since there actually is a mineral called marcasite that is so similar to pyrite, while this may by confusing, the reason is that until about 1845 they were classed under the same name scientifically.

The name comes from the Arabic name for the general name for pyrite (Markaschatsa). Somehow we have got stuck with this corruption of the Arabic name which does cause some confusion, especially since there actually is a mineral called marcasite that is so similar to pyrite, while this may by confusing, the reason is that until about 1845 they were classed under the same name scientifically.

Marcasite jewelry is made from small faceted pieces of pyrite, or iron pyrite, usually set in sterling silver. So when it comes to marcasite jewelry and pyrite is used as a gemstone, it is referred to as "marcasite".

While Marcasite jewelry has been around since ancient times, they jumped in popularity in 17th Century France when Louis XIV decreed only he should wear diamonds. Again particularity spiked in the early 18th Century, the Victorian Era and World War I through the Art Nouveau period and in particular in Art Deco jewelry.

It was often used as a replacement for diamond jewelry because it was cheaper, especially in those times of either economic difficulty or as in Victorian times where there were more people enjoying a more middle class affluence then in previous times.

One of the great things about marcasite, is how well it accentuates other gemstones. I especially like how opal and turquoise go with it, but close favorites are garnets, rubies and aquamarines.

Good Jewelry is easy to find as the is a good selection of both factory and handcrafted marcasite jewelry that are elegant, well crafted and sophisticated and yet still very affordable.

It is important to get marcasite jewelry
where the pyrite is actual set into the silver.
Cheaper costume jewelry is made by
gluing pieces of pyrite,
rather than setting it into the silver
causing the and the pieces often fall off. 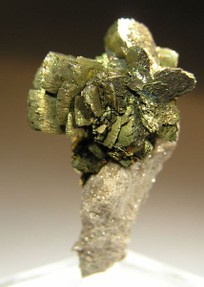 The actual mineral named marcasite (white iron pyrite), though also an iron sulfide has an orthorhombic crystal structure and is pale yellow to almost white or gunmetal gray color and has a bright metallic luster.

The color easily tarnishes to a yellowish or brownish color and gives a black streak when exposed to the atmosphere. Its almost spear like crystal structure makes it brittle, fragile and crumbly and therefore unsuitable for jewelry making.

Marcasite reacts more readily than pyrite under conditions of high humidity, forming a white powder. This deterioration is called "pyrite decay". Keeping the stone under low humidity (less than 60%) storage conditions prevents or slows the reaction.

Though not used for jewelry, marcasite can have some wonderful formations that can be very interesting. This makes it a popular stone for rock collectors.

Marcasite is polymorphic to pyrite, thus has the same composition, but a different crystal system. Above 400 ° C, marcasite transforms to pyrite.

When used as a gemstone is termed "marcasite" 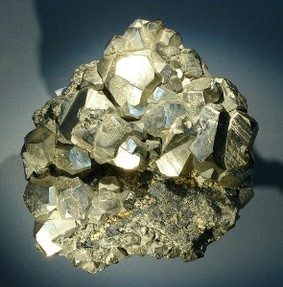 The name pyrite is derived from the Greek word  πυρίτης (puritēs). In Rome this was the general name of a few stones that caused a spark when struck against steel.

Chemically, it is the cubic modification of iron disulfide with a chemical composition FeS 2, and thus consists of iron and sulfur in the ratio of 1 to 2.

It's more cubic structure makes it more stable and easy to cut, thus it is the gemstone used to add to jewelry pieces creating marcasite jewelry.

Due to its metallic luster and its golden color it was often confused with gold. Unlike genuine gold it is not easily moldable, pyrite is substantially harder than the noble metal.

With a Mohs hardness of 6 to 6.5 Pyrite is one of the hardest minerals of similar minerals and can barely be scratched with a steel file.

Interestingly enough, many a pyrite vein will also contain traces of gold, but not usually in quantities enough to make mining the gold commercially viable.

In marcasite jewelry, the pyrites are usually cut to look like diamonds and is used often in combination with other gems and metals like silver and are then set into elaborate designs. The contrast between the two metallic shades of gray, creates a combination that is stunning with a dramatic vintage look.

Most common designs are geometric, filigree or paisley. Though maybe more traditional, marcasite jewelry tends towards the bold and dramatic without being overwhelming. Often pieces have a tarnished look, which adds even more of their special appeal.

As you can see there is a big difference in formation of the crystals of the marcasite and pyrite stones. Marcasite crystals have a flaky look, while pyrithe format

Pyrite on the other hand has crystals that are more cube-like and have a metallic luster and pale-to-normal, brass-yellow hue, sometimes with a greenish tint or a multi-colo

As early as the Stone Age marcasite as well as pyrite have been used to ignite fire. However, marcasite is more suitable than pyrite due to its massive structure to do so.red tarnish as a result of oxidation.

+cmoneyspinner Thanks for sharing. It was "fools gold",, and it did sometimes fool inexperienced miners.

At least it has some value, even if not quite the same value per unit as real gold.

Very interesting. So this is "fools gold". Will share this. 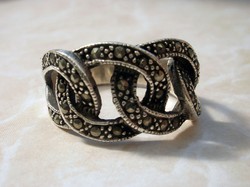 Understanding a little about jade colors and jade origin and deep traditional past gives you a greater appreciation for the true beauty of Jade.
Loading ...
Error!