Steve Rogerson reports from the 2016 Belgian Beer Weekend in Brussels, a festival that offers more than just the beer with pomp and ceremony, strange costumes and an extremely friendly atmosphere. Visitors from all around the world attended to discover just what it is that is special about Belgian beer.

Three years have passed since my first and, until now, only visit to the Belgian Beer Weekend, the annual celebration of all that’s good with Belgian beer, and there is a lot that is good. However, the shadow over this year’s event was the terrorists attacks in Brussels in March. The practical face of this were armed soldiers in the streets and increased security as people entered the Grand Place where the festival took place.

Also for this year, it meant that the festival had to be shrunk to just the stalls in Grand Place; the annexe known as Beer Street was cancelled.

Perhaps a more long-lasting effect is the impact this has had on Belgian beer trade. Tourism to Brussels is down around forty to fifty per cent on last year, which has led to a predictable hit on beer sales. There are understandable fears that some of the city’s bars and restaurants won’t survive the year.

One element of the beer festival – which ran from 2 to 4 September 2016 and is now in its 18th year – that is still with us is the march up to the Saint Michael & Gudula Cathedral so a barrel of beer can be blessed. Beer and religion are intrinsically linked in Belgium with some of the country’s best beer brewed by monks.

The pomp and ceremony of the festival were there for all to see not just through the parade to the cathedral but in the ceremony afterwards at the Town Hall overlooking the Grand Place where new members were inaugurated into the Knighthood of the Brewers Mash.

Here Frank Boon from the brewery of the same name addressed the gathering on the thorny subject of craft beer.

“Six years ago, the name craft beer arrived in Belgium from the USA where everyone had been drinking commodity beers,” he said. “Those who wanted speciality beers relied on imports, many of them from Belgium. Craft beer is a movement, a reaction against the US market. Some of the US craft breweries are two hundred times the size of Belgian breweries. But size does not matter. It is quality that counts.”

Jean-Louis Van de Perre, chairman of Belgian Brewers, added that still sixty-five per cent of Belgian beer was exported but he also had a word for the growing anti-beer health lobby.

“Beer is made from natural ingredients,” he said. “It can form part of a healthy, balanced lifestyle when consumed in moderation.”

Moderation for this weekend though was not the order of the day as the 36 beer stalls hosting 44 breweries provided a selection of more than 400 beers. Beer was paid for using tokens of which nine could be bought for €10. Beer cost between two and four tokens for a 25cl glass, and the glass did match the beer; another token system ensured that everyone was served in a suitable glass.

While drinking, the punters were entertained by bands wandering around the drinking area along with people in traditional brewers garb, some drinking from outlandishly large glasses. Around the edge of the festival area on the Saturday and Sunday afternoon, brewery vehicles – some horse drawn – circled the festival goers.

But the big question everyone asks was which was the best beer. Well, I only sampled 43 of the hundreds on offer, and I tried to prioritise beers I had not had before, though I did sample the excellent Goliath Triple, which I named as my best beer in 2013. This year, though, second place goes to the rich dark Bon Secours Brune from Brasserie Caulier but the winner is the gorgeous Val-Dieu Grand Cru.

Interesting. It is good that it does not compete with Oktoberfest in Bavaria, since both could attract some of the same visitors.

http://agalma-padaw0ne.tumblr.com/pos...
A counter point of view.

The Belgian Beer Weekend in early September 2013 had nearly 400 beers on offe... 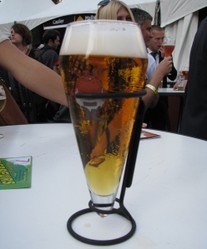 The Belgian Beer Weekend in early September 2013 had nearly 400 beers on offer. Steve Rogerson travelled over to find which was best.
Loading ...
Error!