Women who wear a burqa, however it is spelt, are anonymous. They cannot be recognised and are, therefore, beyond the law of free democratioc western countries

A Legal Case that Failed

A woman was pulled over by a policeman for not displaying her P plates in Sydney last year, Unbeknown to her the officer's video recorded her rage and accusation of racial prejudice when she was asked politely to remove her burqa.

She subsequently reported the incident claiming the officer ripped off the garment and used racial slurs against her. The evidence on the video shows otherwise. "A magistrate subsequently found her guilty of making a deliberately false statement and sentenced her to jail for six months. Ms Matthews appealed, saying there was no proof she was the person in the burqa making the atatement and Judge Clive Jeffreys in the District Court yesterday upheld her appeal." (Herald Sun June 28th, 2011

She did not show her face when questioned at the time and when the matter was in court on June 21st. 2011, the judge dismissed the claim against her on the grounds that she could not be identified as either the driver of the vehicle or the one making the claim against the officer. She got off to the dismay and disgust of the majority of Australians,

It's not in the Qoran

Long before the Muslim religion got started it was customary for women to cover their bodies when outside. This was because it was thought that the sun would place a baby in their womb and they would become pregnant. It is not so far fetched when you think about it.

Women are fair game for male advances and in ancient times, prior to the knowledge of how women got pregnant, they were mated by any man who came along. It was custiomary for the host to give a women to a male guest for the night. This is known in anthropology studies of tribal practices in Africa and elsewhere.

The only way a woman could escape male attention was to cover herself completely and hide her attractive side from view. This same thing was practiced in Western societies where we see that even in the 18th Century it was immoral for a woman to display even her ankles, let along her head, breasts or other parts of her anatomy, Even the hands were covered in gloves.

Cultural practices in Europe saw women wear with the equivalent of a head veil, long dresses and shawls. Catholic nuns still wear the modified berqa as a uniform because the custom passed down from Islam to Judaism and Christianity. Only when we study the tribal people of distant lands, such as the American Indians and the Australian Aborigines, as examples, do we find people who took pride in being naked or near so.

Should Burqas be allowed in Western Societies?

Do You Feel Threatened by the burqa?

No, I think it is good they have the freedom to wear them

Absolutely. I would support a law that a police officer could legally request the burqa be removed for a brief time for identification purposes, however, just so that the "you can't prove it was me" defense cannot be used as your first example used it.

At this time when the entire world is in flux, when the Universe is evolving so quickly that we are all in a spin, both figuratively and actually it is well worth remembering that all of us are ONE. That we all have some sort of axe to grind. I cannot comment on the case mentioned but I would say this. Try wearing a Burkha for a week, every day and all day. If you are a man try wearing a VERY DARK pair of Sunglasses, big ones. After a while one becomes used to the wearing. One finds a wall behind which to hide from the world. I had a Muslim friend who had a friend whose husband insisted she wear a Burkha. The friend said that she became so used to it and so reliant on it that she could not face anyone without it. I went to dinner with my friend and the lady was there. She couldn't speak to me until she had donned the Burkha. (I asked about it whilst she was in the bedroom putting it on.) After that she became "normal." So do not condemn the wearing condemn the control that the wearing has come to symbolise. Every religion and every culture has its own methods of control. All of us are subject to that control.

We create what we think so try to think not of others but of ourselves, our own actions. The Christian Bible states in Luke 6:42. "...cast out first the beam out of thine own eye, and then shalt thou see clearly to pull out the mote that is in thy brother's eye." (I am not a Christian _ got that from the Web ~ my Library! (:-))

I don't feel threatened by burqas. However, it is clear that like certain hoods they do disguise the person wearing them and women wearing them should be aware of the social effects of this. And I do feel police officers should have the right to demand people take the burqa off.

Yes, you don't know who is behind it

I've gone with yes. I wouldn't exactly say I feel threatened by the Burqa but my children certainly do and I can see why. But I'd prefer that women came to their own decision not to wear a Burqa than it being enforced by law.

Although I defend their right to wear what they like, assuming it is their choice of course. I do wonder about anyone choosing to cover the face because from a social psychological perspective it symbolises a desire to conceal feelings and the subtlies of social communication given through facial movement. Instead of getting aerated about the issue I would simply ask the wearer how they believe it conducive to good social relations. I'd be very interested to hear their rationalizations.

I agree with Spirituality. Freedom of religious expression is not protected in the United States when the state has a compelling interest that overrides some types of expression that could endanger others. I would want to know how these women are treated by the TSA when they want to fly. If they won't remove a head covering that covers the face, how thoroughly are they allowed to be searched? They should be subject to the same laws as others when they are asked to identify themselves by officers, for TSA searches, and for official pictures for Drivers License or Passports.

Islam began in the 7th century AD. Prior to that there were many educated civilisation, the Romans, Greeks, and Egyptians to name just three. Their women did not cover themselves head to foot, and they were quite aware how babies were created. Just look at the many phallic symbols on ancient ruins and the depiction of women with very little clothing, and where beauty was to be celebrated - there's plenty in Egypt dating back three thousand years.
Islam by the 12th century was one of the most educated and scientifically advanced cultures in the world - so your suggestion that women wear the Burka because of ancient ignorance is fundamentally flawed and controversial at best.

There is a case for cultural integration, but there is also one of freedom of expression. There is a case that some women who wear the Burka are repressed. But equally there are women who feel more comfortable wearing it because it gives them independence, free from the need to expose their sexuality in an increasing sexualised world, especially in western society. Do you wish to ban it, or do you just want the law to change to allow the face behind the veil to be revealed when questioned by authority? Incidents where veiled woman have escaped the law are generally in isolation yet receive much publicity and fuel intolerance and prejudice. Whilst I may find the burka disconcerting, I certainly don't feel threatened by it. Those who feel particularly intimidated by it may well have some personal insecurity issues of their own.

It's an inflammatory topic I agree, but it should really be put into a sensible perspective.

I had not heard about this case before, but it does make one think. I always have thought that everyone should have the right to wear whatever they see fit, but when it affects the law and other people, perhaps it should be discussed.

I think it's very important these types of wear should be judged without reference to religion. In countries where there is a duty of identification, there's a clear basis for banning them or at least making it easy to take the hood OFF in case an officer of the law demands someone identify themselves. 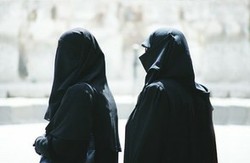