In accordance to Islamic point of view, men can also wear jewelry, however while it is permissible for them to do so, there are certain limitations as well. For instance, men may not wear gold, iron or copper jewelry for various significant reasons; the Holy Prophet (pbuh) mentioned that iron for example, was a metal that was only worn by those whose abode is Hell, and thus Muslim men have always been warned off iron made jewelry. The best kind of jewelry that can be worn by Muslim men, is made of silver. It has been cited that the Holy Prophet (pbuh) himself wore silver jewelry, and thus it is acceptable for other men to do so as well. However, a problem arises when jewelry makers may often craft or weld other jewels or stones into rings and pendants- that may not be permissible for Muslim men, and so they risk the chance of offence. Which is why, we’ve brought you a complete array of jewelry; pendants, cufflinks, rings, that we assure you has been made 101% from silver and metals that have been deemed acceptable by Islam. And while they look good, and may also remind you of many significant aspects of your religion; the crescent and moon for instance, which is a symbol of Islam, we also assure you that all of it is simple and tasteful; neither too decorative nor too flashy, which again is forbidden by Islam- but just right.

For the man who wants to be reminded of spiritual matters, even as he wants to feel good about himself, we’ve got the Sterling Silver Men’s Black Onyx Allah Ring. It comes in a beautiful subtly shiny silver shade with a black mount. This black mount in the center of the ring has been engraved with an ‘Allah’ in classic Arabic calligraphy and gives a strong, powerful effect- perfect for reminding anyone that at the same time as you care for your appearance, you always tend to remember your Creator and His endless bounties.

Another great looking piece of jewelry you should try out, would be the Sterling Silver Crescent Moon And Star Ring. In the middle of the black mount in the center of the ring is a beautiful silver moon and crescent. Both these planetary bodies as we know, symbolize Islam however it’s also a great reminder for patriotism; if you’re Pakistani, and haven’t been feeling it for a while! Get it now and cheer yourself up- both nationalistically and spiritually!

This is a another beautiful looking ring that’s different because unlike the average black mount, the center of this ring has been mounted in a subtle slate grey with a wonderfully crafted and engraved moon and star right in the center! Perfect even for office days, or when you just need something to brighten your mood!

An elegant twist on party or other special occasion cuff links would be the Muslim Stainless Steel Cuff links. They are black and white with Al ham’ du lil lah in the center in beautifully crafted black calligraph. Perfect for ensuring that an otherwise somber suit or pair of shalwar kamiz look both neat, unique and yet absolutely dazzling!

A fresh twist on a pendant necklace for your man, would be the Solid Holy Allah Bless Charm. It comes in a shiny, liquid silver with a curly design on the outside and Allah crafted on the center of the pendant- again suitable for wearing at the neck of a pair of shalwar kamiz or tucked inside your t-shirt, always reminding your of Your Lord!

A pretty, but yet manly spin on a religious pendant would be The Sterling Silver Allah Pendant. It comes with a beautiful black and white intertwined curly design with a lovely sun shaped center- on which has been mounted Allah in the center, in the nicest way.

This pendant is unique because instead of the traditional moon center, the word Allah has been mounted in the middle of a sun-shaped pendant, which looks at once refreshing and elegant and looks suitable for both day and night time.

An absolutely stunning and artistic piece of jewelry would be the Sterling Silver Mecca Kaabe Building pendant. It comes with a black twisted chain, but the real masterpiece is the immensely aesthetically pleasing sketched-looking Kaabe etched and engraved in the mount of the pendant.

It looks simply beautiful and is great for wearing even if you’re not on Hajj! In fact, the sheer simplicity and loveliness of the mount should not only remind you of your religious duties, and one of the five major pillar of Islam, but make you actually want to perform it as well!

Now you can choose and buy beautiful spiritual and religious jewelry from a w... 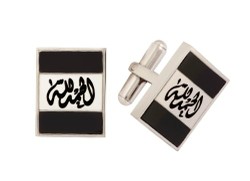 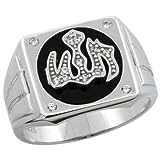 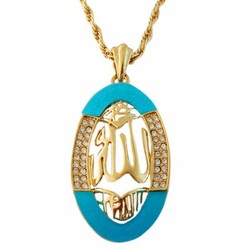