... or, at least, the actors who play them. I know that my jaw gaped, when I learned a few of these. Not to mention a certain amount of delighted cheering.

'True Blood' is the wildly successful HBO vampire show created by Alan Ball. Now into its sixth season, it's gathered plenty of awards, including an Emmy.

The main story arc centers around the often stormy relationship between vampire Bill Compton and human waitress Sookie Stackhouse. But how much do you really know about the actors in those roles?

1, Anna and Stephen are Married to Each Other in Real Life

The couple met at the audition for True Blood. When they read their lines together, the director certainly spotted chemistry enough to cast them. But that was not feigned.

A very real attraction was buzzing between Sookie and Bill, and it spilled out into real life.

By the end of the first season, they were dating. By the second, they were engaged.

Stephen Moyer and Anna Paquin married in a private ceremony in Malibu, California, on August 21st 2010. Security was so tight that even the famously invasive Hollywood press only secured a couple of highly grainy, long distance photographs.

2, They Have Four Children (Including Twins)

Stephen Moyer was already a father. Due to a previous relationship, his son Billy was born in 2000. Two years later, he had a daughter named Lilac with British journalist Lorien Haynes.

Billy lives in London with his mother, but Stephen speaks to him regularly using Skype and visits often. Lilac lives in Los Angeles. The proximity ensures that he sees even more of her.

By 2012, two years after they tied the knot, the showbiz gossip columns went into overdrive. Anna Paquin was very obviously pregnant. She received a round of applause, when she turned up at Comic Com with a large bump.

Fans of True Blood will need to look very carefully at the camera angles, during filming in season five. They were done to disguise the fact that Sookie is apparently expecting!

Anna gave birth to fraternal twins - a boy and a girl - in September 2012. There was a scare, when they were born prematurely, but both babies are doing well now.

Romantic Bill and Sookie from True Blood Season One

3, They Swopped Hair Colors for Sookie and Bill

In real life, Anna Paquin has naturally long, black hair. Stephen described it in Byronic fashion as 'raven tresses'.  She dyes it blonde in order to play Sookie Stackhouse. The waitress has that coloring in the books written by Charlaine Harris, upon which True Blood is based.

Dark-haired Bill also gets his look with the help of a bottle of hair dye.  In reality, Stephen Moyer has light brown hair. So light, in fact, that it is easily bleached blond by sunlight.

In between stints of filming True Blood, the couple revert to their natural colors. It helps keep them from being recognized in the street!

4, Neither Actor has an American South Accent

One of the things that I absolutely adore about True Blood are the accents. The show is set in Louisiana, so everyone sounds like they hail from the American South.

Bill Compton, in particular, has a syntax a little like Clark Gable in Gone with the Wind. As he well should, as he was alive during the American Civil War.

But those accents have been developed with the help of dialect coaches. In reality, Anna Paquin has a New Zealand accent. She was born in Canada, but moved there when she was four years old.

Stephen Moyer does come from the south, but not the American South. He's English. He normally speaks with a broad Essex twang! (Of every fact uncovered for this article, this was the one which floored me most of all!)

5, Stephen Moyer is a Patron of Brentwood Theatre

The actor behind Bill Compton has not forgotten his roots, despite the shift in on-camera accent.

In 2007, before True Blood was even made, Stephen Moyer was a reasonably successful actor. He'd played parts in staple British dramas, like Casualty and The Bill, before crossing the Atlantic to appear in shows like Waking the Dead.

But it had all begun for him in his local theater in Brentwood. He wanted to give something back by becoming its patron.

His work there has extended into the Stephen Moyer Kids Theatre Fund, which aims to provide the funding for child actors to follow their dreams.

Watch The Piano on DVD

When Anna Paquin's name popped up on the True Blood opening credits, those of a certain age had a double-take. We knew that name!

It had been a good few years, but who could forget THAT performance in The Piano. We all wept with her, when the child received an Academy Award for Best Supporting Actress.

Anna Paquin was only nine years old, when she accompanied her sister Katya to the film's auditions. She hadn't planned to try for the role herself, but kind of got swept up in the mood. Nor was the independently made, New Zealand movie predicted to be so BIG!

It was so good. She was so good. On a global scale, audiences talked about nothing else for weeks! I remember it happening. I bought the film in 1993!

Anna Paquin Winning an Oscar for The Piano

If it wasn't for Tatum O'Neal just scraping the accolade, Anna Paquin would have been the youngest ever Oscar winner. She was just eleven years old.

He'd been asked his opinion of Edward Cullen as a vampire. Stephen responded that Cullen was a bit of a 'pussy'. To make things worse, he added, '(Edward Cullen) is the slim-fast, diet Coke of vampires.'

The Twilight fandom (over-)reacted instantly, internationally and viciously. Not only did blogs, social media and forums fill with shrieking indignation, but Stephen still receives some pretty full on hate mail.

Naturally not actively so, now that she's married! But since when did that ever change a sexual orientation?

Anna roundly disdains anyone who claims that bisexuality is some kind of compromise, for those too scared to admit that they're gay.

She told Zooey magazine, in May 2012, "For me, it’s not really an issue because I’m someone who believes being bisexual is actually a thing. It’s not made up. It’s not a lack of decision.

It’s not being greedy or numerous other ignorant things I’ve heard at this point. For a bisexual, it’s not about gender. That’s not the deciding factor for who they’re attracted to."

Anna Paquin in the We Give a Damn Campaign

Even if Anna Paquin had taken her husband's name upon marriage, she still wouldn't be Mrs Moyer.

Stephen Moyer is a stage name. The name on his birth certificate and legal documentation is Stephen John Emery. Until he came to join the actor's union Equity, it was also the name by which he'd been billed in all those plays for LAMDA.

In Britain, professional actors have to be registered with Equity. But there was already another Stephen Emery on the books. This is why our actor scrambled about for a new moniker and came up with Moyer.

It was worth it though. His Equity card made him eligible to work for three years at the world famous Royal Shakespeare Company! 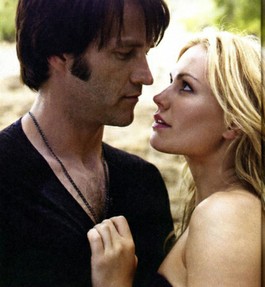 Despite the fact that Anna was, in her own words, 'the palest brunette on the planet', she turned up to audition. She convinced them that she'd look great with blonde hair and a tan!

Meanwhile Stephen Moyer wasn't nearly so enthusiastic. He'd initially turned his nose up at the concept. He wasn't really interested in paranormal stuff and vampires just made him think of Twilight. Then it was pointed out that Alan Ball was behind True Blood.

He read the script and rushed to audition. But even then wasn't at all certain he'd accept the part. He was living in London at the time, feeling depressed because he'd just been burgled. Thieves had cleared him out, even taking irreplaceable items of sentimental value, like photographs.

Plus his kids were in London. He didn't want to be an absent father, living a continent away.

What swung it were two major factors - the fact that this was an Alan Ball script; and he'd bumped into Anna Paquin at the auditions. He'd been keeping in touch with her via Skype. Even though she was in New York and he was in London, they'd still managed to meet up for a date. Things had already become quite intimate, before they were both given the roles and called back to film the first season of True Blood.

He decided to go for it. Because, you know, It would give him chance to get to know Anna better...

Sookie and Bill Scene from True Blood Season One

Stephen Moyer said in an interview that there's a reason why so many actors get together. They are the people who they meet. Day in day out, on film sets, for months on end. Being recognized in the street doesn't do wonders for your love life. But chatting with people in the same boat does.

Interesting facts. Had no idea about any of them. Being together as a couple in real life is one thing. Many actors do that (to a certain degree I would assume it could also be part of advertisement, hype, giving people a reason to chat and gossip) but having four children? ... I didn't expect that :) Entertaining read.

I think you'd really like this particular show. Have you ever watched anything by Alan Ball before? He did 'Six Feet Under' and 'American Beauty'. Very dark, but presented quite lightly. More complex than you at first suppose. It's very good.

And I'm glad that you liked the article, even though you don't know the people!

Must admit it's not my genre when it comes to viewing - but incredibly informative and well presented!

You and me both! Glad you liked it. What was your favourite fact? I'm still in shock over Bill Compton with an Essex accent!

This is one of my favorite shows. Great article, awesome facts! 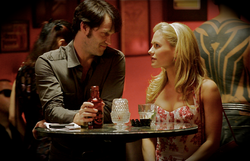 Hosting a vampire themed party to watch True Blood? There are loads of costumes and supplies to bring Bon Temps to your home.
100%  30   12 JoHarrington
Vampires