Looking for fun and interesting facts about bobcats for kids? Read on and learn all about the distinctive and mysterious bobcat.

Bobcats are found throughout North America, and occupy a place in folklore and mythology of many cultures, being clever hunters and great survivors, with a distinctive appearance resembling a wise old man.

Bobcats are a type of lynx, and share some of the same habits and features of these unusual felines. Read on to learn all about bobcats, for kids, adults, and the whole family.

Interesting facts about bobcats for kids

Bobcats are a kind of lynx, which is known for having long, pointy ears, and scruffy fur around the neck, making lynxes look like a feline version of a wise old man. This distinctive and easily recognizable appearance is part of what makes lynxes so memorable.

Its fur can be different colors, from grayish brown to tan or orange, but is also spotted, which helps it stay hidden while it's hunting its prey. It also has the black tipped ears, white belly fur, and short tail of all lynxes.

Where do Bobcats Live?

Bobcats can be found in many places throughout North America, particularly in western areas, and their great ability to adapt to different environments helps them survive in a wide variety of climates and regions. They can be found everywhere from hot, humid Florida swamps, the deserts of the Southwest, or high in the mountains.

However, a bobcat's favorite environment is usually a dense forest, where it has plenty of places to hide while it's looking for prey, and can make use of its great climbing skills.

Unlike many other wild animals, bobcats can survive alongside humans in certain types of environments, like city edges or small towns, where it's still close enough to forests or other wilderness areas to find food and survive. This means it can occasionally be found in a backyard, where it might run into trouble with a family dog or cat.

What do Bobcats Eat?

Bobcats are opportunistic, and will eat any animal they can get their little paws on. Rabbits are usually their favorite, but they also go after rats, mice, insects, foxes, skunks, and other small animals. They can even go after bigger prey like deer, though usually just the little ones. Diet also depends on where they live, and what sort of prey they can find.

Bobcats prefer to hunt in the morning or evening, although in winter they become more active during the daytime, when their prey is more active as well.

Like most felines, bobcats prefer to sneak up as close as they can to their prey, using their spotted fur to blend in with bushes or other cover before pouncing. If they catch something big, they keep coming back to finish the whole meal.

Although bobcats aren't usually the target of other predators, they sometimes come into conflict with coyotes, wolves, cougars, or other large animals. Plus, since they sometimes try to eat farm animals, like sheep, they can face dangers from farmers trying to defend their animals.

All about bobcats for kids

Life of a Bobcat

From kitten to adult

Bobcat kittens are born blind, and stay that way for about 10 days. They stay in the den until they're a few months old, when they're big enough to go along with their mom while she's looking for food. At about six months, they go off to find their own territory.

Bobcats live alone, and can be very territorial. Unusually for most cats, and most animals in general, bobcats can have several dens, traveling during the day in search of food, and sleeping in a different den each night.

The average lifespan is somewhere between 6 to 10 years, although in captivity, bobcats can live much longer, with one bobcat living for 32 years.

Luckily for bobcat fans, populations are stable, and international organizations have labelled them "least concern," meaning they're not endangered, and overall, they seem to be doing just fine.

It's tough to estimate how many of any animal exists, but scientists estimate between 700,000 and 1,500,000 bobcats live in the wild. This is despite the fact that, for many years, the bobcat was hunted for its fur, for sport, or to defend farm animals from getting attacked. Because it can adapt to so many environments, and can live near cities and other human settlements, the bobcat has managed to avoid the kind of trouble that threatens many wild cats, especially the big ones.

However, conservation efforts are still important, especially in areas where hunting and trapping is allowed. Some states have lost their bobcat populations completely, and continuing human development is always going to pose challenges to any wild animal.

Pictures of bobcats for everyone to enjoy

Bobcats in Myth and Legend

Arts and literature about bobcats

Like felines all over the world, the bobcat occupies a special place in native mythology, with Native American legends telling stories about how the bobcat got its spots, or how it symbolizes certain forces in nature.

Nowadays, bobcats are popular symbols for companies, sports teams, and other organizations, who enjoy using the animal for its distinctive appearance, mysterious nature, and popularity. No doubt bobcats will continue to be popular for many generations.

Read on and learn more 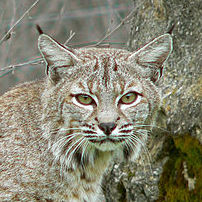