Want to learn all sorts of fun and interesting lynx facts for kids? Learn all about this fascinating, bearded wise man of a feline!

The Lynx has managed the lucky distinction of coincidentally looking like a wise old man, with its scruffy beard, and long, pointy ears that give it that memorable, royal appearance. Kind of like a miniature lion!

So read all about lynxes, and learn fun and interesting facts about the lynx, for kids, but with plenty that adults will enjoy quite a bit too.

Fun and interesting facts about lynxes

The lynx is a different kind of cat, with long, scruffy neck fur, long, pointed ears, and short tails, giving a distinctive appearance that plenty of kids enjoy, because it looks quite a bit like a wise old man with a beard. This is what some kids find most appealing, and why the lynx makes such a memorable impression. It just looks so cool!

Lynx, or lynxes (either way is correct), live all over North America and Northern Asia, with a lot of adaptations that help them survive in the colder environments, such as wider paws that allow them to walk on the snow without falling in, thicker fur, and shorter tails. In general, the farther north a lynx is found, the more features it has that help it survive and hunt in the winter. They're also known for their long hind legs, which gives them a characteristic "bobbing" style of running.

Lynx fur can be found in several different colors, including brown, gray, gold, or beige, with white fur on the belly, and spots to help in blend into the environment, especially when it's sneaking around in tall grass or bushes to creep up close to its prey.

Like most cats, lynxes tend to live alone once they're old enough to hunt and survive on their own. Lynxes tend to wander over large territories, sometimes having multiple dens and sleeping in a different one each night.

Four species of lynx exist: Eurasian and Iberian (found in Europe and Asia), and the Canada lynx and bobcat, both found in North America.

Fun facts about the Eurasian Lynx

The Eurasian Lynx is the biggest of all the lynxes, with a body about 3 to 4 feet long (0.8 to 1.3 meters), with the biggest weighing up to 84 pounds (38 kg), though the average ones weigh about half that. They can be found in the cold, snowy environments of Northern Europe and Northern Asia, and in the mountains of Central Asia as well, preferring forests, where their camouflage and sneaky hunting style work best. They have big paws to help them balance on snow, and thick fur to help keep warm.

A Eurasian lynx likes to eat all sorts of animals, like rodents, rabbits, foxes, and birds, but can also attack much larger animals like boar or deer when other food is hard to find. They usually hunt at night, or morning or evening, and like most cats, they creep up to their prey as close as they can, then pounce on it.

Luckily, the Eurasian lynx is not considered an endangered species. With some of its favorite habitat way up north where it's freezing cold, it doesn't have to worry too much about humans creeping into their territory. Although its range has shrunk in some places, like Europe, it still has plenty of places to call home for now.

Click to find more and buy online from Amazon!

Fun facts about the Iberian Lynx

The Iberian lynx lives on the Iberian peninsula, which includes Spain and Portugal. Because the Iberian Lynx finds itself right in the middle of modern countries filled with human development, it has become critically endangered, and is one of the most endangered cat species in the world, with only 100 thought to be remaining in the wild. Spain is working to conserve this population, protecting its habitat and outlawing hunting, but it's going to take a lot of work to bring this species back from such a difficult position.

Because it lives in a warmer environment than most other lynxes, the Iberian lynx has much shorter fur, which is usually gray or brown, and spotted. It can grow about 3 to 3.5 feet long (about 0.8 to 1.1 meters), with an average weight of 21 to 28 pounds (13 to 27 kg), making it smaller than the average Eurasian lynx.

Unlike other lynxes, the Iberian lynx can be found in more open environments, like grassland, though can also be found in mountainous areas and forests. Although it loves to hunt the European rabbit, it has a harder time finding them due to disease that has reduced the rabbit population, so it also eats rodents, insects, birds, and other small creatures. It can go after bigger animals like deer, but since it's smaller than other lynxes, it won't do this as often.

Pictures of the endangered European Lynx

Click to find more and buy online from Amazon!

Fun facts about the Canada Lynx

As you might guess, the Canada lynx lives all over Canada, and some areas of the northern United States, and its colder environment means it has thick, fluffy fur to help it keep warm, even in the frozen, snowy winters it calls home. It's about twice the size of a house cat (though smaller than the Eurasian lynx), and kind of looks like a cat wearing a winter parka.

Its fur changes color with the seasons, with a brownish gray color in the summer, and a more silvery brown in the winter, to help it blend in with its environment.

Other features that help it survive in winter are its wide, furry paws, which help it keep warm and balanced when walking through deep snow.

The Canada lynx eats almost nothing but snowshoe hares, so their populations are often influenced by each other, but it can also eat rodents, birds, or even deer if they're strong enough to go after one of them.

When hunting, the lynx likes to sneak up on its prey and pounce on them, like most cats, taking advantage of hiding places and its camouflage.

While the Canada lynx is not considered endangered, it still faces threats, like any other wild animal, due to habitat loss, human hunting, and other factors. But it has the advantage of enjoying the cold weather up north, where humans are less likely to expand, giving it a good chance of surviving for a long time.

Pictures of the snow Canada lynx

Facts about the Bobcat

It may have a different name, but it's still a lynx. The bobcat can be found in the United States, and in the southern parts of Canada.

Although it can be found across all sorts of environments, it has a harder time in the snow than the Canada lynx, so they're usually found in different climates, the bobcat in the warmer areas, and the Canada lynx in the colder regions.

While the bobcat is most often found in forests, it can inhabit all sorts of environments, from mountains to deserts, and even shares territory with humans, occasionally found in backyards near city edges.

The bobcat is the smallest of the lynxes, but can still take down much larger prey, like deer, when its usual diet of rodents, rabbits, or birds might be hard to find. Because it finds itself near humans, it sometimes attacks farm animals, too.

Although the bobcat has faced threats from humans due to habitat loss and hunting, it's still going strong, found in many areas of the United States, probably due to its adaptability, excellent hunting skills, and clever survival instincts.

Check out Bobcat Facts for Kids for more info on this secretive hunter.

Beautiful lynx photos from around the world

I live in one of countries where you can still encounter a lynx in a forest. He belongs to the 'big three' family of big beasts of Europe (together with wolf and bear). Interesting facts you presented. May I add another one?
Our national hockey team has nickname 'Lynxes'. It is not a team of superstars (o.k., with the exception of Anze Kopitar from LA Kings), but it has big and brave heart like the real lynx... 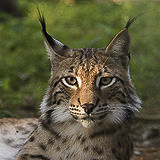