On February 6th 1952, George VI died suddenly in his sleep. 60 years on, his daughter Elizabeth is Britain's oldest reigning monarch.

For six decades, Elizabeth Alexandra Mary Windsor has been the monarch of sixteen countries. They used to number 32.

Scattered across them, 156 prime ministers have taken office only after being invited to do so by their Queen. She has reigned through every major event of the second half of the 20th century.

At 85 years old, she is historically the oldest monarch that ever ruled in her realm.

Queen Elizabeth in Sandringham for her 60th Anniversary as Monarch

For her, this isn't merely the day that she became queen. It's also the memorial anniversary of her father's death.

On February 6th 2012, Britain awoke to the grip of severely bad weather. The snow and ice had grounded planes in several airports, including Heathrow. Major motorways seemed just like car-parks, as people waited stationary or maneuvered past abandoned vehicles.

For many, the big issue was how they would get to work, or if it wasn't better to simply stay indoors. Winter was back with a vengeance.

But it was also a great day for patriotism. Those with Royalist fervor could note with glee that their Queen had been on the throne for six decades; and she was still going strong.

Queen Elizabeth II spent most of the day at Sandringham Palace with members of her family. Traditionally, she doesn't emerge on her Accession Day, but she made an exception this year. She visited Dersingham Infants and Nursery School, in nearby King's Lynn, where she met the children and inspected a montage of newspaper print-outs about her Coronation.

In return, the little ones performed a concert, which included Let's Do The Time Warp Again from the musical Rocky Horror Picture Show.

There was also a trip to King's Lynn Town Hall, where Mayor Colin Sampson gave an address thanking the Queen for her dedication as monarch. Queen Elizabeth II then mingled with the crowd outside.

She also had been spotted in public the day before, when she was filmed attending the local West Newton Church. After the service, she met well-wishers at the church gates, receiving flowers and other small gifts.

This wasn't a grand affair. That will come later in the year, with a whole calendar worth of events to celebrate her Diamond Jubilee. While everyone else views the actual date as Accession Day, the Royal Family have a more personal, sadder anniversary to contemplate.

February 6th is not only the day that Queen Elizabeth II took the throne. It was also when her father, George VI, died.

It's difficult to imagine the enormity of emotion that must have swamped the Queen in 1952.  She had to simultaneously assimilate the facts that she had lost a parent and gained the crown of several countries.

Elizabeth wasn't even at home. Her father had waved her off at the airport, less than a week before. She was miles away in Kenya, when her husband, Prince Philip, received and then broke the news to her.

She has said since that she never sees February 6th as a day of celebration for her crown, but a day of mourning for her father.

Explore the world of a princess, who was never born to be queen, as she celebrates 60 years on the throne.

Elizabeth II is the constitutional monarch of 16 out of the 54 sovereign states within the Commonwealth of Nations, and Head of the Commonwealth. In order of foundation, the 16 independent Commonwealth realms are the United Kingdom, Canada, Australia, New Zealand, Jamaica, Barbados, the Bahamas, Grenada, Papua New Guinea, the Solomon Islands, Tuvalu, Saint Lucia, Saint Vincent and ...

Will you be celebrating the Diamond Jubilee in 2012?

King George VI was the Monarch Portrayed in 'The King's Speech'

Ill-suited to becoming king, painfully shy Bertie was worn out by his duties. He died sixty years ago.

In 2010, the film The King's Speech won global acclaim and four Academy Awards. It had been nominated for many more, a total of twelve.

The movie told the story of the stammering, socially inept King George VI. Affectionately known to his family as Bertie, he had been an unwilling claimant to the throne.

Bertie had only been crowned after his elder brother, Edward VIII, abdicated for the love of his American fiancee.

Prone to becoming tongue-tied when nervous, Bertie sought speech counseling with an unorthodox teacher. The lessons and exercises paid off, when he was able to successfully deliver his Christmas address to the nation.

However, he was soon to be ruling over a country heading into the horrors of World War II. Bertie was determined to do his duty, keeping up morale and ensuring that he knew every detail of what his people suffered.

For a man of such fragile sensibilities the strain soon told. He emerged from the war utterly worn out and in declining health.

Nevertheless, he didn't appear close to death, when he escorted his daughter to the airport, on January 31st 1952. There was no indication that this would be the last time they would see each other.

Bertie had a coronary thrombosis in his sleep, during the early hours of February 6th, 1952. He never woke up.

How the news reports told the country that the King was dead. Long live the Queen!

The King's Speech DVD and Books

King George VI was the father of the current British queen. Hollywood immortalised him again with an Oscar winning movie.

More on the Diamond Jubilee

Elizabeth Tower? Renaming Big Ben for a Diamond Jubilee
London's most famous landmark could be renamed in honor of Queen Elizabeth II, if Members of Parliament get their way.

LOL! Really? That's a funny coincidence. I wonder if she knows? *giggling*

There's a silly irony in the choice of song sung to the queen by the kiddos...When asked how he came about the voice of Dr. Frankenfurter, Tim Curry said, "it's a mix of my mother and the Queen." his mum was thrilled, no report on how the Queen felt about it ;) This is from an old NPR interview with him.

Thank you, Kate. You have just encapsulated in a nutshell my exact thoughts on the matter.

It's a little like standing in front of an historic building in danger of demolition. Only this time, the bricks and mortar are living people. It doesn't mesh with my politics at all, but my historian senses are tingling!

I think it's such a strange position for anyone to be in. Being born into a position that relies on a parent's death for promotion. It's cruel in a way.

I love the whole history aspect of it. The fact that you could know for certain so much about your ancestors fills me with joy.

Is the royal family value for money? I keep seeing figures that suggest they're great for the economy, but I'm not convinced about how independent or objective those figures are.

Politically, I'm completely at odds of the idea of an hereditary ruler.

I don't mind Charles too much though. He seemed like he could have been an old hippy, if he'd just been born into a lower class!

While I think she's done a reasonable job, I'm not convinced of the role of the monarchy in modern Britain. I'm not hugely opposed to it, until Charles gets the throne, now that's a scary thought.

London's most famous landmark could be renamed in honor of Queen Elizabeth II... 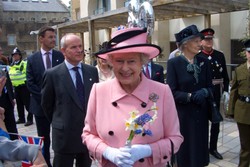 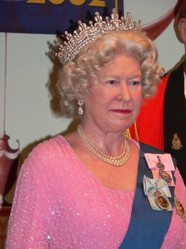 As Queen Elizabeth II celebrates 60 years on the throne, Diamond Jubilee merchandise presents a unique opportunity to own a keepsake.
76%  8   7 JoHarrington
United Kingdom of Great Britain and Northern Ireland 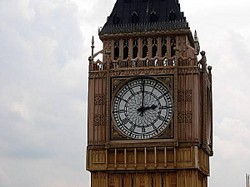 London's most famous landmark could be renamed in honor of Queen Elizabeth II, if Members of Parliament get their way.
Loading ...
Error!