Captain America Costumes are going to continue to be incredibly popular following the release of the Movie which has been a great hit. What better way to show your patriotism!

You cannot fail to have noticed the that Captain America, the comic book superhero has now hit the movie screen with the release of the "Captain America: First Avenger" movie.

On a side note it's great to know that some of the scenes for Captain America were shot in my home city of Manchester here in the UK!

There is no doubt that Captain America Costumes are going to be incredibly popular this Halloween!

It's a great costume for the adults and the kids of both sexes and for all Americans it's both patriotic and a superhero costume all in one!

In Captain America we find Steve Rogers feeling very frustrated at being unable to fight for his country in World War II. He takes part in an experiment which boosts his strength to the maximum possible for any human.

While Captain America does not have the "superpowers" we often associate with superheros he does have amazing strength and of course his famous indestructible shield.

Red, White and Blue and The Indestructible Shield! 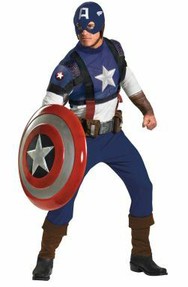 Like other superheros Captain America has a really distinctive outfit which leaves no-one in any doubt that it is him!  As you would expect from his name he uses red, white and blue colors of the American flag in his costume which features both stars and stripes.

Captain America never leaves home without his indestructible shield, which he uses both as a weapon and as a means of defending himself. The shield is circular in shape, and has red and white stripes around the edges together with a white star on a blue background right in the middle.

Captain America also wears a very distinctive blue helmet which has a large "A" on the front.  The helmet is shaped around his head and eyesand leaves just his mouth uncovered.

Captain America's costume is then made up of a blue jumpsuit which has a large star on the chest together two smaller stars on the side of each of his shoulders.

As you might expect there are officially licensed Captain America Halloween costumes which are available for you to buy.  They come in appropriate sizes and styles for both the adults and kids and look extremely convincing.  Dressed in your Captain America Costume you are going to be instantly recognizable as this famous superhero. Take a look at the:

There are also Captain America Costumes for women  which turn the costume theme into a dress but of course they still feature the famous Captain America shield! You can take a look at:

Does The Captain America Costume Appeal To You?

I'm sure a lot of kids will be picking a Captain America costume for Halloween!

I'm sure Captain America will be a popular costume this Halloween!

All a person who is shopping for costumes has to do is spend some time at all your wonderful pages - you have an excellent selection - Captain America is one movie that I am interested in seeing...but all the kids are grown, so no costume shopping unfortunately.

I think the Captain America costumes will be a huge hit this year, especially! 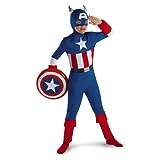 Halloween 2017 will soon be upon us! What are you planning for Halloween this year? Is your Costume ready or have you still to buy it? Have you got your Halloween Costume ready?
Loading ...
Error!