Tom Hanks stars as the eponymous Captain Richard Phillips, in this dramatic reconstruction of the 2009 hijacking of the US MV Maersk Alabama by Somali pirates.

It was Barkhad Abdi's grin that did it.

Until I saw him receive his BAFTA award for Best Actor in a Supporting Role, I'd been content to let 'Captain Phillips' pass me by. I'd seen it advertized everywhere, but it didn't really appeal to me.

Then Barkhad Abdi's gaping expression, as his name was read out, moved me to tears. His beautiful shock upon that stage - with the crowd all going wild, and his chipmunk grin covering a speechless delight - decided matters for me.

I'd watch his movie. It had made his dreams come true.

True Story of Modern Piracy Around the Horn of Africa

'Captain Phillips' reminds us that real world pirates were a lot scarier than we've been led to believe by Johnny Depp movies. 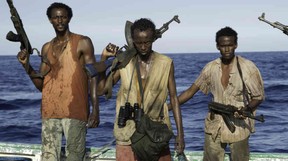 Talk of pirates tends to get consigned to the history books. The most common mental image involves parrots and hooks, against a backdrop of the Caribbean.

But piracy exists in the modern day too. Forget swash-buckling swords. Today's pirates carry semi-automatic rifles and sub-machine guns. They terrorize ships crossing to the east of Africa.

Captain Phillips tells the true story of an attack on an American cargo ship in 2009. Somali pirates were able to board the vessel from two skiffs. They demanded millions in ransom, then abducted the captain when their plans seemed set to be thwarted.

The hijack prompted a massive response from the US navy, with predictable results.

But this isn't a one-sided movie. Director Paul Greengrass wasn't interested in just telling the story from the American point of view. There was a reason why those four Somali men had turned pirate, and he wanted to make that clear too.

With stunning performances all round, Captain Phillips is a thought-provoking action and adventure movie. It kept me rapt from start to finish.

Remember that I'd first clapped eyes on Barkhad Abdi at an awards ceremony. I was having a cute attack at his adorable reaction to winning.

Therefore it was quite a shock to see him utterly transformed and menacing as Abduwali Muse, the leader of the Somali pirates. I guess that's why he got the best supporting actor award.

We expect great performances from Tom Hanks. But Barkhad Abdi is a newcomer to the movie world (he got the job in open auditions, beating 700 candidates for the part), so there were no preconceptions.

Put them together and there were sparks. I found my heart racing, unsure which of them to support.

Nor were they the only cast members to portray their characters convincingly. I was genuinely chilled by Faysal Ahmed's half-crazed, gun-toting Bilal.  I wanted to cry for Barkhad Adbirahman's young, out-of-his-depth Little B.

The tension that all four pirates managed to recreate, alongside Tom Hanks, rendered this an entirely gripping movie.

What made it even more believable was that the dialogue between them was all Somalian. There were no subtitles either. Yet it really didn't matter. The Somali actors made it comprehensible through their body language, actions and expressions, without ever falling into the trap of being too blatant.

After a while, you even forget that you can't speak Somali. You're right there with them.

Yet I may have skipped too fast past Tom Hanks to get to his co-stars. Yes, we do anticipate perfection in his performance, but that isn't to take away from what he pulled off in this movie. There were scenes there which made me ache with wanting to comfort and/or rescue him.

Prepare to be moved emotionally in a way that you don't expect with action movies. They are all that good.

Captain Phillips Does NOT Pass the Bechdel Test

I always finish my reviews with reference to this simple, low bar criteria, which is aimed at evaluating the role of women in films. Too many fail and unfortunately, Captain Phillips is one of them.

The Bechdel Test asks that there are two or more named female characters in a movie. They must have a conversation with each other, and the topic cannot be a male character.

Paul Greengrass strove for historical accuracy in Captain Phillips. The real life MV Maersk Alabama did not have a female crew, nor did any woman take part in the piracy upon it. Hence he didn't cast any actress to fill those parts.

There were women on board the American naval vessels. But they were not named. Andrea Phillips (Catherine Keener) was named, but didn't speak with another female.

Movie Review of All Is Lost (2013)
Robert Redford stars as an older man alone, on his failing boat, in the middle of an ocean. Survival would take a lot in ingenuity and hope.

Movie Review of The Impossible (2012)
Closely based on a true story, a young family are holidaying in Thailand during the tsunami disaster of 2004. Separated, the survivors hunt for their loved ones.

Movie Review of The Hunger Games (2012)
It's Big Brother gone mad, with teenagers forced to fight to the death in order to survive. Starring Jennifer Lawrence and Josh Hutcherson.

Movie Review of Seraphim Falls (2006)
Liam Neeson and Pierce Brosnan slog it out as enemy veterans of the American Civil War. While the rest of the USA find peace, redemption is a little harder for those with a grudge.
Updated: 03/16/2014, JoHarrington
Thank you! Would you like to post a comment now?
5

I wasn't too sure about that one either.

They weren't! All four of the Somali actors basically saw an advertisement on television. They decided to check it out, pretty much for a laugh, and found over 700 people waiting in the queue. But they stood in it anyway and became world famous.

Nice review! I saw the movie and really liked it. I didn't mean to see it, got confused when I bought my ticket and ended up watching it. I'm glad I did. It was great! And yes, that Somali guy was fabulous. I don't think they were even trained actors. So amazing he got a BAFTA. 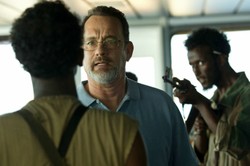