Have you ever looked at your cat and thought, 'what this kitty needs is an inflatable unicorn horn'? Then you've come to the right place!

People are always dressing up their dogs. Canine accessories abound in the market and they all look very cute with them. (Or ridiculous, obviously, depending upon the accessory and their owner's taste.)

But why not the cats? Ok, they are independently minded creatures with a great line in disdainful looks. That's no reason not to let them play dress up! Particularly with Halloween causing every other creature in the household to don their costumes!

Your cat will just love a unicorn horn. You know it.

If you search your darkened soul, you will find that you've always wanted a caticorn - or is that a uni-cat? - and you've been thwarted only by the fact that such creatures do not actually exist.

Here is the perfect compromise!  Get your real life cat and stick a unicorn's horn on it. This is utterly painless (no grafting necessary), as the horn fits on with a funky four way strap. It is designed to be physically comfortable, though your cat may have Views about how it looks.

The cat unicorn horn is five and a half inches long (14cm) and created out of vinyl. You just have to blow it into shape before attaching it.

There's a choice between white (see above) or, perfect for Halloween, the black of the evil feline unicorn horn (see below). As we all know, black and white match perfectly with anything, so it's up to you which you'd prefer for the color of your moggie.

We do have to give fair warning here. The unicorn is a symbol of grace and purity. The mythology tells us that only a virgin may touch one.

It's entirely possible that your pussy may take on these properties. You will not be able to stroke it, if you aren't pure of body and soul, with never a dirty thought crossing your mind. Reckon you fit the bill?

There's also the fact that unicorns are wild, untamed creatures. Your cat might suddenly seem not so tame as it once was. In fact, lots of pawing at its forehead, shaking its head and trying to dislodge an inflatable horn might very well ensue.

Let's See that Unicat in Action!

Ok, let us be honest with ourselves here. Most cats are going to not love the inflatable unicorn horn, as much as you love watching them wearing it.

Some cats will attempt to remove it. Previous buyers have suggested glue, or locating a willing veterinarian to graft it on, in order to counter this eventuality. I'm choosing to believe they were talking firmly tongue in cheek.

Other cats will merely glare at you as if they want you dead. This isn't all that unusual for cats at the best of times, unless food or a fuss is in the offing. I say go for it!

You may need this immediately after getting the inflatable cat unicorn horn...

I, for one, am cheering that sentiment! Long live imagination!

People's imagination has no limits...

But didn't we all have fun?

And yay! My work here is most definitely done. Enjoy your day!

I thought you were mad writing this.... then I realised that I was probably MORE mad for reading it.

Thanks for making my day start with a HUGE smile.

I have had way to many cats in my lifetime. I could stand for more, though. Cats have oodles of personality, once you know what to look for, and I've even come to expect certain personality traits from breeds/types of cats.

Anyways, once upon a time I had a cat named Who Who. Who Who would wear this. For a while at least, but he would. Who Who was the spunkiest, most sociable cat I've ever had. He's also the only cat I've ever had whose emotions I registered nearly immediately for what they were, I don't know how to explain it. Like, when I brought home Penelope as a baby kitten, he didn't have the same reaction as practically every other cat, which was INTRUDER!! KILL!! He sulked by the window, and when I asked him what was up, I saw in his adorable cat eyes pure jealousy and hurt. It was the strangest thing, it isn't something a person would ever expect to see in the eyes of a cat. But he was a unique cat, and he was extremely loyal to us, it was very cool. He died of panleukopenia (which is practically the plague for cats.) Anyways, so he would wear it simply for the attention it would get him, and he'd have loved it.

And then there's Bubbles. Bubbles is an ancient cat. He is so old he doesn't care about anything but food anymore. My favorite thing about him is how he'll find a place to perch directly behind you (often pretty precariously too) and then reach over your shoulder for the food on your plate. But he does it so slowly, like he's being the greatest sneak! So he'll sneak up behind you and hang out really quietly for a bit, and then after a bit he will start inching his paw toward your plate, at the rate of a 2 cm/minute. Bubbles is also senile, and I don't know what he sees when I open doors, but clearly whatever it is, it is extremely frightening. (So much so that if I open a door, or suggest that Bubbles go outside, he will hide himself in a dark hole somewhere in the house for DAYS.) Anyways, if I put this on Bubbles and then immediately offered food, he'd take the food and leave the unicorn horn. And after that I doubt he could be bothered with getting it off, he'd just sleep until he wanted more food.

That is a not even realistic two, out of a like a million cats I've had, that might stand for this. And both are a very distinctly abnormal two cats.

And also, something about the horn just looks really wrong, too.

He doesn't look happy, does he? Hilarious, but unhappy. I'm sure the owner could have won some brownie points next meal time.

The cat in the video looks . . . perturbed. Hope the owner is ok.

PS You have a message on Skype from me (unrelated)

*giggle* Not even for the worth in YouTube video footage?

An iRobot Roomba is a great vacuum cleaner for those with pets or allergies. ...

Gifts for the Cat Lover in Your Life

Are you shopping for someone who loves cats? This is the place to find uniqu... 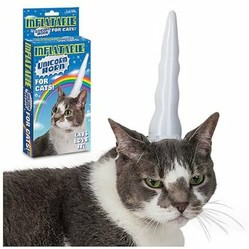 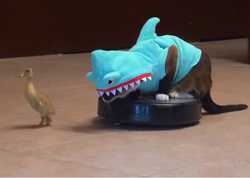 An iRobot Roomba is a great vacuum cleaner for those with pets or allergies. It's also the perfect size for cats to hitch a ride, as many cat-lovers have hilariously discovered.
72%  9   6 MBC
Cat Gifts 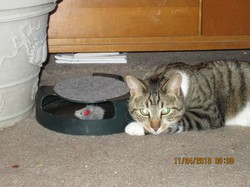 Gifts for the Cat Lover in Your Life

Are you shopping for someone who loves cats? This is the place to find unique cat lover presents.
Loading ...
Error!