Want to learn fun facts about cheetahs for kids? Check out interesting facts about the world's fastest animal!

Cheetahs are a fascinating creature, beloved by kids and adults all over the world, famous for its beautiful spotted fur coat, and for being the fastest animal on Earth.

So read and read all about cheetahs for kids, and adults too, with fun and interesting cheetah facts, for those who can never get enough of big cats and their mysterious nature. The kittens are cute too.

Fun and interesting facts about cheetahs for kids

Cheetahs have fascinated people from cultures around the world, and are one of the most recognizable animals in Africa, one that everyone hopes to see on a safari.

Known for being fast runners, cheetahs can run up to 75 miles an hour (120 km/h), making them the fastest animal on the planet. There's nothing in the world that can outrun a cheetah!

A cheetah can grow up to 160 pounds (70 kg), and grow up to 5 feet long (1.5 meters). Although it's pretty big, it's not considered one of the "big cats," since it cannot roar. Instead, cheetahs can purr, just like a house cat!

Where do Cheetahs Live?

Cheetahs live mostly in Africa, with some scattered around Asia as well.

They prefer open environments, like grasslands and savannas, where its high-speed hunting gives it an advantage over animals that have nowhere to go.

Cheetahs need to live in areas with lots of other animals, so they will have enough to eat, meaning they need large territories to roam across.

Unlike other cats, they're not particularly good climbers, since they have only semi-retractable claws. This is good for running, but not so great for climbing. They can jump onto low branches, but they can't climb as easily as other cats.

What do Cheetahs Eat?

Cheetahs like to hunt gazelle, impala, and other antelope, but can also hunt smaller animals such as rabbits, or bigger creatures like wildebeests or zebras, especially if they're hunting in groups.

A cheetah will sneak up to its prey as close as it can, hiding in the bushes, where its spots will help keep it camouflaged, before it leaps out to chase down its prey.

The best time for a cheetah to hunt is in the morning, or the evening, when it's not so hot outside, but it still has enough light.

Although cheetahs are incredibly fast, they need to catch their prey quickly, since cheetahs can't stay at that speed for very long without getting tired. Even so, they manage to catch something about half the time, which is highly successful for any hunter, and much better than many other wild cats.

After that, it gets a little more difficult. The savannah is filled with other dangerous animals, and cheetahs are designed for speed, not for fighting back against larger creatures. If it doesn't eat its prey fast enough, it can get stolen by stronger animals like lions or hyenas. This happens about half the time.

Cheetahs on the Prowl

What Makes Cheetahs so Fast?

Cheetahs have a number of advantages when it comes to speed. They have long legs, but a thin body, making them excellent runners. Their claws are only semi-retractable, providing excellent grip as they run. Their tails can also be used like a rudder on a boat, which helps them turn quickly, even when running at high speeds.

With large lungs and nostrils, and a strong heart, a cheetah's body can deliver large amounts of oxygen very quickly through the bloodstream to the muscles, providing plenty of energy for a cheetah's high speed chases.

Another distinctive feature is the pair of "teardrop" markings underneath the eyes. These dark spots help keep the sun from reflecting too harshly into the eyes, which can be very helpful during a chase.

Cheetah on the Run

Life of a Cheetah

How cheetahs grow up and live

A newborn cheetah cub will live with its mother for a year or two, when the mom leaves the cubs to take care of themselves. For a few months the siblings will stay together, taking care of each other and hunting together, before the female leaves to go off on her own. Brothers often stay together for life, hunting in small groups, which helps them take down larger prey.

Why are Cheetahs Endangered?

Habitat loss and other threats to the cheetah 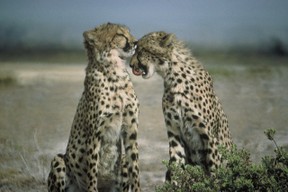 Cheetahs face a number of threats, mostly from human interaction. As humans expand, with new cities, roads, and other developments, the cheetah's habitat shrinks. This is extremely challenging when populations are separated from each other, since they have far more trouble finding others to breed with, leading to further population reductions. Farmers and poachers are also a threat, as they will often kill a cheetah to protect their farm animals, or to sell the fur on the black market.

Life is difficult for a predator that isn't designed to be at the top of the food chain, either. Cheetahs face dangers from other predators, such as lions, hyenas, and other creatures that are larger and stronger, and who often like to steal their prey.

Another challenge is that cheetahs have very little genetic diversity. Scientists speculate that the population suffered a huge setback during the last ice age, reducing their numbers significantly, as well as their gene pool. Since the cheetah is also a highly specialized animal, built for speed in an open environment, it has trouble adapting to new environments.

The good news is that there are over 12,000 cheetahs estimated to be living in the wild, which makes it safer than other big cats such as the tiger, and conservation efforts such as the Cheetah Conservation Fund and the Cheetah Conservation Foundation, as well as other multinational groups, have been working to save the species. Since cheetahs are extremely popular with safari groups, they are also quite useful to the ecotourism industry, so countries have lots of reasons to try to save the cheetah.

Pictures of cheetahs from all over the world

Cheetahs in Arts and Literature

Everyone loves the cheetah

Like any other kind of cat, cheetahs are popular all over the world, famous for being the world's fastest land animal, and for having such a beautiful fur coat, and being such mysterious hunters. They can be found in literature, paintings, cartoons, and all sorts of other creations. Emperors and other rulers used to keep them as pets, showing just how popular they can be. Even royalty love them, just like everyone else in the world.