"Olinguito Speaks Up / Olinguito Alza La Voz" by Cecília Velástegui is a bilingual children's story, in English and Spanish, about a newly discovered charmer of a species.

Many remote mountain-dwelling animals are unknown to scientists if not to locals. But one mysterious mountain recluse, the olinguito (Bassaricyon neblina), is known worldwide since an announcement and a book in 2013. Dr. Kristofer Helgen, Smithsonian National Museum of Natural History Mammals Department Curator, announced the olinguito's reclusive existence on August 15, 2013.

Her illustrations particularly favor the vivid greens of the airborne bromeliads with which olinguitos build arboreal nests and the tomato-sized wild figs which dominate olinguito diets of epiphytic nectar and tree-dwelling arthropods in central Colombia and Ecuador.

Like all olinguito young, Cecília's protagonist is an only kit of a yearly litter. Olinguitos live year-round in the cloud-, fog- and mist-encased canopies 32 feet (10 meters) up from the root flares of gnarled, stout trees, at elevations 5,000-9,000 feet (1,524-2,743 meters) above sea level. They realize 1-foot (0.3-meter) jumps between branches during nightly foraging and socializing. They showcase limbs with reversible ankles and paws with padded soles and sharp claws for descending trunks, head-first and squirrel-like, even though they are not known to leave the treetops.

It is from these heights that Cecília's olinguito becomes entranced with Tomás the terrestrially-bound turtle. The non-talking, real-life equivalent of Tomás is Cecília's 150-plus-year-old pet Galápagos Island tortoise. Cecília indeed maintains solid understanding of environmental concerns and mammalian behavior through:

Cecília's book inspires readers of all ages to protect the world of 2013's news-breaking discovery: the olinguito.

Published on YouTube on December 16, 2013 by Cecilia Velástegui ~ URL: http://www.youtube.com/watch?v=B0KZ6NuK0VQ

Olinguito Speaks Up by Cecilia Velástegui

Olinguito is a shy and furry animal that sucks his thumb all day long and hides in the treetops of the Ecuadorian cloud forest. No one in the whole world knows that he exists.

New World natives, olinguitos have homelands on both continents of the Americas.

A pair of cinnamon eyes does not belong to a starved vampire. The look is the... 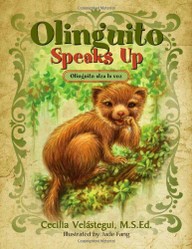 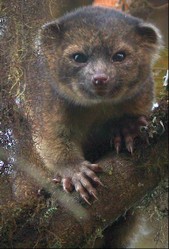 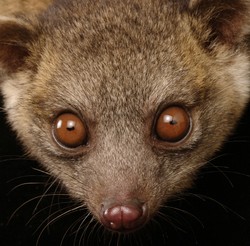 A pair of cinnamon eyes does not belong to a starved vampire. The look is the monopoly of the olingo. It keeps exotic pet and wildlife lovers from confusing olingos with kinkajous.
Loading ...
Error!