Channel Four goes behind the scenes of a male striptease agency in this First Cut documentary due to be shown on Wednesday 29 May 2013.

The male striptease industry in the UK is booming as thousands of women flock to see men showing their tackle. In this documentary, Channel Four goes behind the scenes of one of the biggest agencies to see why men do it and the effects it can have on their lives. Part of the First Cut series, the programme is due to be broadcast on Wednesday 29 May 2013.

As part of its First Cut series of documentaries, Channel Four looks behind the scenes at adult male entertainers in Confessions of a Male Stripper, due to be broadcast on Wednesday 29 May 2013. Male stripping is booming in the UK and every weekend in most major cities, women are paying to see men get naked.

The documentary will visit the Dreamboys male stripping agency, one of the biggest in the country, run by ex-stripper David Richards. He claims to know what women want, and is prepared to do whatever it takes to give it to them.

Richards is looking for new men to join his London troupe and the documentary shows footage from the auditions.

Narrator Ivana Horvat tells how tens of thousands of women last year in the UK went to see a male strip show, whether it be on stage or at a private hen party or the like. We see inside Dreamboys’ Essex headquarters – “Was it a full strip or G string?” asks the receptionist on the telephone – as well as the firm’s regional offices; it has bases in Birmingham, Edinburgh, Manchester and Newcastle.

The programme is not for the squeamish. Everything is shown as the featured men strip off, and the language is explicit to say the least. One such man is 19-year-old Danny who had to give up rugby after a knee injury and is one of the company’s latest recruits. The show accompanies him to a ladies’ night in south Wales. This will be Danny’s first full strip, and he’s nervous. His girlfriend Katie is there to watch, and she is not exactly happy about her boyfriend doing the full Monty.

Danny has to rely on passing a hat round to earn money as he won’t get paid jobs until he has proven himself. And we see him using a vacuum pump on his penis to give it a bit of extra size; this is a bit risky as it can leave him permanently damaged if not done properly.

Meanwhile, Richie, a 29-year-old topless host for Dreamboys, wants to join the men on stage but first he has to audition to pick the four new recruits for this year. Men from all over the country attend. Their ages range from 19 to 59, though the 59-year-old doesn’t last long. “Bless,” mouths Richards as he leaves.

On the darker side, we see the pressure some men are put under when they are asked to do more than with what they are comfortable. There is Benedict, who was fired from his day job as a teacher when it was discovered what he does in the evenings. And we see the negative effect it can have on their relationships.

Team behind Confessions of a Male Stripper

First Cut is a documentary strand that showcases distinctive new films by up and coming directors. Made by CB Films, Confessions of a Male Stripper was produced and directed by Rachel Tracy and executive produced by Malcolm Neaum and Jonah Weston.

It sounds very sad. And I can't imagine what women get out of it, either. Thanks for the article!

Doubt I'll be watching but it was an interesting read nonetheless, Steve. thanks.

I couldn't resist, WOW what they put themselves through... YIKES!

Household vacuum cleaners are not recommended as a substitute

Vacuum pump? I'm trying to imagine......Goodness I'm behind the times. Sounds like an interesting show to say the least. 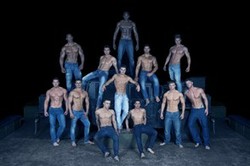