Creamed Brussels Sprouts is a hearty comfort food which is easy to prepare as well as delectably rich in appearance, aroma, taste, and texture.

Creamed Brussels sprouts (Kapustová poupata na smetaně) is a popular comfort food in the hearty cuisine of the Czech Republic. The miniature cabbage lookalikes impart a distinctive, rich taste which is matched by the vegetable's textured lush greenness.

It is easy to make, affords hearty aromas while cooking, and is wonderfully filling.

creamed Brussels sprouts ~ addition of cheese is a popular variation

Although Brussels sprouts may look like miniature cabbages, they have a distinctive taste which bursts with the nutritious deliciousness of green vegetables.

The compact buds' attributes in a 1-cup serving include:

Over-boiling has the significant disadvantage of diminishing the efficacy of the vegetable's anticancer compounds. Also, overcooking grays the buds and releases distastefully strong flavors and odors that derive from a sulfurous compound, glucosinolate sinigrin, and that are off-putting.

Marking a cross on each bud is considered to encourage even penetration of heat.

Brussels sprouts enjoy a positive reputation in the cuisine of the Czech Republic, where a favorite, basic recipe easily and quickly revs flavor through blending in a cream sauce.

Depending upon portion size, yields 6 to 8 delicious, nutritious servings.

2. Add Brussels sprouts and simmer over medium heat for 15 minutes, until tender.

6. Remove from heat and serve hot.

katiem2, Thank you for the revisit. I'm sorry to hear about the continued migraines from your traumatic accident.
Greens abound with vitamin K, whose levels you have to monitor if you have post-traumatic blood issues that used to warrant Coumarin.
Do you know about Donna Eden and energy healing? Her book lists pressure points for easing pain. Also I use the Ortner siblings' tapping solutions.

Derdriu, Good to hear this about green foods impact on headaches, I too get headaches, rather migraines as result of head trauma from auto accident.

katiem2, Thank you for the visit and the appreciation. I love the recipe because headaches that I get from an accident are relieved by eating green (vegetables, that is, not green desserts on Saint Patrick's Day). Thank you for the information about sauteing in olive oil with cranberries: that sounds good for Thanksgiving.

Margielynn, It's great that your family loves delicious, nutritious Brussels sprouts. My family recipe indeed is scrumptious. For those recipes that have not been preserved from my Czech lines, I pull out my copy of The Czechoslovak Cookbook, which is authentic, easy, and highly regarded.

My family loves Brussels sprouts, this recipe sounds delish! Thanks so much for sharing!

candy47, Me too, it's the cream base that makes or breaks recipes such as this. I admit to using select canned soups just as canned soups from time to time, but never in a recipe and only under the rarest of circumstances.

I love the cream base in this recipe. So many creamed recipes start with a canned soup base. I don't use canned soup, for any reason.

Me too, I agree that research needs to be conducted.
Problems with one indeed can be indicative of stress with them all since Brassicas are low in soluble fiber and high in insoluble fiber.
Additionally, there is the effect upon the digestive equation of the individual's internal pH, sphincter closing/opening, and serving preferences. For some, the problem apparently lies in general unappealability of the look, smell and taste of Brassicas. For others, it may be the ingredients within the Brassica dish (particularly as a soup) or the items (particularly caffeines and fats) after, before, or with which it is served.
For still others -- and this explains the help that a sprinkle of vinegar can give to those who find Brussels sprouts consumption problematic -- it results from off-kilter pH (for example, not quite up where it should be in the acidic range or a bit beyond where it should be in the alkaline).

It is not common knowledge that sprouts, kale, cabbage, cauliflower, broccoli and calabrese are all the same species, the very genetically varied Brassica oleraceae. So if someone has digestive difficulties with sprouts, does he also have difficulties with others of this species or is this peculiar to sprouts?

The information of adding balsamic vinegar to the stock is very interesting. Brassicas like more lime in the soil than many other vegetables do, pH 7 as opposed to 6-6.5, but vinegar is acid and therefore a chemical that neutralizes lime. I cannot be sure that there is a significance to this, but this might indicate the general reason for the problem that people with difficulties digesting sprouts have. But research would be needed

Kale is a much-appreciated vegetable in Czech cuisine. An array of recipes, e... 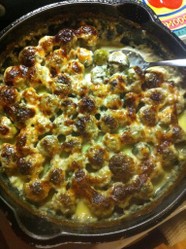 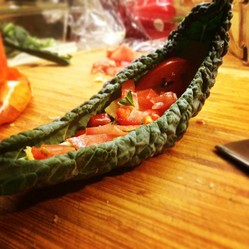 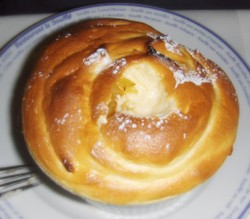