The British made Da Vinci's Demons is due to start on Fox on Friday 19 April 2013.

Filmed in Wales, Da Vinci's Demons is an eight-part series that paints a picture of Leornado da Vinci as a young man battling injustice while dealing with his own genius. Tom Riley of Monroe fame stars in the title role.
Due to start on Fox in the UK on Friday 19 April 2013 and on Starz in the USA a week earlier, the show was written by David Goyer.

Leonardo da Vinci is set to receive a makeover in Da Vinci’s Demons, a new eight-part series due to start on Fox in the UK on Friday 19 April 2013. The British-made show was set to premier on Starz in the USA a week earlier.

But do not expect a pleasant historical drama. Tom Riley plays the young da Vinci in a show that capitalises on the popularity of programmes such as Spartacus and Game of Thrones with a strong mix of sex and violence.

The first episode of this historical fantasy is “The Hanged Man” in which the fragile truce between Forence and Milan breaks down and da Vinci finds himself in troubled times. His goal of overthrowing society and exposing the lies of religion puts him at the centre of events.

Tom Riley’s acting career started by playing David in the 2006 film A Few Days in September. The same year he played Dr James Watson in Casualty 1906, which he reprised two years later in Casualty 1907. Other parts have included Mr Wickham in Lost in Austen and Gavin Sorenson in Bouquet of Barbed Wire, but he is best known for playing Lawrence Shepherd in 11 episodes of Monroe.

Filmed in Swansea, Wales, during summer 2012, the Adjacent Productions series was executive produced by Julie Gardner and Jane Tranter. David Goyer was the main screenwriter and also took on the role of producer. And he directed the first two episodes.

"Our da Vinci completely cuts against any preconceived image that you might have of Leonardo da Vinci, the great artist," said Tranter. "The way that David Goyer writes da Vinci and the way that Tom Riley brings da Vinci to life is as a very modern character."

This sounds wonderful, thanks for bringing Tom Riley's new role to our attention. :)K 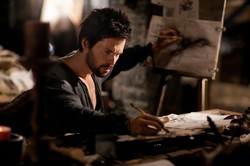