Daniel Mendoza, or Mendoza the Jew as he proudly billed himself, was a professional Jewish boxer from the East End of London who developed the art of scientific boxing.

On December 3rd 2008 a bronze plaque was unveiled in London commemorating the life and achievements of Jewish boxing sensation, Daniel Mendoza. It can be seen on the site of the Mile End Jewish Cemetery which is now part of the Queen Mary College campus. It is also the site of Daniel Mendoza’s burial in 1836.

Mendoza is unique in boxing history not only because he was the first Jewish boxing champion but because he introduced the concept of 'scientific boxing'.

Daniel Mendoza was born at Aldgate  in the East End of London on July 5, 1764. He came from a poor Sephardic Jewish family. They were Marranos – that is, Spanish Jews who had been forced to convert to Christianity.

Escaping persecution in the sixteenth century, his ancestors had settled in London’s East End.

At the age of thirteen, Daniel Mendoza left school to work for a tea dealer. During this period he discovered his talent for fighting. A porter had insulted his employer and Mendoza challenged him to a fist fight, which he won. He decided to become a professional prize fighter.

Daniel Mendoza’s first recorded prize fight was in 1790. He knocked out Harry the Coalheaver in 40 rounds.

However, it wasn’t just his many subsequent victories that delighted the crowds, but his development of a new, more defensive style of boxing which added excitement.

Books About Jews in Boxing

Mendoza was a strong fighter despite a height of 5’7” and weighing only eleven stone. He was often lighter than his opponents and therefore developed this defensive technique arguably out of necessity. His technique became known as ‘scientific boxing’ because of his sidestepping, guarding and straight left innovations.

Mendoza introduced flair and intelligence into what had been merely a violent battle of brute force and staying power.

Daniel Mendoza's fame gave a boost to the Jewish population of England at a time when Jews were restricted in their movements and generally demeaned. Mendoza himself was proud of his origins and billed himself as “Mendoza the Jew”. 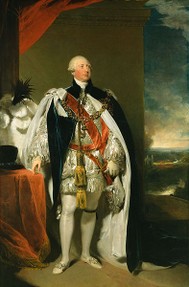 He was admired and patronised by the Prince of Wales. When he met George III, Mendoza was the first Jew in England to have done so and this event was a great morale booster for English Jewry.

Mendoza was the darling of the masses. In 1789 the newspapers reported on one of his bouts rather than break the news of the French Revolution.

Cartoons were drawn and ballads composed about his exploits, and commemorative medals were struck in his honour.

1787 was his first professional fight. He won and  received the patronage of the Prince of Wales.

1791 Mendoza laid claim to the English boxing title  after the retirement of the then champion, Benjamin Brain.

1794 Warr met with Mendoza again. Mendoza was  victorious in a mere 15 minutes.

1795 Mendoza fought ‘Gentleman’ John Jackson for the  Championship. Jackson won in nine rounds by grabbing Mendoza’s long hair   in one hand and pummelling his head with the other.

Since then most boxers  have worn their hair short!

After 1795 Mendoza virtually retired from the ring, turning his hand to various enterprises. Amongst them were appearances in pantomime, opening a boxing academy, teaching his boxing technique and becoming a pub landlord of The Admiral Nelson in Whitechapel. 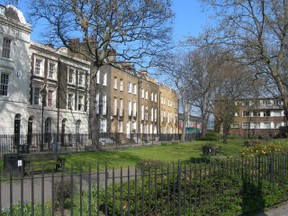 In 1808 he wrote his Memoirs whilst living at Paradise Row in Bethnal Green (left).  A blue plaque is erected there in his memory.

In 2011 his book, Memoirs,  was published in its entirety for the first time since it was first published in 1816.

The year 1820 was Daniel Mendoza’s last public appearance. In a grudge match against Tom Owen he lost after 12 rounds.

Despite his fame and a substantial fortune, Daniel Mendoza died penniless at the age of 70. He left a wife and eleven children. This charismatic and innovative sportsman was inaugurated into the Boxing Hall of Fame in 1954.

One of Daniel Mendoza's ancestors is Peter Sellers. In the Pink Panther films, on the walls of Inspector Clouseau’s office, there are prints showing Daniel Mendoza, Jewish Boxing Champion. 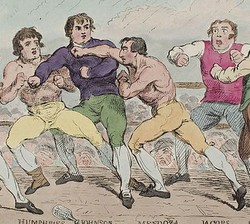 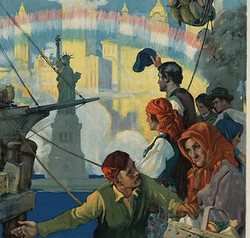 In the 1890s, Jews fled Russian areas of Eastern Europe, settling in New York's East Side. They spoke Yiddish, a vibrant language which they fought to keep alive. Did they succeed?
100%  6   10 KathleenDuffy
Football