A boxed set of six discs holding the complete Darling Buds of May series. A "perfik" gift at a "perfick" price

The Larkin's at Amazon

The Darling Buds of May was a popular UK TV series set in an idyllic time and place. It is based loosely on a series of books by author H E Bates.

The television series is a light hearted drama which borders on comedy. The comedy is helped along by David Jason who plays the lead role of Pop Larkin. Pam Ferris who plays his wife, like Jason, has  professional feet in both camps, that is drama and comedy.

The scene is 1950s Kent in a time of innocence. As someone raised in Yorkshire, England in the fifties I know all too well that even then there were problems. However when you look back through rose coloured glasses you see a world similar to the one the Larkin's inhabited.

Catherine Zeta Jones plays one of the Larkins young daughters. For her it was an early role which would lead to more theatrical success.

Although The Darling Buds of May is a series each episode can be watched as a stand alone piece without too much trouble. The series is true family viweing with not one thing nor word that could cause offence.

The boxed set is rated PG in the UK for parental guidance but is harmless as far as I am concerned. This set is the Complete 20th Anniversary Collection. It holds all of the TV series episodes on six DVDs. 11 episodes in all plus a special features section. As each episode ran originally for an hour, including commercial breaks, this offers hours of entertainment.

Episode one of the TV series is based on the first H E Bates Darling Buds of May book. It was written and set in 1958. In many ways it feels slightly earlier. The series is one though that does not conform to time scales. By the time the series ends the children are grown but there is evidence that it is still the fifties.

Filmed and originally aired in the early nineties it already has its own nostalgic feel. The Darling Buds of May relies heavily on its characters which mainly are the various members of the Larkin family. The story lines are gentle and often amusing. The country life which the Larkin's enjoy appears to be one of breaking the rules and prospering. It is not done as rogues though. Rather as wiley likeable entrepreneurs.

If you are still looking for a "perfick" gift for a loved one perhaps this boxed set will fit the bill. I purchased it for around £12, from Asda, for the boxed set which represents great value.

One of my favorites!

Like My Hubby does :) I bought it for him for Christmas

One of my fave DVD sets. Love Pop Larkin!

Hi again, Welcome to Wizzley! Will be watching for your articles... 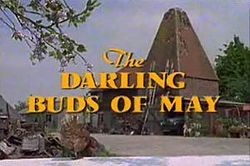 It's one of Ireland's best comedies, smashing all records in Britain too. Now Mrs Brown's Boys is en route to America, and the cussing will not be beeped.
62%  18   3 JoHarrington
Sitcoms & Comedies