When the script called for a large extended family, Brendan O'Carroll cast a real world one - his own! Yet the relationships aren't quite what they are in 'Mrs Brown's Boys'.

'Mrs Brown's Boys' is a sitcom set in Dublin. The indomitable (and hilarious) Agnes Brown is a great Irish matriarch, fussing around her brood of adult children. Their partners, grandchildren, neighbors and friends are also popping around for a visit too.

The easy-going atmosphere allows for bloopers to remain on show, and the fourth wall to frequently come down. If the cast seem comfortable with each other, there's a reason for that. They're mostly friends and relatives in real life too!

Learn more about the real man behind the cream cardigan and elasticated tan tights, in this authorised biography of Brendan O'Carroll

Check out the full range of Mrs Brown's Boys DVDs on Amazon (UK).

He came up with the idea, wrote the script and plays the lead matriarch. She's apparently semi-based on his own mother.

Author, playwright, stand up comedian and milkman, Brendan O'Carroll was sitting with his agent and manager Rory Cowan.  They were at the RTE studios - the biggest television and radio network in Ireland - when it was mentioned that the company were looking for short plays.

"I've written some five minute comedy plays."  Brendan piped up.  He hadn't, but he recognized an opportunity when he saw one.  All attention on him, he made stuff up, speaking as quickly as he was thinking it.  "They're about a Mammy in Dublin with a big family."  He was thinking of his own mother, who'd raised eleven kids.  "She speaks her mind, but gets it wrong a lot."

Rory looked at him.  He knew nothing about this.  But he wouldn't.  Brendan was making it up as he went along.

"One of the sons is based on Rory."  They all knew what he meant.  Flamboyantly camp. "But Mammy hasn't even worked out that he's gay.  Funny stuff."

Brendan got the gig.  He had to rush home and quickly write ten five-minute radio plays.  They were so successful that they turned into stage performances, with the venues getting bigger and bigger, then spilling out of Ireland to tour the world.

At one stage show in Britain, a scout for the BBC was watching from the audience.  Stephen McCrum approached Brendan afterwards to see if he'd be up for turning the play into a television sitcom. Brendan thought it was some kind of practical joke.

But it wasn't and now the award-winning Mrs Brown's Boys is into its third season.  It's slowly taking over the world.

Yet twenty years through various incarnations, Brendan hasn't built his Agnes Brown brand alone.  He took his whole family with him!  Here's a look at who shares the screen with him; and how they're related in real life.

In the show, Cathy is the middle-aged, long-suffering daughter of Mrs Brown. She really wants to meet a nice man and get married, but Agnes thwarts every attempt.

The only girl amongst a brood of boys, Cathy is treated with utter disdain by her mother.  But she isn't cowed. She gives as good as she gets.

As well she might.  In real life, actress Jennifer Gibney is the wife of Brendan O'Carroll!

Winnie McGoogan is Agnes's frequent clueless next door neighbor and best friend.  Naive to the point of idiocy, she's usually Agnes's partner in crime during all of their well-intentioned scrapes.

Their respective daughters are much more with the plot.  Sharon McGoogan is generally seen serving behind the bar at the Foley, or having a good, old chinwag with her best friend, Cathy Brown.

In the show, Maria is Agnes's daughter-in-law.  She's married to Dermot and has just given birth to triplets.  Meanwhile Agnes's favorite son is the priest, Trevor Brown.

He's not in it much, always away on missionary work.  That's largely because the 'actor' who plays him is actually more comfortable behind the camera.  Martin Delany is a director.

In real life, he's married to Fiona O'Carroll, who is Brendan's daughter.  She's from his first marriage, so Jennifer isn't her mother. Incidentally, Fiona O'Carroll is pregnant in real life (seven months, in June 2014). The way this is playing out, that possibly means the show will be getting another cast member soon!

If there is petty crime occurring anywhere in the Dublin area, then there's a fair chance that Buster Brady is involved somewhere.  He's Dermot's best friend and the person most likely to lead him astray.

Much more respectable and down-to-earth is Betty, who is married to Mrs Brown's eldest son, Mark.

Except in real life, Buster and Betty are married to each other.  Danny O'Carroll, who pays Buster, is Brendan's son.  His wife is Amanda Woods, who plays Betty.

Some of the most heart-warming scenes in Mrs Brown's Boys concern the interaction between Bono and his Granny Agnes.  Did I say granny?   I meant Grandad!

Bono is played by Jamie O'Carroll, the son of Danny (Buster) and Amanda (Betty).  In the show, he's the son of Mark and Betty, so at least he has the same mother on and off screen!

Meanwhile Danny O'Carroll's best friend in real life is Paddy Houlihan.  Therefore he was a natural to be cast as Buster's best friend, and Agnes's son, Dermot.

Brendan O'Carroll didn't just bring his family on board, but his real life friends too.

He's known Dermot O'Neill, who plays Grandad Brown, for over twenty years.  They've acted together in previous shows too.   The pair are mates from way, way back.

In similar circumstances, Brendan met the young Gary Hollywood, who plays Dino Doyle.  As a child and teenage actor, Gary had achieved some fame in his native Scotland.  He acted in one play with Brendan, but the older man became his mentor.

When the opportunity came to act in Mrs Brown's Boys, Gary's agent advised against it.  He's neither camp nor gay (in reality, he's married to a woman and they have two children), so the agent thought it would damage his career. Moreover, it was thought that the sitcom would be a flop.

Gary voted with his old friend and mentor.  He took the part of Dino against all advice and now he's world famous.

But funniest of all is what happened with Pat and Rory.

How Rory Came to Play Himself

Rory was originally Mark. But then the real Rory was press-ganged into playing a character based on himself. 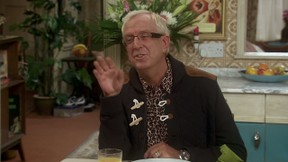 Pat 'Pepsi' Shields is a singer and musician, who was originally asked to contribute to the Agnes Brown radio play.  He ended up acting in it.

We know him best as Mark Brown, the eldest of Mrs Brown's boys.  But he started off playing Rory.

That must have been a little strange, as the real Rory was right there, as Brendan O'Carroll's agent and now road manager.  It meant that Pepsi had plenty of inspiration for mannerisms and the like, but also that he had to take some care.

As time went on, Pepsi moved over to playing Mark and a succession of actors took on the role of Rory.  The real Rory went on watching.

Then came the moment when one of the Rory actors left at short notice.  Brendan had just two days to do a casting call, find a Rory, rehearse and teach him the lines, then they would be live on stage.  It was impossible, so Brendan didn't try.

His old friend was not convinced.  "I'm not an actor!"

"But you know how to be Rory.  You've been Rory all your life."

There really was no response to a statement like that.  Brendan got another friend into his cast and Rory Cowan went on playing 'himself', even when they moved into television.

Long before the television show 'Mrs Brown's Boys' was even a dream, the Agnes Brown plays were turned into novel form.

Articles about Ireland and the Irish on Wizzley

Féar Gortha: The Irish Hungry Grass
Are there Hungry Fields in Ireland waiting to trap unwary walkers? And if so, what ghosts lurk within? True Irish hauntings as recounted to me.

Why St Patrick's Day is More American Than Irish
Everyone the world over associates St Patrick's Day with Ireland. But the parties, parades and celebrations began in the USA with Irish-Americans longing for home.

Celtic Christmas Decorations: Ireland
Do you or your ancestors hail from the Emerald Isle? Then add a little nod to your Celtic heritage on your Christmas tree this year. Check out these Irish Yule ornaments.
Updated: 08/22/2014, JoHarrington
Thank you! Would you like to post a comment now?
12

All the details are brilliant in this post and I am so happy to see this post.
http://www.delhiescortsgirl.com/

I really happy to read your more interesting article,

Thanks for providing recent updates regarding the concern, I look forward to reading more.

I really enjoyed reading your article. I found this as an informative and interesting post, so I think it is very useful and knowledgeable. I would like to thank you for the effort you have made in writing this article.
http://www.dwarkaescorts.com/

There are so many great and very interesting information on this post.
http://www.delhiescortsangle.com/

Thanks for sharing here I am very happy to read your review.I hope you give a useful topic for everyone.visit my website for the article is very interesting to read.
http://www.dwarkaescorts.com/

Valuable info. Lucky me I found your website by accident. I bookmarked it. This article is genuinely good and I have learned lot of things from it concerning blogging. thanks.

Thank you for your post, I look for such article along time. myself very happy to read it because it can give me more insight,thanks.
http://www.escortsouthdelhi.com/

It's one of Ireland's best comedies, smashing all records in Britain too. Now Mrs Brown's Boys is en route to America, and the cussing will not be beeped.
64%  18   3 JoHarrington
Sitcoms & Comedies