It's one of Ireland's best comedies, smashing all records in Britain too. Now Mrs Brown's Boys is en route to America, and the cussing will not be beeped.

Much is made of the 'special relationship' between Britain and the USA. That can sometimes have unexpected consequences.

For soldiers and naval personnel, serving side by side in war-zones, the tension has to be broken somehow. Britons took to packing DVDs of 'Mrs Brown's Boys'. Their US counterparts chilled out with them, watching the sitcom and cracking up laughing right alongside.

But what's fine for Irish, Brits and hardened military was deemed too strong for American audiences. Until now.

It's not really cussing in Ireland. But it is in the USA. That's why Americans haven't been able to enjoy the ratings smashing sitcom before now. 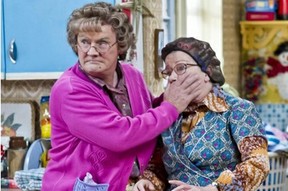 The problem was the swearing. 'Fecking' is practically punctuation in some parts of Dublin, and Agnes Brown lives right there.

As the matriarch of an hilariously functional family, it's generally Mrs Brown who is the source of all chaos.

She has a heart of gold. Even standing in the epicenter of trouble, she's usually only got herself into that position while trying to help.

Willfully naive, Mrs Brown only sees what she wants to see. When her sprawling family, and extensive network of friends and neighbors, force her to confront an unforeseen reality, then the expletives fly.

Nothing too strong. After all, she is the fairly upstanding mother of a decent working class family. She says nothing that real world Irish mothers - from the same background - don't say every day. Brendan O'Carroll based her on his own mother.

Unfortunately such dialogue is against the rules of all major US network channels. Hence she hasn't been seen by Americans, outside of the army and naval bases.

UK Imports of Mrs Brown's Boys on DVD and Blu-Ray

Until now, watching imported Region 2 collections was the only way that American audiences could enjoy the show.

Brendan O'Carroll Refused to Sell a Toned Down Mrs Brown

Television bosses in the USA have been desperate to grab Mrs Brown's Boys for syndication on their networks.

For the past two years, a succession of US television networks have tried to get the show.

They've noted that even the Russians are after the wildly successful comedy, despite the fact that Mrs Brown has an openly gay son. (Brendan O'Carroll wouldn't censor Rory out of the show either.)

TV scouts have practically used the US military as a litmus test of how it would do in the States.

Each time, the results have come in indicating pure dollar profits and a new favorite sitcom for American audiences. Every single network has approached Brendan O'Carroll with the same proposal - sell us the show and let us cut the cussing - and he's answered with a resounding 'no'.

The issue is that US television networks are bound by a law concerning expletives. Even the mild ones have to be beeped out.

Given the propensity of Mrs Brown to add a fecking or a feck off to every other sentence, that's a lot of beeping. Brendan O'Carroll (who both writes the show and stars as Agnes Brown) wasn't prepared to do that to her.

It would break the realism for a start. Something which Mrs Brown's Boys would never do. *giggle*

(For the benefit of US readers, Mrs Brown's Boys breaks the fourth wall so often, it's barely ever up.)

Mrs Brown has Trouble with her Christmas Tree

Please note there is strong language in this hilarious clip from 'Mrs Brown's Boys'.

Agnes Brown WILL Go to the States!

A solution has been found which will allow American viewers to enjoy 'Mrs Brown's Boys' in all its fecking glory. 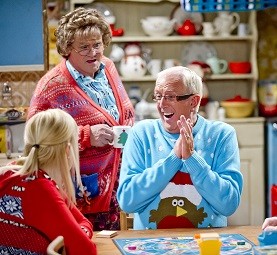 Rory Cowan has announced that Mrs Brown's Boys will be shown in the USA.

He's a great source for solid information. As O'Carroll's agent, he was sitting right alongside Brendan when the show was conceived. The character of Rory was first based upon him, then he ended up actually playing the role!

Rory is also one of Brendan's closest friends. But it was in his capacity as agent, that the announcement was made.

HBO and PBS are both aggressively pursuing the rights to air the show - swearing and all.

Cable television channels in the US aren't constricted by the same law for beeping expletives. Where it's only done as a matter of courtesy in their shows. Hence cable bosses have been able to bid for Mrs Brown's Boys without a caveat to censor it.

Now Brendan O'Carroll is interested in talking. Now the comedy is set to go to the USA.

Rory is convinced that Mrs Brown's Boys will be a hit in the States. He told the Press Association, "I know all the US army bases get the DVDs - I don't know where they get them. We are getting fan mail from all the army bases all over America. And they get them free - they're being sent from somewhere."

In addition to the cable companies, Brendan is also talking to Netflix. As an entertainment channel based in cyber-space, it also side-steps US laws on unbeeped cussing.

NB These will not work on ordinary US DVD players. You will need to alter your settings or find another player in order to enjoy them.

It must be so much fun to see the show live. I haven't had the pleasure of that yet. :( Enjoy the visit!

Growing up with a Scottish mother and now being married to an Englishman I can so relate to this show. This is without a doubt my favorite comedy show and I so hope this comes to the states. Going to England in April for Easter and thankfully will be seeing the stage show in Manchester. I am so excited. I love all the characters and get the best belly laughs from this show.

My parents have seen the Mrs Brown's Boys movie and recommended it to me. I guess I know what I'll be watching shortly.

I love Mrs. Browns boys, and can NOT wait to watch here in the states..the way I see it is if someone has a problem with it then don't watch it..but its a very funny show. Every time I watch it I laugh till I have tears

Me too. It just wouldn't work without all of the 'fecking'.

I'm glad that it won't be censored in the U.S.

You'll get the chance soon, if Rory and Brendan are able to strike a deal with the three companies able to air 'Mrs Brown's Boys' in its entirety!

Yeah, I watch BBC America and have never seen this. What a shame cause it looks hilarious.

When the script called for a large extended family, Brendan O'Carroll cast a real world one - his own! Yet the relationships aren't quite what they are in 'Mrs Brown's Boys'.
62%  18   3 JoHarrington
Sitcoms & Comedies