Did I Miss All the News After a Hurricane?

What is your hurricane experience?

Depending on your age hearing the words, "There is a hurricane watch in effect for..." will result in different reactions. Parents call children, regardless of the childrens ages, and make them come home. Young people without committments practice their gentle refusal speech and go to the store for hurricane party supplies. Working people in certain occupations groan and try to get out of work because some professions require workers to stay on the job for the duration or longer of a hurricane.

You didn't know some people have to remain on the job during a hurricane? Most people do not think about who is 'minding the store' so to speak and certainly the news does not cover this aspect unless an evacuation is called. For example the news may state that a nursing home or an assisted living was evacuated. Of course the people working in these places have to stay put. A lot of times when a hurricane is coming, especially if hurricanes are the norm rather than the exception, the workers come and go like normal right up to the last minute. Then the phone starts to ring when the next shift is unable to get into work. Whoever is left on shift is there until the roads open again.

Home health workers are always the last ones out and first ones in during a hurricane. Because there is a thirty-six hour window before the storm, patients have to be prepared and their nurses are the ones fixing their disaster kits.

Workers for hospitals of course stay put during any disaster and a hurricane is no exception. Have you ever wondered what happens if a hospital closer to the ocean is evacuated? Those patient's cannot travel far, if they could their physicians would have dischared them during the watch. So they have to go to the nearest hospital that is out of the way of the hurricane. That puts a heavier workload on the crew that is left on duty. If they are lucky a lot of the staff from the evacuated hospital come with their patients. However, a lot of times the hospitals limit the number of workers because having a crew of workers who are unfamiliar with the hospital ends up being morestressful and dangerous than increasing the workload of the exisiting staff.

What is the difference of news broadcasts after a hurricane?

Is it because when you are living in the path of a storm your power is off for days and you cannot hear the news? Is it because once you are away from an area regularly hit by hurricanes you hear all the news and wonder why it is such a big deal? Is it because what you hear on the news does not reflect the reality of hurricane aftermath?

Probably all of that and more. If you live in the path of storms and they come on a regular basis you know what to do in preparation and you know what the aftermath will entail. It is expected that neighbors will help one another with the cleanup, clearing of the brush and fallen limbs, BBQ-ing of the food out of the freezer before it goes bad, sharing generator power, babysitting at each others pool to let the kids cool off and any of the other things that come up.

Even before the power comes on people go back to work. Many use the restroom for their ablutions and everyone relates their hurricane stories. It is a way to work through the scare that comes with the territory of a hurricane, regardless how many you live through.

Living away from the storms path and watching the news broadcasts after a hurricane was strange. Talk of what one could claim on insurance was surprising!

When we lived on the Gulf Coast what the insurance would not do came to us after one of the Gulf Coast Hurricanes took out trees in the yard and caused leaks in the house. There were so many claims after that storm the homeowners insurance refused to pay! They said there were too many claims and they would go bankrupt if they paid it all out. It was right after that storm that homeowners below HWY 98 were told they could no longer buy insurance at all! Unfortunately, that came after many farmers sold their land and the new housing developments had just begun work. The fields where strawberries and potatoes had been were now razed, poles at regular intervals and that is the way it remained. Without insurance, the strain on an already poor housing economy was too muh to bear.

So hearing one could claim loss of trees was a shock. Our trees were Stewart Pecan trees and we couldn't claim them at all. Of course, after Katrina the word was the insurance company would not pay because it was damage due to flood, not hurricane damage. What is not as well known is this was used as an excuse not to pay as far east as Baldwin County, Alabama!

Being fifteen hunded miles away from hurricane reality is a relief but it remains something to be watched carefully. Especially when a son and his family remain there. Watching the news of all storms is something that comes natural. The best thing is now the power won't go out!

I was so scared that first storm summer of 1995...I was working at a nursing home in Bay Minette and there was no way I could leave so I made the two kids and hubby come to me! Which of course turned into a huge sleep over as more and more families showed up...it all turned out well though and the southerners were so gracious...I can say that as I am one even if my heart home is the desert :)

Hurricanes are heat engines, and the fuel is water. This is a simplified explanation of hurricanes that should be understandable by all.
79%  12   6 CruiseReady
Hurricanes 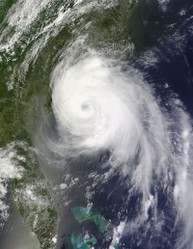 The 2017 Atlantic Basin Hurricane Season arrives on June 1. What tropical activity will this year bring? Predictions from five sources; Names that will be used .
Loading ...
Error!