Peter Capaldi's first full season as the travelling timelord starts on Saturday 23 August 2014 when Doctor Who returns to BBC One.

How will modern Doctor Who fans react to an older Doctor? We are about to find out as Peter Capaldi, roughly the same age as the original Doctor William Hartnell, starts his first full season on Saturday 23 August 2014. Joined by companion Clara Oswald (played by Jenna Coleman), he is set to face daleks, cybermen and Clara's boyfriend.

Peter Capaldi is due to start his first full season as the Doctor when Doctor Who returns to BBC One on Saturday 23 August 2014. He is the twelfth of the main actors to play the time lord and marks a return to the show’s origins, being almost exactly the same age as the first Doctor William Hartnell when he started in the role back in 1963.

But being the joint oldest Doctor has not phased Capaldi. “I filmed a sequence in which I was suspended on wires, 20 feet in the air for a whole day, and people kept worrying about me and saying, ‘Are you OK? Are you alright?’,” said Capaldi. “But it was fantastic. It was like being nine years old. To be carted up into the air on wires to pretend to fly. Where else is a man of my age going to be attached to wires and flung around a room? I think being on the wires is great fun.”

And he has an exciting first season with which to look forward as the Doctor comes to face with old foes the daleks and cybermen. Also returning is current assistant Clara Oswald, played by Jenna Coleman.

“Jenna has been absolutely brilliant,” said Capaldi. “I think she’s wonderful in the show, and she’s my favourite companion. She’s been so welcoming to me and so warm. I couldn’t have wished for anyone better to welcome me to the show. She’s just been delightful to work with, so I hope we can carry on doing that.”

The feeling was mutual, as Coleman said about working with Capaldi: “It’s been a joy. He’s so funny and so generous. He was looking after me on his first day, which is testament to the type of man he is. He is the epitome of grace.”

The new season will last twelve episodes before a short break and then the Christmas special. This will please many fans who have been upset at the disjointed nature of recent series with annoying and long mid-season breaks.

The opening episode “Deep Breath” sees the return of Vastra, Jenny and Strax, and a dinosaur in London. The second episode tells you which enemy to expect in the title “Into the Dalek”. But this dalek appears to be good and the Doctor and Clara shrink down to explore the creature’s insides. The episode introduces Danny Pink, played by Emmerdale’s Samuel Anderson, who may end up romantically linked with Clara.

“Robot of Sherwood” takes the Doctor to the famous forest and a meeting with the legendary Robin Hood, played by Tom Riley. But all is not what it seems, and Nottingham is in danger. In “Listen”, the Doctor and Clara are haunted by ghosts from the past and the future.

Ashes to Ashes star Keeley Hawes plays alien Mrs Delphox in “Time Heist” as the Doctor tries to rob a bank. The character in the title role of “The Caretaker” arrives at Clara’s school with devastating consequences, not least of which is the Doctor meeting Danny Pink.

In “Kill the Moon”, a shuttle crash lands on the Moon where lie corpses and strange creatures, and Clara begins to doubt the Doctor. “Mummy on the Orient Express” is what you see on the can, and could spell the end to the Doctor and Clara’s relationship.

Now separated from the Doctor, Clara has to battle an enemy from another dimension in “Flatline”. “In the Forest of the Night”, London is attacked by trees.

The season ends with the two-parter “Dark Water” and “Death in Heaven” and sees the appearance of Michelle Gomez as the Gatekeeper of the Nethersphere. “Well of course Peter Capaldi is our next Doctor, which makes complete sense,” said Gomez. “I'm thrilled to join him. Well, you would be wouldn't you?”

Other guest stars in this season include Frank Skinner, Hermione Norris and Ben Miller.

Team behind the new series

Stephe Moffat has written four episodes – “Deep Breath”, “Listen”, “Dark Water” and “Death in Heaven” – and co-written three – “Into the Dalek” with Phil Ford, “Time Heist” with Stephen Thompson and “The Caretaker” with Gareth Roberts. Jamie Mathieson wrote “Mummy on the Orient Express” and “Flatline”. Mark Gatiss wrote “Robot of Sherwood”, Peter Harness wrote “Kill the Moon” and Frank Cottrell Boyce wrote “In the Forest of the Night”.

Doctor Who Extra on IPlayer

This season’s Doctor Who Extra, the behind the scenes look at each episode, will only be available on BBC IPlayer. As well as showing how the episode is made, it will investigate the historical links with older episodes. Each of the twelve episodes will last ten minutes.

SteveRogerson, Thank you for practical information, pretty pictures and product lines.
Do any of the previous Doctors show up, either as Doctors or in other roles, in the reigning Doctor's episodes? If so, has Peter Capaldi appeared in the current episodes with Jodie Whittaker? 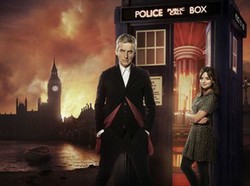 A look back at the career of Peter Capaldi, named as the twelfth of the main actors to play the lead role in Doctor Who.
31%  1   4 SteveRogerson
British TV