In 1996, a Sarasota, Florida businessman declared September 22 Elephant Appreciation Day. It's a day to remember these amazing animals and the danger they are in.

I love elephants. I’ve never really met one in person, other than at a zoo as a child, but I’m fascinated by pictures and stories of them. I feel some sort of kinship with them that has nothing to do with my size.
Elephants are amazing creatures. They bond to their families, and mourn their separation or death. They protect their young, and the young of others. They have a sense of humor and an amazing memory. Yet they are being killed by the hundreds.

I discovered a web site that taught me a lot about elephants.The David Sheldrick Wildlife Trust is committed to saving orphan elephants and black rhinos and releasing them back into the wild. That is only part of what they do. They are active in conservation, education and outreach.

The story of Schmetty both filled me with wonder and then sadness. She was the first baby elephant that was successfully raised on a formula. Baby elephants nurse for two years and their milk is very different from cow’s milk. In 1974 Dr. Dame Daphne Sheldrick discovered that the addition of coconut oil was the secret to  keeping baby elephants alive. She had tried to raise many, only to watch them weaken and die. Schmetty was the first one to thrive.

But Schmetty taught her another lesson. Elephants bond to their family and grieve when they are separated. Schmetty died in her arms after Daphne returned from a trip to attend her daughter’s wedding. From then on, the babies were attended by a rotating staff of caretakers. They had plenty of affection and love, with caretakers even sleeping with them, but it would not be the same person all the time. Gradually, the youngsters were allowed to mix with the adults, including the wild elephants. When the time was right, the wild adults would take the orphans and they would become members of an elephant family. They did return periodically to visit. In fact, they somehow knew when a new baby was being brought in and would congregate at the orphanage to greet it.

The Elephant Sanctuary, on 2700 acres in Hohenwald,Tennessee, is dedicated to the elephants who were confined in inadequate pens in zoos or made to perform in circuses sometimes by cruel methods. Elephants travel 30-50 miles a day in the wild in family groups. These rescued animals were often confined to small enclosures or chained with little interaction with other elephants. In this sanctuary, they are allowed to roam in groups as they would in the wild.

There is no planned agenda for Elephant Day, but I think we should all remember the crisis elephants are in right now. It saddens me to think that such a large and intelligent animal is so vulnerable. There was an attack in Southern Africa recently by helicopter that took the lives of 22 animals. I can’t even imagine the horror of it. In March of 2012 NBC news reported that about half of the elephants living in Camaroon Park had been slaughtered and as many as 200 elephants have been killed since January by poachers.

The ivory ban of 1989 was credited with saving the elephant from extinction, but lately wildlife parks have begun to look like war zones with soldiers helping understaffed park rangers prevent poaching. Much of the problem is blamed on China’s middle class who can now afford to buy the ivory.

On September 11, 2011, News24 reported that poachers were using poison in watering holes to kill elephants along with other animals. Authorities fear that local residents could be endangered by these practices as well.

In addition to poaching, there is loss of habitat and conflict with farmers that is reducing the elephant population. It will take more than a handful of dedicated people to change things for the elephants.

What Can We Do?

It's a helpless feeling when you think you can't do anything to help a wonderful animal like the elephant. Some of us don't have money to donate and certainly can't go to Africa to try to save the elephants.

The only thing some of us can do is to try to raise awareness, educate, raise money, or donate to a sanctuary. The Sheldrick Wildlife Trust has a wonderful fostering program that only asks $50 a year to support an orphan. If you have the money, please take a look at it or any of the other deserving orphanages or sanctuaries.

Thanks zteve and Tolovaj. Yes, we should remember the peril these wonderful creatures are in. Such a waste. But it's good to remember the ones that have found refuge too.

I love elephants and this is a great page with interesting and informative information. Great job!

I didn't know elephants have their day. They certainly deserve it. They symbolize many things we shouldn't do to nature. If we need the reminder, maybe a reminder in size of an elephant - they are just perfect for the job!

Elephants really are special animals! I'm happy to celebrate their appreciation day. It's sad to learn of their plight.

I didn't know it was the raised trunk ones that were good luck! Good to know! The day is a pretty well-kept secret. Time to spread the word! Thanks.

This is so good to know, my friend Maxine will be impressed that I know this. She is a big fan of Elephants, collects them but only those with the trunks up, she says it's good luck... Thanks for the heads up on Elephant appreciation day, I'll drop her a special gift that day, elephant related no less. :)K 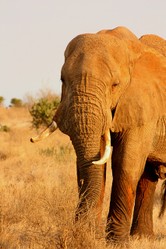 Why are elephant’s endangered species?It is because we are destroying green cover, their habitats with rapid urbanization and industrialization and poaching being another menace.
81%  10   7 MBC
Elephants

Learn about the wild creature the elephant. We will discuss the endangered, majestic and exotic elephants of the world.
Loading ...
Error!