Elton John was one of my favorite musicians while I was growing up and still is! The music that Elton John has written moves me in a way that is hard for me to describe.

The Music Of Sir Elton John

I love Elton John's music for many reasons. One reason is that when I hear his music, It shoots me back into my childhood, and I'm right back in the 70's again. The 70's were a time when bell bottom jeans and the phrase "Dynomite" was commonly used from the show Good Times (remember that?).

Elton is an accomplished pianist, singer and composer but there is something more in his music that I have a hard time explaining. The music and the lyrics in his songs just strike a cord with me. Every time I hear an Elton John song, it moves me deep in my soul.  A good example is "Your Song", every time I hear it I get tears in my eyes and I get a little emotional. The lyrics are so beautiful. As any Elton John fan knows he had a song writing partner named Bernie Taupin and together they wrote hit after hit. When they worked together it was magic and that resulted in the wonderful music that came with each decade.

Elton John has had a long and fantastic musical career spaning over the last 40 years! He was inducted into the Rock and Roll hall of fame and has had over 30 albums. Now that is an accomplishment!

He started playing piano at the young age of 3. His father was a trumpet player so he had music in his family. He attended the Royal Acadamy Of Music on a scholarship at the age of 11.

As a teen he played piano as the house pianist in a local pub in his hometown in England, thanks to his mother and step father and his career started to take off from there. He started writing songs, formed a band called "Bluesology" and was exposed to many musical giants at a young age, including the awesome Patti Labelle! He eventually answered an ad in the paper and met Bernie Taupin. They teamed up and started writing songs together for a record company and peddled them to singers. Later in the late 60's the duo started to write more songs and came up with a couple of hits. First was a song called "Border Song" and then "Your Song" which catapulted Elton to the US top 10 hits.

Soon after that he made hit after hit with his writing partner Bernie and together they created music history!

Take a look at my Webpage about 70's classic rock!

70's Classic Rock Music Hits
If you loved my Elton John page, I would love to get your feedback on my 70's classic rock music hits page.

What are your favorite Elton John songs?

These are my favorite Elton John songs. I picked these because they are the ones that I listen to the most and I could never get tired of hearing them.

ilike the Blue eye track of Elton john... also i'm still standing is also one of his gud tracks... love to hear Elton when i find some liesure...

Elton John is mostly known by his ballades but for me his best song is I'm still standing. After all these years can still give me some boost in the early morning. No need for coffee here:)

Gotta love Elton John, he's so talented and had such a good vibe about him. Saw him in concert not too long ago, and he's quite the showman, loves to interact with the audience, and works that piano with a vengeance :-)

Elton is a great, wow he's done a lot of great songs...

Yup, I have the Yellow Brick Road album and grew up in the 70's listening to Elton John - Saturday Night (not sure if that's the true name) was a favorite song of mine! ;)

OMG Someone's still writing about Elton John! You've got my thumbs up!

A classic! Love Elton John's music. He's one of those who has been around for SO many years and is still incredible.

A classic! Love Elton John's music. He's one of those who has been around for SO many years and is still incredible.

I love Elton enjoyed this article 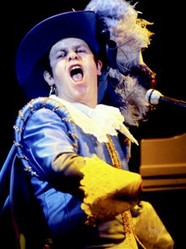