How to behave at and around the table when playing pool, billiards and snooker.

Many people love a game of pool down the pub, but too often such games can be ruined by a player not knowing the basic etiquette of the game. Here, Steve Rogerson provides some tips on how to behave when at the table so that all players can enjoy the game in a relaxed and, most importantly, sporting manner.

The games of pool, billiards and snooker are popular in pubs and clubs around the world with players having many hours of enjoyment whatever their standard of play, from the raw beginner to the potting wizards. Sadly, though, these games are also the source of many arguments and bad feeling, most of which can be avoided by following a few simple guidelines as regards etiquette.

Know the Rules of the Game

Unlike snooker, there are no standard rules of pool, and different countries – and different areas within countries – often have their own variations. Even bars within the same town can have differences in rules. So when visiting somewhere new, do not assume the rules will be the same.

A good tip is to watch other people in a bar playing a few games first and getting a feel of what rules they are playing. And there is nothing wrong in asking if a rule comes up during the game, but do it before playing the shot not after as that is where arguments can start.

Do Not Put Off the Opponent

When it is the opponent’s turn to play, move away from the table to allow the opponent to walk around it unhindered while he or she considers what shot to play. Do not talk to the opponent or ask questions when they are about to play their shot.

And never move around in their eyeline when they are down on the shot. Do not walk round the table while they are playing or try to look at what shot the opponent is attempting. Stay back and let the opponent play their shot without problems.

Do not cheer or make other celebratory gestures if the opponent plays a bad shot. This is unsporting conduct of the worst kind.

Always acknowledge with an apology or gesture if a shot is achieved by luck rather than by intention. Note too that in some rules, only intentional pots allow a player to continue on the table. Potting a ball by a fluke can mean that the visit passes to the opponent.

Do not take an unnecessarily long time between shots as this is disrespectful to the opponent and to those waiting to play. Never answer a mobile phone during a game. If leaving the table is essential, such as for a call of nature, then explain this to the opponent and apologise.

Never unscrew or put the cue away unless conceding the game. This can put off the opponent and in some rules unscrewing the cue means you have conceded. Wait until the opponent has finished shooting and hand shakes have been exchanged before putting away the cue.

When racking the balls, if a cloth is provided, use it as this protects the area of the table where the balls are racked. Whether there is a cloth or not, place the balls carefully in the triangle or diamond; do not slam them in as this can cause wear on the cloth.

Never toss a coin over the table as this can cause small tears in the cloth. Chalk the cue away from the table so as not to sprinkle chalk dust on the playing surface.

Never smoke over the table. Do not put drinks on the side of the table as they can be easily spilled onto the surface by a player or passer-by.

Players should always own up to their own fouls, even if nobody else notices a foul has been committed. Do not cheat by putting a mark on the table to help aim when making a shot, such as when getting out of a snooker.

Don’t display signs of anger when missing a shot or losing a game. Never slam the cue down on the table or elsewhere.

Games such as pool, snooker and billiards, while competitive, are also highly enjoyable. By following these basic rules of etiquette, that enjoyment can be improved for all players and spectators.

SteveRogerson, Thank you for product lines, pretty pictures and practical information.
In particular, I appreciate the manners that suggest a sport or an activity as something that should be part of our down-time in public places.

Where do the onlookers and participants keep their drinks, food and smokes? Which one of the games do you most prefer as an observer and as a participant? 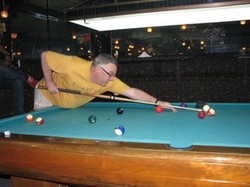 The dos and don'ts of surviving the annual office Christmas party.
100%  16   11 Ragtimelil
Other Cycling Types