Looking for a family game that will make family night great then here is one called BusyTown based on the characters developed by Richard Scarry.

Recently, the children –thanks to Netflix – have started to enjoy the fictional cartoon called Busy Town Mysteries. They also like ‘The Busy World of Richard Scarry’. These are cartoons based around the busy town books written by a great children’s author, Richard Scarry.

Both of these shows are wonderfully family friendly and the stories are quite captivating for little ones. If you have not seen them, you will definitely want to get every one of the seasons for your family or tune in on Netflix.

The Busy World of Richard Scarry

The Busy World of Richard Scarry came on the air a little under twenty years ago in 1994. Some of us watched it as children. There is something nostalgic about watching our kiddie programs with our own children. I love it when they love the things I loved.

The Busy World of Richard Scarry

To add to the Richard Scarry Range, there is a delightful game called BusyTown which has received quite a few awards. Two of which are the Oppenheim Toy Portfolio Platinum Award (High Praise indeed!) and it is also considered the ‘Parent’s Choice’.

It is a game that puts you and your children’s observational skills to the test as you ‘rush’ around Busy Town looking for clues and solving mysteries with items found all around the town (i.e game board). Some games are incredibly boring for parents as they play with their children but not this one, definitely not BusyTown

BusyTown: Eye Found it - The Game

With a game board that is longer than six foot, there is a ton of items to look for and discover. It promotes teamwork as well as you all win or lose together – So unusual in most games where there is one winner and the rest are losers.

The aim of the game is to all reach the Picnic Island before the pigs eat up all the food. An element of tension is introduced to the game as there is a timer. The tension and urgency can be a bit frustrating for a younger player around the lower end of 3 or below. To help impatient, visually underdeveloped younger players, you might want to use a kitchen timer and set it to give a little more time for the little one to find all they are looking for without frustration.

It is perfect for children and the young at heart from a late three upwards. Adults definitely find it very stimulating as well.

If for nothing else, you want this game because of the cooperative element. Teaching children that you are all in life together is an invaluable lesson that can be passed on with this game.

Another Family and Educational Game

Richard Scarry was a very talented guy. Though the game was not developed by him (as that would be scary!), it still is a pretty good game. I do love the idea of everyone winning and losing together and the girls love the TV programs.

Thanks for coming over!

I love cooperative games, and Richard Scary was one of my son's favorite authors when he was little. There is always so much to look at! We never did see the T.V. program -- just the books. I haven't seen the game either. Thanks for telling us about it!

Did you know that several rock bands, both old and new, now have their own Mo... 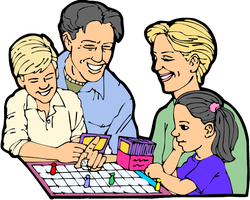 Review of our family's favorite strategy board games. "The family that plays together, stays together." These games make great gifts as well.
97%  8   13 SquidRich
Board Games

Did you know that several rock bands, both old and new, now have their own Monopoly board game? Enjoy playing the world's favorite game with many of rock's most successful groups.
Loading ...
Error!