Julia Ormond stars as Smilla Jasperson, an expert on snow, in the excellent 1997 film Smilla’s Sense of Snow as she plays detective to investigate the death of a little boy in her apartment block. And she finds that his death is related to an apparent meteorite crash more than 100 years earlier in Greenland.

A lot of the scenes were filmed on location in Greenland, and this was claimed to be the first time that a major movie had been shot there because of the incredible logistics problems. Other scenes were shot on location in Copenhagen.

The film was nominated for the Golden Berlin Bear award at the 1997 Berlin International Film Festival.

The story starts in 1859 in Greenland where a flaming object plummets from the sky into the snow creating an explosion that causes a tsunami style wave of snow that engulfs a lone Eskimo and his dog pack. Jump forward to present day Copenhagen, where a little boy has fallen to his death from the roof of an apartment block in what is believed to have been an accident. But Smilla Jasperson (played by Julia Ormond), who lived in the flat above the boy, is not convinced.

She grew up in Greenland and is an expert on snow. When she sees the boy’s tracks in the snow on the roof, she is convinced he was running away from something. She was also puzzled as to why there would be an autopsy if they really believed it to be an accident and even more puzzled when she discovers the autopsy was carried out by Professor Loyen (played by Tom Wilkinson), a leading scientist.

A little investigation leads her to Dr Lagermann (played by Jim Broadbent) who examined the boy when he first arrived at the hospital and found evidence that a muscle biopsy had already been taken after the boy had died. Lagermann was due to perform the autopsy himself but Loyen pulled rank on him.

She continues to push, and finds that the boy had been seeing Loyen once a month and that Loyen was known for writing a book about prehistoric parasitic worms. The boy’s mother was receiving regular payments from Greenland Mining, the company that the boy’s father worked for when he died on an expedition to Greenland.

Helped by her mysterious neighbour (played by Gabriel Byrne) and who’s name is never revealed, and a key given to her by ex-Greenland Mining employee Elsa Lübing (played by Vanessa Redgrave), she steals documents and tapes from the company’s archives and discovers there was an expedition thirty years previously in which people also died.

Her investigations start attracting the wrong sort of attention and any doubt she might have had that the threats she received were not serious are dispelled when a sound engineer she asks to clean up a tape left by the little boy is murdered.

She pulls some strings and gets a cleaning job on the boat taking the next expedition. On the boat, she breaks into the company’s laboratories and discovers that they are investigating the meteorite that crashed in 1859 and which they believe to be a source of energy that the company can exploit. The meteorite crash had brought back to life the prehistoric worms that had been frozen in the ice and it was these that had killed the other men and had infected the little boy.

In Greenland, the scientists have built an underground cavern where they are experimenting on the meteorite. Dr Andreas Tork (played by Richard Harris), the baddie and owner of Greenland Mining, tells her that it is not in fact a meteorite but is alive.

Why Smilla’s Sense of Snow is so Good

The joy of this film is the way Smilla’s investigations slowly peal away layer after layer of conspiracy and lies, in a style not that dissimilar from an X Files episode. The scenery is beautiful, in Copenhagen and especially in Greenland, and the acting unnoticeable allowing the viewer to be dragged into Smilla’s strange but determined world.

Yes, there are some action scenes, but this is more a slow burner than a fast-paced adventure. The plot is interrupted by flashbacks to Smilla’s relationship with the little boy, but this does not distract but rather reinforces the reasons why she is doing this, putting herself in danger. And it is a task that she never forgets, right down to the climatic final scene with Andreas Tork on the thin ice in Greenland.

SteveRogerson, Thank you for product lines, pretty pictures and practical information.
In particular, I appreciate being reminded of this film and the book upon which it was based. I like them both. The film company did a good job of matching how I imagined the characters looking in the book with how they ended up being presented physically in the movie version.

Many people -- perhaps as high as 99.9 percent recurring -- on this side of the pond say that they prefer the book to the film when asked about which they prefer. What would be your response? 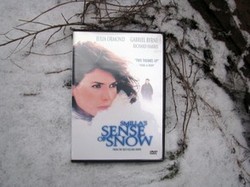 What is the best lesbian movie of all time? A look at ten strong contenders.
100%  14   9 JoHarrington
Science Fiction

Directed by Ridley Scott, Prometheus was one of the most widely anticipated films of 2012. An epic story, spanning galaxies, which raises more questions than it answers.
Loading ...
Error!