Fire Season by VH Folland is an aviation adventure published in 2010. This article contains the author's notes, research links, and supporting material

The story of a small airstrip caught in a raging forest fire, Fire Season is the debut novel of British author VH Folland. An old school adventure, Fire Season sets man against the forces of nature. A small town, a threatened community, and a forest fire closing in.

A story like this requires a lot of research, and this article covers some of the resources and research done while writing the book.

"...the story is a wonderful, amazing, read. This is a recommended read by me and I will be on the lookout for more."
Free Book Reviews

"suspense that will have you glued to your seats" BookPleasures

For Matt and his flying club, there aren't any options left. Trapped residents, threatened towns and one small airstrip safely upwind of the fire line. It's not a promising position, but they volunteer anyway, hoping a protected position and a base close to the fire might make a difference.

And then the wind changes.

Available from Amazon in Paperback or Kindle

Brooke's Vale itself is fictional. The country has been left unclear, although in earlier versions it was New Zealand.

I was surprised to find many people placing the story in Britain, specifically in England, because Britain does not use firefighting aircraft in the way described, or have the same out-of-control wildfires. When a large area of forest near me caught fire a year after Fire Season was written, the fire services ringed the edge of it with engines and turned the hoses on it. It was out within a day.

This did mean doing extensive research, because there are so many things that can trip authors up - especially in a topic you aren't entirely familiar with.

Have you ever been near a forest fire?

Can cropsprayers be used to fight forest fires?

The answer is yes and no. Surprisingly, cropsprayers tend to jump when the emergency drop is used, and don't always have the accuracy needed - the aim is to get the water off the aircraft, not place it presicely. When they emit a water as a spray, a large fire can evaporate the water droplets long before it hits the flames.

However, it has been done, usually in desperate situations. The same make of aircraft may be available in firefighting and cropspraying configurations. There is also an adaptor kit available for certain makes of cropsprayer that allows them to convert to firefighting aircraft.

A few interesting things came up during research. One pilot said the hardest thing to get used to in a cropsprayer was flying up if anything went wrong. Normally a pilot will try to lose height in an emergency but this can plant the aircraft nose down in the field and cause it to flip or tumble.

Strangely I did not encounter any who had nice things to say about birds...

Another problem was differing firefighting procedures in different countries, that meant I got contradictory answers to certain questions. One scene in the book was rewritten to set something on fire simply to resolve the issue: "If wood and on fire, apply water" appears to be universally agreed.

"The characters are rich and their interactions natural and unforced. I loved the multi-layered personalities each character brought forward." E & K Family Book Reviews

It's not easy to find somewhere that is prepared to let an author climb all over the inside of an aircraft that has been everything from wide patrol and early warning to a nuclear bomber. I was fortunate to find somewhere that possesses not one but two of these versatile aircraft and who had no problems with me scrambling around inside the cockpit.

Since this was a live aircraft, there was someone watching me at all times.

To give you an idea of the size of the Shackleton, I could walk clear under the wing, and they had a smaller aircraft parked under the wings of both to shelter it during restoration.

The video above shows a test run of all four engines on the aircraft I visited. Loud, isn't it?

The Shackleton MK III was used in the story, but there is one remaining flying Shackleton. WR963 is a MKI in Coventry, England, being restored by the Shackleton Preservation Society:

Other aircraft and notes

The Robin is the featured light aircraft in the story. Many people have asked why it was not a Cessna, the current most common aircraft to learn in in the US. There's a personal note on this: the first aircraft whose pilot seat I sat in was a Avions Pierre Robin, so in this case I wrote what I knew. I have a soft spot for the DR400.

Other research included a fascinating chat with a group of AN2 pilots, who were extremely proud of how slowly their aircraft could fly - or perhaps just realistic...

"...the ending had me, literally, sitting on the edge of my seat!" Ruth (Bristol, B7, The United Kingdom), Goodreads

What was your favourite aircraft in Fire Season?

A free short story, Arrival, set two years before Fire Season, is also available. Initially released on Twitter, it is now on Smashwords and was, for some time, the most downloaded story in its category until it was knocked off its place by a book about Justin Bieber.

You can download it or read it free from Smashwords.

"Thought provoking, emotional and compassionate, this is a book I could read again. A recommended read." Clover Hill Book Reviews

For over one hundred years, the small town of Brooke's Vale has been a sanctuary from forest fires. Unfortunately this year is different, when a rash of fire bugs, unseasonal winds, and the sheer scale of the fires leave the emergency services stretched beyond the limit.

For Matt, owner of the Brooke's Vale cropsprayer airstrip, and his flying club, accepting the unusual chance to fly fire prevention missions is simply being good neighbours. Deviating from his assigned fire prevention duties to try to stop a tragedy as it unfolds, the result leaves him devastated. Now the nearer towns are threatened and Brooke's Vale itself is at risk.

Jim, a transport pilot on leave, takes on the fire prevention flying to buy them time while Matt, grounded and in shock, is left to organise the community. With no power, no communications, one cropsprayer, thirty stranded residents and the fire closing in they'll have to find a miracle - or fly one.

Available from Amazon in Paperback or Kindle

"Fire Season captures the horror of a surging fire front and the bravery of small communities that face the terrifying threat." Shelleyrae at Book'd Out

I've tried to keep this short, as I could quite easily write several pages on one of the aircraft alone: I have binders full of notes and several pages of bookmarks still left from my original research. If there's anything you are curious about that this article doesn't resolve, please drop me a note in the comments or on my blog and I'll do my best to clear it up. 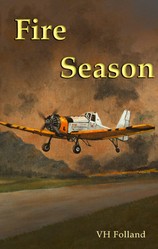