Pentamerone, or The Tale of Tales

Pentamerone is a popular name of the book originally titled The Tale of Tales (Lo cunto de li cunti), the first national collection of fairy tales ever.

Pentamerone is one of those books everybody should read at least twice yet most of the people will never hear of. It's officially the first written collection of national fairy tales, it presents several first or very early printed versions of the most popular fairy tales today and it is built on the plot which became one of the two major plots for all literary works. It is a masterwork of Giambattista Basile who died before it was published for the first time. Despite its importance Pentamerone or The Tale of Tales, as the author titled it, never became really known to the wide audience and now it's time to at least partly correct the injustice to this influential book.

Here are 10 amazing facts about Pentamerone to start with:

We'll never know who initiated each of the tales in Pentamerone, but it's indisputable they were collected, rewritten and edited by Giambattista Basile. He very likely read it to his fellow academicians and to the nobility in the courts where he served, yet never published them. This task was done only a few years after his death by his sister Adriana. She signed him as Gian Alesio Abbatutis, what is an anagram of his real name Giovan Battista Basile.

This pseudonym was not meant to hide the identity of the author who already signed with this name several other works while he was still alive, but rather to distinguish between his literary works in Italian and Neapolitan language.

The Title of the book was The Tale of Tales, or Entertainment for the Little Ones (Lo Cunto de li cunte, trattenemiento de li peccerille).

The edition in 1674 was first which used the title Il Pentamerone, suggesting similarities with its strongest influence Decameron by Boccaccio from the 14th century.

Boccaccio was actually inspiration for Basile because of the used language too, but this is a story for another occasion. By the way, there is another interesting article about Pentamerone right here:

The structure of the book is one of its signature attractions. It is designed with a so-called frame story about the princess Zoza, which is tricked by her slave. The slave occupies her position in society, soon becomes pregnant and wishes to be entertained. Her husband arranges that ten storytellers come to the court and each one of them tells one story per day. With five days altogether we come to fifty stories (frame story included), similarly like Decameron presents one hundred stories told by ten storytellers in ten days.

The story of Zoza has many elements which are repeated in the other stories as well, what glues otherwise unrelated stories in a stronger result. The same structure but told only by one narrator is of course 1001 Arabian Nights, with even more complexity with stories nested among stories told by characters of some stories which are told by other characters in other stories.

The language of Pentamerone is another major attraction. It is written in Neapolitan dialect, very likely the most difficult among dialects in the area of today's Italy. It has many borrowed words from Arabs, Frenchmen, Greeks, and Spaniards.

While providing a special layer of authenticity to the reader it also presents an important obstacle to everybody who doesn't understand Neapolitan - the majority of Italians included. The dialect in which Basile wrote Pentamerone set a standard to numerous collections of fairy tales made in next three centuries when folklorists started to preserve the language, customs, and stories of local people in different areas of the world.

With acknowledged similarities and differences the basics of national consciousnesses were set. Many small unstable city-states were united into much bigger, stronger and safer states.

The dialect proved to be a huge obstacle to translators. The first German translation was done by Felix Liebrecht in 1846, incomplete (only 32 tales) English by John Edward Taylor and complete by Sir Richard Francis Burton in 1893 (posthumously by his widow who enforced the publisher to print the work as it was, without any censorship).

The fairy tales in Pentamerone deal with numerous controversial subjects. The language is vulgar, many characters are often brutal, ugly, mean, hypocritical. The themes in the stories are adultery, cannibalism, incest, murder, rape, torture, ... Not exactly the material to read to your kids right before bedtime. These subjects were actually too much for an adult audience too, so the translations were heavily censored.

Pentamerone had a huge influence on all future writers and especially on fairy tale writers and collectors. Madame d'Aulnoy and Charles Perrault borrowed from Basile's masterpiece complete plots for their works. Brothers Grimm publicly thanked Basile for his contribution to literature.

Thousands of writers who never hear for this book or its author used parts of the stories from Pentamerone to create new, unique, yet already time-tested artworks. They (frankly, we) are actually still doing that and it looks next generation will continue to do the same. The dominant riches-to rags-riches plot looks attractive to be forgotten anytime soon.

8. Document of a Certain Time and Place

We have also mentioned the importance of The Tale of Tales as the first national collection of fairy tales. Dozens of important collectors, editors and writers took this work as an example of the collection as it should be done by themselves too. With fairy tale books specific customs of regions in Europe and the rest of the world were archived and preserved, countless interesting examples of beliefs, linguistic specifics or simply old facts stayed written to be available to posterity.

A lot can be learned about life, relationships and society just by reading the fairy tales. People who are able to learn from the past, can better understand the present and create appropriate foundations for the future. We all learn from the mistakes, but it's better to learn from the ones already made by others, isn't it?

9. Numerous Oldest (or Among Oldest) Versions of Today's Classics

The Tale of Tales righteously deserves its title. Many of popular fairy tales were published in this book for the first time or belong to oldest known versions.

10. Endless Inspiration for All Visual Arts

Clever plots, witty dialogues, and fantastic settings definitely call for the visual presentation of Pentamerone and its parts. One of the most attractive ones is definitely Matteo Garrone's movie Tale of Tales, available in DVD. This work is not for the faint-hearted audience, but each true cinephile should have this movie in his collection!

Have You Already Read Pentamerone?

Originally there was no happy endings at fairy tales, these came much later, at least two centuries later. First fairy tales were definitely more like cautionary tales and fantastic plots about possibilities of climbing the social ladder. Your point about multinational cast is very intriguing - while most of movie production this days in based on international cooperation, there's a lovely connection of old Napoli situation with today's world.

Tolovaj, Thank you for the images, information and products.
Do we know if Abbatutis was something that Basile or his sister came up with? It's perhaps an appropriate fit for the original crass violence but depressing for subsequent recycling into happy "fairy-tale endings."
It's interesting that the film Tale of Tales, which I've seen, has international, multinational cast and crew members, what with your observing that Neapolitan "has many borrowed words from Arabs, Frenchmen, Greeks, and Spaniards."

Thanks, WriterArtist, it's pleasure to see you again. Yes, we are lucky to have such literary treasure preserved, but at the same time we can only guess how many precious works was lost for different reasons. And, if I may add, while fairy tales in Pentamerone sometimes look weird to today's reader, they already had happy endings in most cases.

It is fortunate that all those early work were conserved and somebody (Author's sister) took the responsibility of publishing them. I have always liked fairy tales for the wild imagination and content of the era it was written. I am also fond of them because they contain morals and principles to be learnt. Moreover, they are my favourites because they have happy endings.

Hi, dustytoes. Most people never heard of Pentamerone, yet it's the backbone of dozens of classic fairy tales. I prefer looking at Basile as an writer/editor than writer/author, because most of the motifs in his book were already circulating in his environment. But he is the one who formed them into stories very similar to the ones we are familiar with today. Thanks for stopping by!

I've never heard of this. What wild imaginations this writer must have had! 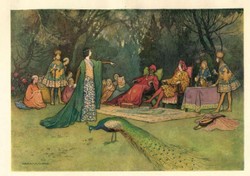 Hans Christian Andersen is famous author of fairy tales. Less known are similarities of his life with his fairy tales.
Loading ...
Error!