Finding fun Christmas gifts for adults can be challenging, but it is possible. Here are some interesting ideas.

Buying a Christmas gift can be quite a chore. First, it is important to determine that the recipient does not already own one of the same item. Of course, it is still possible you and another person will give the same thing to someone, but that cannot always be avoided. It is also a good idea to give something that will be used.

One thing you can do is listen for clues. There are many activities that a person might enjoy, so a little probing with questions such as “Doesn’t that look interesting?” or “Would that be a fun activity you might enjoy?” can certainly help you find a right direction.

Legos are popular, and adults are rediscovering Legos as they interact with their children.  I recently saw an advertisement for Legos for adults, sets that have a complexity that once the set is assembled the result is rewarding.

Here, in addition to the set, one might add a protective case so it can be displayed.

Painting can be a relaxing activity, but not all of us can paint.  Yet it might be something the person for whom you are shopping would like to try.  While the results may not be museum worthy, a paint by numbers set might be a good starting place to determine if painting is the activity that holds the person’s interest.  If so, they can develop their painting further.  But there must be a starting point, and this would be a good place to begin a hobby of painting.

Another good starting point would be a book or DVD that teaches painting.

Adults need to continually stimulate the brain.  Some games require skill.  Among them are chess, go, and mahjong.  These each require a set of pieces, but that is insufficient for success.  Strategy books are also important.

In the case of chess, the game is divided into the opening, series of moves, perhaps as many as ten, that determine how the game will evolve, the middle game, and the end game.  There are books for each part, and the middle game contains books on tactics and others on strategy.

While we are considering games of skill, bridge, a card game, requires quite a bit of study beforehand, and thought while playing.  Here, giving a deck of cards might be inadequate, but a good book might be acceptable.

Be certain to point out that in the absence of challenging opponents a good computer can substitute.  In fact, computers can be set to a level of difficult, and as one develops to a higher skill level the computer can be reset to that greater skill level.  When I first started playing chess I was advised to play those more skipped than I.  Playing a weak opponent can lead to lethargy, playing down to the level of one’s opponent, while playing a skipped opponent helps develop greater skills.  I think this should be the same for all skill games.

Puzzles can be jigsaw puzzles that are put together over time, some being quite challenging, or puzzle books such as collection of crossword puzzles or Sudoku.  As with so many other things, these can come at different levels.

Sudoku can also be found as a computer program, and worked one at a time with the difficulty level selected.

Making a gift basket containing several items from above, along with one or more good books, might be the way to go.  In that way you are more likely to have a success.  Remember, you are hoping not only for an activity your recipient has not honed skills in but also that it will be the activity that is rewarding enough to become a newfound interest for the other person.  An expression that an activity looks interesting does not mean it will become part of that person’s permanent interest.

Of course food works.  Cheese on a cheese board is always a possibility.  Select a nice board with a Christmas theme, and you have a wonderful gift.

This year physical items are likely to be in short supply due to shipping delays.  The earlier you shop the more likely you will find the gift you desire.

This article contains links to affiliate programs and Adsense advertising.  These must use cookies to allow for proper crediting. As a Viglink Associate, Zazzle Associate, and Amazon Associate I earn from qualifying purchases.

The Zazzle image uses art from WPClipart, and are in public domain with no limitations on usage.

I struggled with the title, since I did not want to imply any offensive content. I intended things used by adults.
As for the board, it is a Zazzle board I designed. I have not heard of durability. I was happy to find Lego made adult sets. This is big. The ship in a bottle is one of them. There are so many gift articles out there, but there is always a new twist one can put on an article.

blackspanielgallery, Thank you for practical information, pretty pictures and product lines.
These are all excellent suggestions.
Do you know how well the glass boards hold up over time? Do they survive cutting on them and washing, scrubbing, drying?
In particular, I like the ship in a bottle and the Mahjong. Also, I love the suggestion of mixed-gift baskets, like Christmas stockings, no? 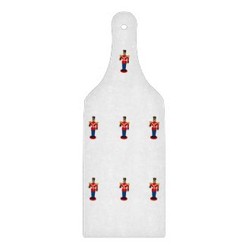