The Formula One racing teams head to the Nürburgring for the German Grand Prix on Sunday 7 July 2013.

Just a week after Pirelli became the most hated tyre company ever to be involved in motor racing after its exploding tyres nearly ruined the British Grand Prix, the teams and drivers are hoping that its promised improvements will make the German Grand Prix at the Nürburgring on Sunday 7 July 2013 much safer. The drivers, though, are leaving nothing to chance and have threatened to boycott the race should there be any sign of a repeat performance.

The fiasco of Pirelli’s tyres continued in dramatic fashion at the British Grand Prix with four drivers suffering from exploding rear tyres and others reporting problems as the tyre maker added yet another race to its list of events that it has come close to ruining this year. Pirelli came out with some lame excuses but at the end of the day most Formula One racing fans are awaiting just one announcement, and that is that the company will be gone from the grand prix circuit at the end of the season.

Whether that will happen is debateable, but the immediate worry is whether the problem can be fixed in time for the German Grand Prix at the Nürburgring on Sunday 7 July 2013. Pirelli is trying. The rear tyres have been changed for this race to the new Kevlar-belted versions but many teams are unhappy at the way Pirelli tried to blame them for the failures at Silverstone. The drivers are even threatening to boycott the race in protest should there be any sign of a repeat performance. Pirelli has said that these Kevlar-belted tyres will only be used for this race and has promised a brand new range of tyres for Hungary later in the month.

Meanwhile, championship leader and reigning world champion Sebastian Vettel will be hoping for more reliability in front of his home fans after his Red Bull shuddered to a halt at Silverstone. This has reduced his lead to only 21 points ahead of Ferrari’s Fernando Alonso, who finished third. Red Bull still did well in the constructors championship after Mark Webber, in his final British Grand Prix, came in second after a poor start; Webber has had enough of partnering Vettel after their race orders row earlier in the season and has announced he is retiring from Formula One at the end of the year.

Mercedes could have had a one-two Silverstone if Lewis Hamilton had not been one of Pirelli’s exploding tyre victims, and he still managed to finish fourth with his team mate Nico Rosberg winning the race. Rosberg too will be hoping for a good performance in front of his home fans.

There are mixed feelings as to what the drivers think of the circuit with some loving it and others hating it. Expect an exciting start as the cars hit the very sharp turn one while they are still all bunched up. This used to be a tricky track for overtaking but kers and DRS have changed that and there was thus lots of thrill when it was last held here. Lewis Hamilton won that race in 2011. Last year’s German Grand Prix was at Hockenheim and was won by Fernando Alonso.

Pirelli has selected its medium and soft compounds for the race and is predicting most teams will opt for three pit stops.

This could be the last race at the Nürburgring for some time with the circuit up for sale and its future in doubt.

Lotus has appointed engineering consultancy Altran as a technical partner to provide specialist engineering services for the remainder of the 2013 season. These will be delivered by a team of Altran UK engineers who will be based on site at Lotus’ Whiteways Technical Centre in Enstone, Oxfordshire. Altran was previously a technological partner of the Renault team for a decade.

The debate on who will replace Mark Webber at Red Bull next year is in full swing. Paul di Resta, as previously reported, is in the frame as is Lotus driver Kimi Räikkönen, who gets on well with Vettel. If Räikkönen did get the seat then di Resta to Lotus is a possibility, though with Force India improving as the season goes on that may be a backwards step. Di Resta, meanwhile, is also eyeing Felipe Massa’s seat at Ferrari as rumours grow that this may be the Brazillian’s last season with the Italian outfit. Also in the frame for the Red Bull seat are the two Toro Rosso drivers Daniel Ricciardo and Jean-Eric Vergne. And Jenson Button, not happy with the McLaren car this year, may also fancy a move. 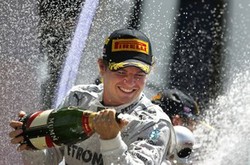