Going Under is a suspense novel set in the rough areas of London. This article covers research, factual details and the locations used.

When Karo steps in to stop a drowning, she finds herself in over her head. This article covers the notes, research, and background of the suspense novel by VH Folland. Featuring a chunk of London's underbelly and just how difficult it can be to get their head above water once someone drops off the grid.

These are a few notes about the area where it is set and some background for people unfamiliar with the culture and location where the book takes place.

When Karo saw the woman drowning in the canal, she did not think twice before diving in to save the victim. Too late, the teenager learned that the accident was not an accident.

Now the people who tried to drown Liz to keep her quiet want to make sure Karo does not say a word.

Going Under is a 40,000 word suspense novel by VH Folland, available for Amazon Kindle.

Most of the action for Going Under takes place in and around the London Borough of Newham. Once a thriving community, the area was heavily hit during the blitz (a map of bombs dropped is available here) and the closure of the docks in the 50's and 60's caused mass unemployment. While there was a lot of investment before the Olympics, Newham was until recently (and at the time Going Under was written) the second most deprived borough in London.

For a full summary of the history of the borough, there is an interesting article here.

Me? I just worked around there.

The London Borough of Newham

The London slums are unfortunately not fictional. Going Under was written before the Olympics, when there was an influx of money and redevelopment, which has hopefully improved some areas.

The Docklands are one of the most interesting areas of London, with the new Canary Wharf developments and high-tech offices right next to some of the poorer areas to live.

Karo's flat building with the broken doorlock was based on a friend's old flat. He - and the other people with rooms in the building - used to jam chairs under their room doors at night because the main door did not lock and nor did their individual ones. It wasn't unknown to find tramps sleeping in the hallway when we walked up to see him.

A feature on ITV news about Eastham and Newham slums

Have you ever been on a Canal?

As well as the River Thames, London has many smaller water ways. While many of its rivers, like the Wandle, were covered or forced into underground culverts, the canal network remains available. The most famous is probably Regent's Canal. The East London Canals often have problems with litter and vandalism, but despite this there is a thriving waterways community.

For general information on London's canals, the Canal Museum has more details, including maps.

The canal is a real place, a little outside Newham. I have taken a few liberties with the depth and the lock formation, so people familiar with the area should probably assume Karo's walk home is not a short journey. The lock is similar to the one on the left (which shows one in Camden).

A video from cyclist bmxxxx included below shows an East London Canal, and gives a good idea of the type of canal path, and the state of the canal, that Karo walks along so frequently.

Race in Going Under

For some reason having a non-white protagonist means this seems to be the first thing everyone asks about, so I will tackle it up front.

Aside from Karo's own mixed-race background, I've left the racial background of characters deliberately open.

This has had one very interesting result: the number of reviewers who have brought their own background to it. The American reviewers tend to insist the gang members must be black, while the protagonist is white. British reviewers, particularly those that know the area it is set in, reverse that.

I was actually asked why Karo 'had to be' mixed race. The answer was simply because I wanted her to be the average for her area, and the area of London where the story is set is majority non-white. Blending in is her first and only defence, and it would be difficult to be overlooked by good or bad guys if she wasn't average.

When it comes down to it the focus of Going Under is less race than class and poverty, and the unfortunate fact that in today's society, once you fall off the ladder, getting back on can be nearly impossible.

Should Going Under have a sequel?

Originally this was a triology, but I changed my mind. Should I release a sequel? 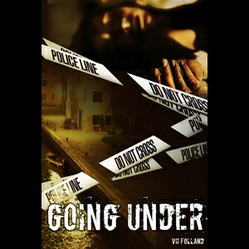