The Halifax Disaster was a blast of apocalyptic proportions. At 2.9 kilotons, it was the largest explosion in the world before the advent of nuclear weapons.

One was carrying 2400 metric tons of explosives destined for the First World War's front line. Around 2.9 kilotons of TNT detonated alongside North America's premier port city. The blast was heard throughout Nova Scotia, plus New Brunswick and the US state of Maine.

A pyrocumulus cloud rose nearly 12,000ft in the air, scattering debris over a range of several miles. At ground zero, there was nothing left at all.

This is the story of Canada's biggest man-made disaster.

The Sound of the Halifax Explosion

They say it was silent at ground zero. At 9.04am, as the SS Mont-Blanc was lifted over 1,000ft in the air, shattering into its component parts, there was no sound at all. 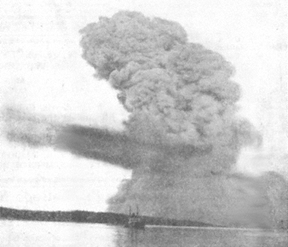 Ships and smaller vessels were carried across the harbor by the force of the blast. Survivors within them all remarked later that they had heard nothing as it happened.

It was as if all sound had been sucked from the universe.

Of course, there was something to hear, but the explosion caused an energy wave that rushed out at 3821 feet (or 1000 meters) a second. The speed of sound is 1164 ft (340 meters) per second, but the force of the blast took the noise to that limit at three times the speed.

People caught within the vicinity of the blast site might as well have been deaf. Some almost certainly did have their ear-drums ruptured instantly by the sudden decrease and equally sudden increase of air pressure.

But the blast was well and truly heard elsewhere. Sailors on HMCS Niobe, anchored just 500 yards (457 meters) away, discerned the noise like a physical assault. As the blast sent them flying across the ship, with debris raining down, they were all trying to cover their ears. Something that loud hurts.

Nor was it only those close by who heard it. Anyone within a circumference of 1300 miles detected that almighty bang from Halifax, as the sound waves rushed out.

It was a region the size of Germany, stretching from Cape Breton and Prince Edward Island in the east, up through Tracadie and Woodstock in New Brunswick, into parts of Maine in the USA and way out into the Atlantic Ocean. That distance looks like this.

Sound Radius of the Halifax Disaster

Everyone within this circle heard the Halifax Explosion. It was THAT loud.

The History of the Halifax Disaster So Far

Did you miss parts one and two? They are here.

Halifax Explosion Pt 2: Nineteen and a Half Minutes to Disaster
Could the Canadian port of Halifax have been saved, if more had been done in those desperate last minutes before the catastrophic explosion of 1917?

Halifax Explosion: The Largest Man-Made Explosion Before Atomic Bombs
1600 dead. Over 9000 injured. 400 permanently blinded. One of the greatest single day disasters of the First World War didn't happen on the front line, but in Canada.

The People at Ground Zero During the Halifax Explosion

Thousands died instantly as the massive shockwave rushed out from the exploding SS Mont-Blanc. Others perished in the debris storm and tsunami. 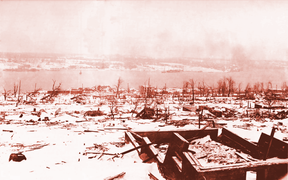 On board and alongside the SS Mont-Blanc were twenty-six men whose bodies were never found.

Seven navy men, and nineteen crew members of the Stella Maris, had been attempting to fit a tow cable to the deck of the burning vessel. The sheer force of the blast disintegrated them entirely.

Survivors of the Stella Maris, sheltered in the hold, sustained critical injuries.

The blazing SS Mont-Blanc had been stuck against Pier 6, at the foot of Halifax's residential Richmond District. Several industrial sites and warehouses were in the vicinity. Crowds had gathered and four different fire brigades were trying to put out the fire.

At ground zero, it obliterated everything.

Within a radius of 1.6 miles (2.6km), lungs puffed up like balloons and ruptured; heads and limbs were blown off; buildings toppled; and white hot, molten iron rained down. Even sturdily built factories couldn't withstand the onslaught. The Acadia Sugar Refinery and the Hillis & Sons Foundry both simply ceased to exist, along with all of the workers inside them. The Nova Scotia Cotton Mill saw its upper concrete floors give way, crashing down onto the factory floor.

Gas pipes cracked and warped, lifted clear of the ground. Stoves fell and hearths shattered, sending burning fuel into the polluted air. Secondary mini-explosions and house fires quickly engulfed the city. Those trapped in the rubble couldn't flee those infernos.

Every glass window in Halifax shattered, filling the air with fatal shards. One man was saved by the fashions of the day. Glass sliced into the high collar of his shirt, but didn't penetrate the starch. Hundreds of others weren't nearly so lucky.

Too many individuals had been standing at their windows at the instant of the blast. They'd been watching the drama unfolding down at the harbor's edge. Now their unprotected faces bore the brunt of flying glass. Six hundred were blinded in the Halifax Disaster. Nor was it over yet.

There was still the tsunami to come. In that, a whole people would perish.

The Halifax Explosion in Shattered City

This is how a made-for-TV movie imagined the 1917 disaster to have looked. There are some inaccuracies, but it grasps the general scale of the destruction.

Tsunami in the Halifax Disaster

Those who had survived the blast had another horror en route just seconds afterwards. 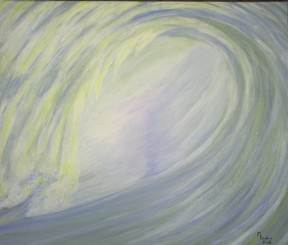 The depth of water in Halifax Harbour is 59 feet (18 meters) at low tide. Yet there were survivors flying across the harbor in their rowing boats, who swore they saw the sea-bed exposed for a few seconds there.

All of that displaced water had to come rushing back, and it did.

Less than a minute later, a tsunami over-ran the high water mark by 60ft. A wall of water gushed over the ravaged Richmond District, as far up as Barrington Street, then sought to drag anything in its path back out into the harbor.

Upon the waters itself, the Norwegian relief ship SS Imo - which had crashed into the SS Mont-Blanc twenty minutes previously, causing the flames that began the disaster - was now carried high on the rising tsunami.

Captain Hakkon had already been killed in the blast, along with three high-ranking mates on the bridge, but the ship's helmsman had hitherto survived. Johan Johanssen was knocked unconscious in the explosion. He came around to find himself neck-deep in water in the harbor, until the receding tsunami wave carried him back onto the deck.

The SS Imo itself was deposited onto the shores of Dartmouth, where it remained for months afterwards.

On the Dartmouth side of the harbor, in Tufts Cove, a tribe of Mi'kwaq had their settlement. These First Nation people had been living alongside those waters since long before Europeans came, with their cities, ports and munitions ships.

The tsunami that raged outward, across both sides of the harbor, hurtled headlong into their cove. There were no survivors.

The Death Toll from the Halifax Explosion

Halifax lost nearly 2,000 people in its 1917 disaster. The causes were manifold.

It is believed that 1,500 people died instantly, mostly from the effects of the shockwave, though some drowned in the tsunami.

Another one hundred were killed within the hour. The fires overwhelming Halifax saw to that, as did being trapped in the rubble of collapsing buildings.

9,000 others were injured, some critically. One of Halifax's three hospitals had been totally obliterated in the blast. Another was half destroyed with patients trapped inside.

To add to the toll, a ship just out of harbor - which escaped damage - brought in 1,000 Canadian men injured in the First World War. They arrived that morning to receive medical treatment in Halifax's hospitals. That made 10,000 people to be cared for in one and a half hospitals.

Further complications came with the following morning. The heaviest snow blizzard in a decade bombarded the city and remained there for the entire weekend. Massive drifts covered the railways tracks, delaying or stopping outright relief trains heading into the city.

25,000 people were rendered instantly homeless. They huddled in public buildings, crowded into the homes of friends, or else sheltered in tents raised on the Halifax commons.

Even those properties still standing were without windows to protect inhabitants against the icy wind and driving snow. Those within dared not light fires with live gas pipes damaged in the blast. Exposure became the last of the dangers associated with that terrible day in 1917.

An estimated 1,900 people were eventually killed in the Halifax Disaster, though some survived it by days or weeks, dying slowly of their wounds. To put this into context, Halifax lost 1,360 on the Western Front. The city lost hundreds more people in that explosion, than it had in the rest of World War One.

Survivor Stories from the Halifax Explosion

Read some of the amazing recollections from those who lived through the Halifax Disaster in 1917.

If two of you are asking, I'd better schedule it in then! If you discover more on a personal note, from your genealogical research, please do report back to us. :)

There is. My husband's relatives now have a branch in Dartmouth so I know the area on both sides of the inlet was rebuilt, but how and when remain a mystery.

I hadn't thought to do so, but I certainly will if there's the interest.

Are you doing what happened nexgt?

Halifax Explosion Pt 2: Nineteen and a Half Minutes to Disaster

Could the Canadian port of Halifax have been saved, if more had been done in ... 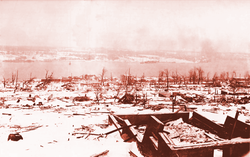 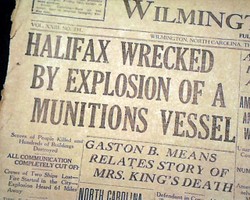 1600 dead. Over 9000 injured. 400 permanently blinded. One of the greatest single day disasters of the First World War didn't happen on the front line, but in Canada.
68%  10   5 JoHarrington
World Wars 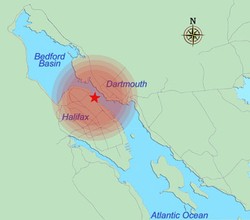 Halifax Explosion Pt 2: Nineteen and a Half Minutes to Disaster

Could the Canadian port of Halifax have been saved, if more had been done in those desperate last minutes before the catastrophic explosion of 1917?
Loading ...
Error!